Top
Previous Article
Next Article
Summer 2011 : Through Whirlwind and Calm

Anne and John Mendelsohn look back on their team approach to marriage and conquering cancer, as his 15-year tenure as MD Anderson Cancer Center president is winding down.

May 5, 2011, was a night of celebration. It featured celebrities, festivities and a baseball field full of friends contributing funds to cancer research and paying tribute to MD Anderson’s 70 years of progress toward eliminating the disease.

But the evening’s big stars were neither the entertainers, nor the 2,000 attendees. Rather it was a team of two whose lives are dedicated to conquering cancer.

As he prepares to step down after 15 years as MD Anderson’s president, John Mendelsohn, M.D., and his wife, Anne, were the event’s honorees. They have also been recognized with the establishment of the Anne and John Mendelsohn Personalized Cancer Therapy Fund.

“In 1980, I began a research program that targeted the product of an abnormal gene that can cause cancer,” he says. “I’m very excited to be returning to this area of research, armed with the huge advances in technology and understanding that have occurred during the past 30 years.

“I also am extraordinarily grateful for the trust that MD Anderson and generous donors are putting in us by establishing a fund in our names for this institution-wide venture in personalized therapy.”

“The fund is wonderfully generous and very meaningful,” Anne Mendelsohn says. “Whatever can be done to help decrease the suffering and the toll cancer takes is really important to me. I feel strongly about this great institution because it has such dedicated, mission-oriented people.”

Anne and John Mendelsohn met during a “massive blizzard,” according to Anne, at Harvard Yard during an engagement party of mutual friends. And it’s as if the snowstorm symbolized the whirlwind of activity that would accompany the calm in their lives.

“It was apparent to me almost immediately that I wanted to share my life with this woman,” he says. Within a few days, they’d gone on their first date. That very night, two of John’s friends told him that he was going to marry Anne.

“An observation I didn’t dispute,” he says.

A year and a half later, the Mendelsohns married in 1962, between John’s junior and senior years in medical school.

We’re in this together

It is common knowledge that teamwork is essential to a good marriage, but it often takes time to learn. The Mendelsohns got it right from the start.

Anne and John Mendelsohn
cut their wedding cake in 1962.

“We used the team approach planning the personal and professional aspects of our lives together. We’ve been doing this for nearly 50 years. Teamwork is part of the commitment we made in creating a family and sharing love and life together,” he says.

“Whenever we’ve moved, we’ve always not only analyzed the opportunities, but also the community because we agreed that wherever we are, we’re going to be very active joiners. Anne is incredibly flexible because the prime mover each time was an opportunity for my career.”

Initially, the Mendelsohns moved frequently during his specialty training, until they landed in La Jolla, Calif., at the new medical school of the University of California at San Diego for 15 years. After that, there was an 11-year stint in New York City at Memorial Sloan-Kettering Cancer Center. During that time, they were blessed with three sons, Andrew, Jeffrey and Eric.

“When it would come time to take the next move, it was always an interesting challenge for me,” Anne says. ‘What am I going to do when I grow up this time?’ I would ask myself. I’d also have to analyze where we were as a family because I wanted to be there for the children. That sometimes meant engaging in work, such as freelance photography, during their nap times.”

A winning combination and tradition

They attribute their successes to a combination of “thorough planning, karma, sharing all challenges together, good health and good luck,” according to John.

Tradition is important to them, too.

“Every summer for 50 years, we’ve gotten together in August at our family camp. It’s part of a nature preserve formed more than 100 years ago around a lake in Pennsylvania,” Anne says.

“It’s a wonderful multi-generational place where everyone interacts. With our sons and their families spread out in New York, London and San Francisco, it’s an important and meaningful time of the year for us to be together.”

Their eight grandchildren, ranging from ages 3 to 16, are the sixth generation to take part in this tradition that goes back to her great-grandmother.

In addition to the extraordinary amount of time they commit to MD Anderson, the Mendelsohns also are active in the community, particularly in initiatives supporting the arts and education. 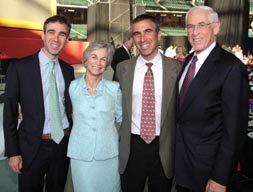 The Mendelsohns with two of their sons, Eric (left) and Jeff.
Photo: Pete Baatz

“Education is important to me because I think it’s one of the underpinnings of our country. It has to be available for all and is critical for the future,” Anne says. “My great-grandparents went to college, and supporting education has always been a traditional family commitment.”

Anne has chaired the boards of the Museum of Natural Science in Houston, as well as the Houston Chapter of Teach for America. She also has served on the executive committee of the Greater Houston Community Foundation and the Buffalo Bayou Partnership, in addition to serving on the board of what is now the Hermann Park Conservancy, as well as the Alley Theatre.

John has been active in many local, state and national organizations and serves on the boards of the Houston Grand Opera, the Center for Houston’s Future and BioHouston. The couple has been honored together with eight awards, including the Woodrow Wilson International Center for Scholars Award for Public Service in 2005.

Beyond MD Anderson and their community involvement, the Mendelsohns share an interest in sports, including tennis, biking and hiking.

They also are proud that they’ve instilled that same sense of exploration and adventure in their children.

“We are very close to our children and their families and fortunate in that they always seem to seek our advice and help,” Anne says.

Their passion for MD Anderson

The Mendelsohns are very generous with their time to MD Anderson. In fact, it’s around the clock.

“And we rarely go to the movies,” Anne chimes in. “Our service to MD Anderson is another part of the team approach.”

Part of that passion is personal. Anne’s family has not been immune to cancer diagnoses.

“I lost my mother, my father and my brother to cancer. When we came here, I decided not to pursue another professional career. Part of that was to be free to help the cancer cause and John in whatever way I could. We really believe in what we’re doing for the institution.”

“We’re very proud of MD Anderson,” John says. “We don’t hesitate to brag about it and its people, and what it accomplishes. We couldn’t be ambassadors for a place we didn’t believe in.”

“Cancer has always interested me intellectually,” Anne says. “When we first discussed focusing on it, it kept rearing its ugly head in my family. I felt that it was important to be an advocate for getting the very best possible treatment, and living a healthy lifestyle.”

The Mendelsohns are ambassadors, as well as good role models, for healthy living. John speaks routinely about the importance of smoking prevention and cessation, along with healthy diet and exercise. Anne agrees.

“My grandparents and my parents ate whole grains, fruits and vegetables,” Anne says. “I never saw a piece of white bread at my house. Desserts tended to be applesauce or fresh fruit. But it’s tragic because, even though they lived in an otherwise healthy way, that generation smoked.” 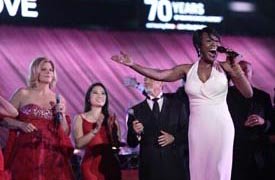 As their commitment to eradicating cancer continues, so does their enthusiasm for escalating progress that, in part, is fueled by philanthropic support. As a result of the 70th anniversary event, MD Anderson has raised $4.3 million for the Anne and John Mendelsohn Personalized Cancer Therapy Fund.

“Because of the recent progress science has made, particularly at the genetic and molecular level, there’s never been a more exciting time to be in the field of cancer research,” John says.

“I am committed to doing what I can to translate the many new scientific discoveries about cancer into better treatments to ease the burden of cancer on future generations. We’re extremely grateful for the trust so many donors place in us.”

A belief in possibility
By any measure, MD Anderson’s growth in size, stature and scientific progress during the past 15 years is staggering.
A golden beacon
When John Mendelsohn, M.D., returns to research at MD Anderson, he’ll open a new chapter in his career at a cancer center vastly different from the one he came to Houston to lead in 1996.
New approach to cancer treatment
Mendelsohn helps pave the way for personalized therapies
Growing our way to success
Mendelsohn stresses employee engagement and opportunities
With portfolio