But it’s not for singing the roles of Don Carlos or Cavaradosi, Falstaff or Figaro. 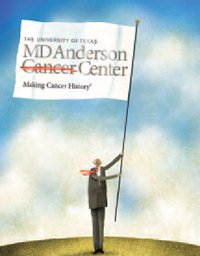 “When he talks, people listen — and they listen for good reason,” Freud says. “He has tremendous wisdom, authority and knowledge of how organizations work and succeed.

“He also has a great passion for opera. I was delighted to have him on the board because he truly understands and values world-class quality in the artistic and cultural realm and knows what makes good business sense.”

Freud isn’t alone in his praise and appreciation of Mendelsohn. Local, regional, state and national leaders speak highly of the qualities he brings to his commitments — in the arts, science, medicine and business.

In his 15 years as president, Mendelsohn has taken MD Anderson’s name far beyond the Houston campus.

“Under John’s leadership, MD Anderson greatly increased its national and international profile and sphere of influence,” says Patrick Oxford, immediate past chairman of the Greater Houston Partnership, who also served on The University of Texas System Board of Regents from 1997 to 2003.

“First, John and the entire MD Anderson team are sharply focused on curing cancer. I’ve been in meetings when John kindly asked, ‘OK, and how does that help us cure cancer?’ Second, he has the gift of translating science into language that even non-scientific types like me can understand. This has endeared him to many in the giving community and state government. Finally, he and his wife never, ever quit working for MD Anderson.”

At the Institute of Medicine (IOM), Mendelsohn’s contributions span the spectrum of cancer science and patient care — from nanotechnology to large-scale research to personalized medicine — and include his prominent role in defining national policies for continuing care of cancer survivors, says Harvey Fineberg, M.D., president of the institute.

“Since his election to the IOM in 1997, Dr. Mendelsohn has brought deep experience, expertise and creative talent to IOM’s National Cancer Policy Board and Forum and to many IOM studies and workshops,” Fineberg says.

He also has made significant contributions at the state level. For example, he has helped secure for MD Anderson $100 million for cancer research from the tobacco industry settlement, bonds to build new facilities or make improvements and approval of a constitutional amendment that enabled legislation to establish the Cancer Prevention and Research Institute of Texas with funding for cancer research.

In 2002, Mendelsohn founded and serves as vice chair of BioHouston, Inc. This organization helps connect scientists working toward commercializing their discoveries with the funding and development expertise required to turn great ideas into marketable products.

“Over the years, Dr. Mendelsohn has provided an equal amount of vision and support,” says Jacqueline Northcut, the company’s president and CEO. “Without his vision, we would not be poised to create a vibrant life science industry in Houston.

“As this industry grows, not only will it produce products that save and improve lives, but it also will drive growth in the city’s economy — positively impacting lives. He saw that potential when he arrived and has paved the way for it to become a reality.”

Looking ‘over the horizon’

For Eugene Vaughan, founding chairman of the Center for Houston’s Future, “John Mendelsohn is a consummate community-enhancer, whose inspiring leadership creates a wider vision of life and possibilities in Houston.

“In 1999, we were having dinner before an opera and toward the end of the meal, I asked John if I could tell him about an idea I was hatching. I laid out the concept for the center. John became animated and said, ‘That is exactly what Houston needs. May I be your first director?’”

Vaughan attributes the center’s realization to Mendelsohn’s “zestful embrace of the idea, accompanied by his amazing offer of personal involvement. Today, he is an active board member of the center — the only organization of its kind, concentrated on looking ‘over the horizon’ to prepare the Houston region for the problems and opportunities hurtling at it.”

Mendelsohns take team approach to marriage, conquering cancer
Anne and John Mendelsohn look back on their team approach to marriage and conquering cancer, as his 15-year tenure as MD Anderson Cancer Center president is winding down.
A belief in possibility
By any measure, MD Anderson’s growth in size, stature and scientific progress during the past 15 years is staggering.
A golden beacon
When John Mendelsohn, M.D., returns to research at MD Anderson, he’ll open a new chapter in his career at a cancer center vastly different from the one he came to Houston to lead in 1996.
New approach to cancer treatment
Mendelsohn helps pave the way for personalized therapies
Growing our way to success
Mendelsohn stresses employee engagement and opportunities
Key to the future
Emphasis on learning prepares next generation of professionals
Mendelsohn's vision leads to expansion far beyond Houston
Eliminating cancer in Texas, the nation and the world always has been an institution-wide pursuit.
Mendelsohn's energy, creativity support record philanthropic efforts
Business entrepreneur and philanthropist Red McCombs of San Antonio tells a story about his family foundation’s $30 million gift to MD Anderson in 2005.
Nurses use evidence-based practice to improve care
This is the third installment of a three-part series on nursing that began in the fall 2010 issue of Conquest.
Compression stocking change guards against VTE
Project leads to improved blood pressure devices
Nurses sway long-standing child visitation policy
Cancer survivor enjoys hitting the ski slopes
Faith and spirituality weave themselves through all aspects of John Holland’s life — family man, business manager, community leader, outdoor enthusiast and cancer survivor.
Conquest Audio - Summer 2011