Key to the future

Emphasis on learning prepares next generation of professionals

Understanding how academic mentors helped shape his career, John Mendelsohn, M.D., has often stressed: “We must do everything possible to strengthen training for the next generation of oncology and other health care professionals.” 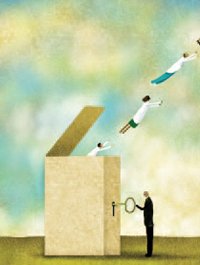 The result has been a prolific expansion of MD Anderson’s educational programs — a major milestone of his presidency.

“As part of The University of Texas System, MD Anderson has always placed a high priority on education. From the first, Dr. Mendelsohn was enthusiastic about enhancing our teaching activities at all levels, and, most important, he was front and center in our efforts to attain degree-granting status,” explains Stephen Tomasovic, Ph.D., senior vice president for academic affairs.

Mendelsohn has emphasized excellent training for future physicians and scientists, nurses and allied health professionals. He has encouraged mentoring across the teaching spectrum, broader continuing education for faculty and adding services aimed at motivating people to reduce their cancer risk through healthier lifestyles and regular screening exams.

But it was Mendelsohn’s commitment to MD Anderson’s status as an academic university that long-time faculty leaders most appreciate.

Soon after assuming the presidency in 1996, Mendelsohn began working closely with senior leaders to convince the Texas Legislature and the Texas Higher Education Coordinating Board that MD Anderson should grant degrees.

In 2001, the institution conferred its first 13 baccalaureate degrees in five allied health disciplines. Until then, students completing those programs received only certificates.

“Obtaining degree-granting status recognized the excellence of our allied health training, which MD Anderson began in 1949 with a program in histotechnology.

Dr. Mendelsohn’s role in this achievement was enormous,” notes Michael Ahearn, Ph.D., dean of the School of Health Professions, which now awards degrees in eight disciplines.

Mendelsohn “put his full weight behind our goal of becoming an academic university,” Ahearn says. “He made numerous trips to Austin to meet with legislators and Coordinating Board members before we received approval to grant degrees.”

Allied health students have increased from 35 in 2000 to 300 expected for the 2011 classes. About 40% of the school’s 2010 graduates were hired at MD Anderson, while others were in high demand across the country.

‘A celebratory day’ and accreditation

The next historic educational event occurred May 11, 2002, when MD Anderson awarded advanced degrees jointly with The University of Texas Health Science Center at Houston to students at the Graduate School of Biomedical Sciences (GSBS).

Mendelsohn proclaimed the GSBS commencement “a truly celebratory day” for students receiving 33 doctoral and 12 master of science degrees as well as for MD Anderson and its faculty. They have provided substantial support and laboratories for GSBS students since the graduate school was established in 1963.

Tomasovic says Mendelsohn “was very helpful as we prepared our application for accreditation.”

Receiving the initial five-year accreditation from the Commission on Colleges of the Southern Association of Colleges and Schools (SACS) in 2005 affirmed MD Anderson as a leading educational institution. Besides the prestige factor, accreditation is required for students to obtain financial aid from the federal government and other funding sources.

Education for surgeons, nurses and the public

Raphael Pollock, M.D., Ph.D., head of the Division of Surgery, is always happy when Mendelsohn states that MD Anderson’s postgraduate training programs are among the most competitive and productive in the country.

“That’s especially true for our surgical oncology fellowships. Typically, we can accept only 8% of the applicants. In the past 15 years, about 85% of our graduates have gone to academic institutions, and many are in leadership positions,” Pollock says. 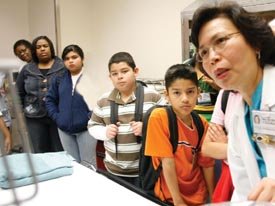 Almost 7,000 students and trainees took part in MD Anderson’s diverse teaching programs in 2010. Since 1996, the number of clinical residents and fellows has nearly doubled, while research trainees and postdoctoral fellows have tripled.

In addition, nursing students receiving clinical training reached a record 2,776 last year, up more than 1,000% from a decade ago.

“Dr. Mendelsohn understood that education was a key component of MD Anderson’s mission and ensured that it remained strong and grew with the institution’s other mission components,” Tomasovic says.