Top
Previous Article
Next Article
Summer 2011 : Fundraiser: On the Money

Business entrepreneur and philanthropist Red McCombs of San Antonio tells a story about his family foundation’s $30 million gift to MD Anderson in 2005.

Fascinated by the announcement of a $135 million South Campus Research Initiative (SCRI) and its potential impact on cancer care and research, he decided to give MD Anderson an unsolicited $25 million to jump-start donations. 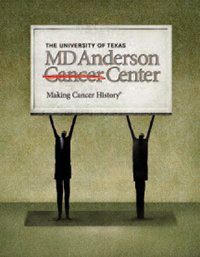 “John was gracious and excited,” McCombs says. “And being the great salesman he is, he called me back in a couple of days and said, ‘If there’s any way you can make that $30 million, it would exponentially increase the value.”

McCombs thought about the difference the extra $5 million could make for cancer patients and their families everywhere.

“Then, suddenly, a light came on,” he quips. “I realized I’d better get this settled because John may call again.”

Today, the Red and Charline McCombs Institute for the Early Detection and Treatment of Cancer is an important part of MD Anderson’s South Campus.

“Not only did he bring his unequaled expertise in cancer to the job, but he also brought his energy and creativity,” Bush says. “It was an honor to serve as chair of the BOV under his leadership.”

According to Patrick Mulvey, vice president for development, who has watched philanthropy dollars increase during the past 15 years, it’s hard to put a price on Mendelsohn’s fundraising efforts.

“He’s worked hand-in-hand with the Development Office, giving generously of his time to ensure we meet and often exceed our fundraising goals,” Mulvey says. “His active role in clearly defining the institution’s philanthropic objectives and in securing financial resources for programs that need funding has made an indelible mark on the institution.

“A key component of that expertise is his ability to communicate to donors the significance of their gifts — whether $25 or $25 million — to MD Anderson’s mission to eradicate cancer. He inspires confidence in this mission, a key ingredient in our donors’ decisions to invest their philanthropic dollars in our institution.”

“On John Mendelsohn’s watch, MD Anderson met its original $1 billion goal two years early,” says Nancy Loeffler, chair of the BOV. “What an extraordinary accomplishment that speaks to Dr. Mendelsohn’s phenomenal skills as a leader and a motivator. We owe much to this great man and his wife, Anne, who have contributed enormously, not only to MD Anderson, but also to the world.”

In 2007, oil and gas industry leader and philanthropist T. Boone Pickens gave MD Anderson $50 million. Pickens, a life member of the BOV, attached a unique requirement to the gift.

The institution was expected to grow the $50 million to $500 million within 25 years. In October 2008, MD Anderson formally dedicated its 21-story, 730,000-square-foot T. Boone Pickens Academic Tower in Pickens’ honor.

In September 2010, MD Anderson announced it had raised the $500 million, more than 20 years ahead of deadline.

Another superlative gift came from Jan and Dan L. Duncan through their family foundation in spring 2008: $35 million — the largest gift ever made to a cancer prevention program in the nation.

The Dan L. Duncan Family Institute for Cancer Prevention and Risk Assessment builds on MD Anderson’s achievements as a pioneer in cancer prevention.

“John Mendelsohn is a remarkable leader and visionary, and we’re thrilled that our family has had the opportunity to work with him, and with the MD Anderson family, to bring hope to our world,” says Jan Duncan, an associate member of the BOV and a director of the Dan L. Duncan Family Foundation, who continues her husband’s legacy of giving since his death in March 2010.

Ernie Cockrell, former BOV chair who led the SCRI in 2005, sums it up: “John Mendelsohn will be remembered as a builder. He’s had audacious goals, and he’s achieved them. That’s the real mark of Dr. Mendelsohn.”

By Sandi Stromberg
Key to the future
Emphasis on learning prepares next generation of professionals
Mendelsohn's vision leads to expansion far beyond Houston
Eliminating cancer in Texas, the nation and the world always has been an institution-wide pursuit.
Nurses use evidence-based practice to improve care
This is the third installment of a three-part series on nursing that began in the fall 2010 issue of Conquest.
Compression stocking change guards against VTE
Project leads to improved blood pressure devices
Nurses sway long-standing child visitation policy
Cancer survivor enjoys hitting the ski slopes
Faith and spirituality weave themselves through all aspects of John Holland’s life — family man, business manager, community leader, outdoor enthusiast and cancer survivor.
Conquest Audio - Summer 2011