Eliminating cancer in Texas, the nation and the world always has been an institution-wide pursuit.

An artist's rendering of Banner MD Anderson Cancer Center, which is set to open in September.

However, in the past 15 years, this global part of MD Anderson’s mission has played a noticeably larger role in the growth of the institution, taking what it means to eliminate cancer on an international scale to a whole new level. 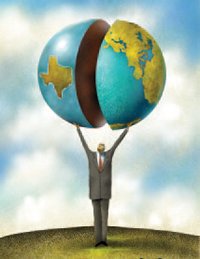 “Early in his tenure as president, Dr. Mendelsohn had a vision of how to make our international engagements more strategic,” explains Dan Fontaine, senior vice president for Business Affairs and founding member of MD Anderson’s Center for Global Oncology (CGO). “He wanted to do more than share our knowledge with others; he wanted to extend what we do in those environments and have more structured relationships.”

Oliver Bogler, Ph.D., vice president for Global Academic Programs, credits the network’s soaring growth to Mendelsohn. “Everywhere he goes he raises a lot of enthusiasm. He’s such an inspirational figure in cancer research that many people want to work with us because of him, which makes it easy to form relationships.”

Such was the case in 2008, when the German Cancer Research Center (DKFZ) was added to the sister network. While the two institutions had a long-standing relationship for more than 15 years, the formal agreement provided clearer parameters on future projects.

“Complementing expertise is one of the decisive factors for a successful partnership,” says Prof. Dr. Otmar D. Wiestler, director of DKFZ. “Our translational research is of increasing importance. Here, we learn from MD Anderson. In turn, MD Anderson benefits from our basic research expertise.”

A small step outside 1515 Holcombe

Although the CGO was officially established in 2008, the genesis of what the center is tasked with today began with the Radiation Treatment Center in Bellaire in Greater Houston, according to Amy Hay, associate vice president for Global Business Development.

“From the moment we were brave enough to step outside our walls, we were redefining what it means to eliminate cancer on a global scale. We may not have known it at the time, but we were starting it,” she says. 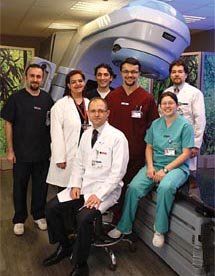 The Bellaire facility opened in 2000, offering MD Anderson’s brand of radiation therapy to the community for the convenience of patients.

“Over time, patients seeking our services increased, employee satisfaction went through the roof, and it became a little Mecca of success,” Hay recalls.

Soon after, they replicated the winning model in five more locations around the Greater Houston area to accommodate patient growth and ease of access. These have grown to encompass other modalities of cancer care and are known collectively today as MD Anderson’s regional care centers.

During the next 10 years, MD Anderson’s radiation oncology programs would travel beyond Texas and outside the U.S. borders: in 2007, to Presbyterian Kaseman Hospital in Albuquerque, N.M.; and, a year later, to the first overseas location, launched with American Hospital in Istanbul, Turkey.

The next big step

CGO’s formation was the result of recognizing a need to concentrate global research and clinical and business efforts into one area.

Today, expansion efforts are evolving to include collaboration with other premier institutions offering more of the full spectrum of MD Anderson’s renowned patient care services.

The opening of Banner MD Anderson Cancer Center in September in Arizona will be the first of its kind — a comprehensive, integrated, multidisciplinary center that is co-branded with MD Anderson in another state.

“It was always Dr. Mendelsohn’s belief that curing cancer is not going to happen by staying in Houston,” Hay says, “but we had to go about doing it in a ‘stepped’ approach. We had to prove to our faculty and staff that we’re committed and dedicated to ensuring that those programs are of MD Anderson quality.”

Fontaine agrees that Mendelsohn’s core legacy is growing the institution and its global mission.

“Right from the start, Dr. Mendelsohn wanted to have a big impact. He recognized without global engagement MD Anderson would fall behind other institutions. His vision positioned us prominently in the scientific and medical world, which will continue to help eliminate cancer around the world.”