Consider two drivers, each with a key that fits the same car. Driver 1 wants simply to turn on the ignition and leave the vehicle idling, ready and waiting to roll. Driver 2 wants to take it on a destructive joy ride.

Such is the case with two proteins identified by MD Anderson scientists that fit onto the same binding site of an important cellular growth factor receptor, called FGFR2, with starkly different results. 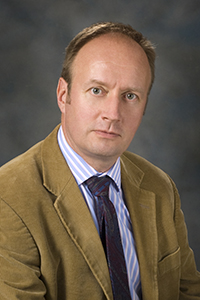 “There’s competition for binding to FGFR2, and one of the two competitors, phospholipase Cγ1 (Plcγ1), will increase cancer cell metastasis (spread). The other protein inhibits the opportunity for this to occur,” said John Ladbury, Ph.D., professor in Biochemistry and Molecular Biology.

Ladbury is senior author of a paper published online in January at Nature Structural & Molecular Biology that describes the competition and identifies Plγcl’s role and its relationship to the metastasis-blocking growth factor receptor-bound protein 2 (Grb2).

In a 2012 paper in the journal Cell, Ladbury and colleagues showed that Grb2 binds to FGFR2 and holds it in check, ready to be activated by a growth factor to signal other proteins. In performing this role, Grb2 blocks the binding of other proteins such as Plcγ1.

The protein with the highest concentration levels in the cell wins the contest to bind to FGFR2, or fibroblast growth factor receptor 2, Ladbury said. “In cells with depleted Grb2 concentration, Plcγ1 gets on the receptor, increasing cellular motility — equipping cells to move, escape the tumor, invade other tissue and spread.”

Quantifying the relative concentration of these two proteins in a patient’s tumor, Ladbury said, might  be developed into reliable markers for gauging the likelihood that the cancer will spread, and guide treatment decisions.