Eliminating cancer is going to require collaborations with doctors and hospitals around the world. Establishing and maintaining those connections are a big part of what the MD Anderson Cancer Network® is all about.

For MD Anderson Cancer Network members, ending the disease is a team effort

Such a lofty ambition requires partnerships within and outside of the Texas Medical Center (TMC), across the nation and around the globe. MD Anderson and other health care institutions must prepare for the “tidal wave” of cancer cases that World Health Organization (WHO) scientists say is approaching. Their prediction of 24 million cases a year by 2035 necessitates significant planning today.

“We’re all aging. The number of people who are going to get cancer and need cancer services in the next 20 years will be huge,”says Thomas Burke, M.D., executive vice president, MD Anderson Cancer Network®. “A single institution in a single location doesn’t have the financial resources or the reach that we could have if we were doing this with five, 10, 15 partners scattered around the country, all articulating the same agenda.”

To address this need and improve patient outcomes nationally, Burke is overseeing MD Anderson’s efforts to treat populations beyond Houston through the network. It’s divided into four member tiers — certified, associate, specialty and partner. A varying degree of expertise is shared at each level, from quality assurance based on MD Anderson’s approach to cancer care to co-branded oncology programs focused on a single disease site to full clinical integration. The network works with community hospitals and health systems, as well as Houston-area care centers and others, to elevate clinical care, share prevention and screening education, and launch clinical trials.

“We’d like to provide our services to a lot more people with cancer than we can in Houston,” Burke says. “It’s not possible without these kinds of relationships.”

To make this effort more efficient and effective, Burke has zeroed in on two areas of focus for the network: cohesion and trainee development.

Burke wants to engage patients and partners by uniting the network components into a more cohesive team and group of efforts.

“In the past, we built things as individual pieces,” he says. Those pieces included the LBJ Hospital Oncology Service, the Houston-area care centers, two large-scale partners in Arizona and New Jersey, and 12 certified-member hospitals and health systems in 10 states.

“But now we want a way to bring themes together that truly work as a network. To do that, we’d like to have clinical trial opportunities that cross over all of those sites. We’re putting together a team to identify the types of cancers that occur in those regions and develop clinical trials that match the needs of the patients who live there.”

By transferring developments made in the Texas Medical Center to somewhere such as the Phoenix area, where Banner MD Anderson Cancer Center is located, they become accessible to a local population of 5 million. This also can help the institution build a clinical trials operation that transcends both Houston and Phoenix, as well as bring value to the partner and its population.

“And it furthers MD Anderson’s mission of new discovery, new treatments and new ideas because we’d have access to a greater number of patients who can participate,” Burke says.

Banner MD Anderson opened in 2011, and another partner member, MD Anderson Cancer Center at Cooper in Camden, N.J., launched in 2013. Establishing subspecialties such as surgery, radiation and medical oncology at those sites laid a foundation with the ultimate goal of building sophisticated breast cancer, prostate cancer or lung cancer teams, similar to those found at the TMC campus.

According to Amy Hay, vice president for business development, the network wants to add four more partner members in the next eight years.

Burke says it only makes sense to partner with more hospitals in large geographic parts of the country. These partners will provide access to a larger and more diverse group of people who need care. Doing so will help advance some of MD Anderson’s most ambitious initiatives to eventually end cancer.

“If you think about discoveries that we expect to come out of our Moon Shots Program, you want to get those to the widest segment of the population as quickly as you can,” Burke explains. “Having these kinds of relationships really allows us to disseminate knowledge much more quickly than a single site in Houston.” 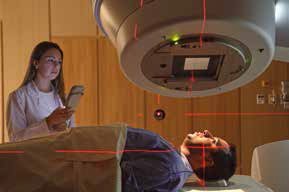 Presently, the most potential for dynamic growth is found at the certified level. These members are mostly located in midsize cities outside of Texas at cancer programs that share core values similar to
MD Anderson’s. Through the Physicians Network team, cancer programs at hospitals such as East Jefferson General Hospital in Metarie, La., are developed and built.

MD Anderson also helps these members track the outcomes of patients treated in their programs. The certified member provides the cancer practice professionals and facilities, and MD Anderson helps elevate the care.

But, according to Wong, as the certified group grows, the new members and those in development are “breaking the mold” of those from five years ago.

“They’re more mature cancer programs with highly developed physician leadership models leading integrated cancer programs in multi-hospital systems. In some cases, the volume of patients, physicians and clinical staff is five times the average historical values. The standard of cancer care is outstanding and the hospitals are affiliating with us to sustain and exceed that standard.”

So far, certified members have been largely concentrated in the eastern half of the U.S., among community hospitals. Wong says she expects that to change.

“It would be wonderful to further the national program with certified members in the western half of the U.S. This year we welcomed our first state university-based, academic member into the network,” Wong says.

With the WHO reporting that 60% of the world’s total new cancer cases each year occur in Africa, Asia and Central and South America, the benefit of building MD Anderson’s international presence also is evident. Currently, there are affiliates in Spain at MD Anderson Madrid and in Turkey at the MD Anderson Radiation Treatment Center at American Hospital in Istanbul, as well as 29 sister institutions that act as academic collaborators throughout the world.

This year, the network will launch its associate member level, specifically geared toward top-ranked oncology providers outside of the U.S. The program is designed to collaborate across prevention, clinical care, research and education, and will provide international health care providers the opportunity to have a more integrated relationship with MD Anderson.

“Over the years, collaborations with Albert Einstein Hospital in Sao Paulo, the first sister institution, have grown significantly,” Hay says. “Building on that alliance, Albert Einstein will this year become the first associate member.”

At the same time the network expands its reach, Burke recognizes the opportunity to recruit and support trainees who can extend MD Anderson’s model of multidisciplinary care across its affiliate practices.

In January, a senior baseball analyst for ESPN ranked the Houston Astros’farm system as the best in baseball. In the world of sports, a farm system provides training and experience for young players whose goal is to play in the major leagues.

“We train nurses. We train fellows. We train pharmacists. Some of whom we hire and they work here on the TMC campus. It would be great if you’re trained here, when you finish, you work here,” he says.

Those opportunities would include the East Coast or the Southwest, as well locations in the 10 states where certified members currently exist, and care centers around Houston. Based on what they want out of their work environment or geographic location, trainees have a lot of options within the network.

When reflecting on the WHO’s grim prediction of a 60% rise in cancer cases in the next 20 years, Burke points out the greatest needs going forward are preventive, primary care and cancer care. There’ll be no shortage of demand for health care professionals.

“We’re going to need everyone we train at some level. So we want to continue to train great people.”

Do you know Tom Burke?

Thomas Burke, M.D., was recruited to MD Anderson as an assistant professor in 1988. Before becoming executive vice president for the MD Anderson Cancer Network®, he was physician-in-chief from 2005 to 2013. Burke is a practicing gynecologic oncology surgeon with a research emphasis in vulvar and endometrial cancers. Burke spoke to Conquest about his life before Houston, his passions outside of work and his love of old movies. Just don’t ask him to sing. “I’m completely tone deaf and have absolutely no musical talent.”

Tell us about some of your stops before landing in Houston.

I grew up in suburban Chicago, but have spent most of my life in warm weather climates: New Orleans, Hawaii, San Antonio and Houston. Though there was a two-year stint at Fort Leavenworth, Kansas, that was mighty cold. I joined the U.S. Army to pay for my medical education, and stayed in for 10 years.

You did your clinical internship and residency at Tripler Army Medical Center in Honolulu. What’s one thing you could get in Hawaii that you wish you could get here?

I have many wonderful memories of Hawaii — it’s where I met and married my wife. A favorite of mine was the ability to make weekend hospital rounds at seven in the morning and be on a dive boat off the North Shore of Oahu by 9:30 a.m.!

There’s a life-size cutout of John Wayne outside your office. What’s your favorite film of his?

John Wayne is awesome in “Stagecoach.” I’m also partial to Humphrey Bogart, Ava Gardner and Marilyn Monroe. My wife, Cathy, loves old movies. We have a nice collection at our place outside of Fredericksburg.

It would surprise people you work with if they knew what about you?

I’m pretty transparent. Most of my work colleagues know me well. Not much would surprise them.

What do enjoy doing when you’re not working?

Like most of us, I enjoy not working (he says with a laugh). I have a nice patio garden with cacti, herbs and water lilies. Cathy and I are chronic Rockets fans. And we’ve done a fair amount of antique furniture refinishing.

The pain won’t stop, but it won’t stop her.
For some patients, the hurting never takes a break. MD Anderson doctors are now working on ways to tailor pain management to each person's disease and genetic makeup.
The drug that may make chemo a thing of the past
FDA-approved ibrutinib is helping chronic lymphocytic leukemia patients forget they have the disease
Understanding over-imaging
Convenience comes standard at Rotary House
Rotary House International celebrates 20 years of providing hospitality, support and accessibility to MD Anderson patients
The doctor will see you now…close to home