One drug attacks tumor cells directly; the other treats the immune system by taking the brakes off T cell response. Together, they put half of the patients with relapsed follicular lymphoma into complete remission in a phase II clinical trial at MD Anderson.

“Most drugs target only the tumor. This combination is complementary, treating both the lymphoma cells directly and the T cells in a manner that activates them against cancer cells,” said Sattva Neelapu, M.D., Ph.D., associate professor in Lymphoma/Myeloma at MD Anderson and senior author of the paper that appeared in The Lancet Oncology. 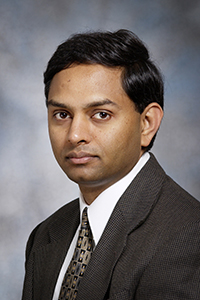 “The combination of the established antibody drug rituximab with the experimental drug pidilizumab so far also has a remarkably mild side-effect profile,” Neelapu said.

There were no grade 3 or 4 adverse events, with all effects at the less serious grade 1 and 2 levels. Patients had no indicators of autoimmunity, which can be an issue in the class of drugs that blocks immune system checkpoints and activate T cells. Such mild effects are particularly important for follicular lymphoma patients, who, on average, are
diagnosed with the disease at age 60.

By Will Fitzgerald
Blood test may one day reveal cancer