“Ellen Richie, my friend and colleague from graduate school, was having a lot of fun studying T cells,” he recalls. “She urged me to get into them, which recently had been discovered and were poorly understood.”

Richie, today a professor in Molecular Carcinogenesis at Smithville, is an expert on the development of T cells and the thymus — an organ right behind the sternum where these white blood cells mature.

“Somehow, something I said raised his interest in T cells, but I don’t recall specifics,” Richie says. “I’m really glad that it did, though, because he revolutionized the field.

“From his earliest days, he was always on the cutting edge,” she says. “He was never shy or put off by common wisdom or existing methods, challenging them when he found evidence to the contrary. He’s persistent — he definitely doesn’t give up.

“The big mystery of the time was the T cell antigen receptor. Nobody had any idea what it was,” Richie says. “The intellectual challenge that presented itself appealed to Jim.”

T cells seemed to function in a way that required them to recognize an antigen — a distinctive piece of a virus or bacterium, for example — to become activated and attack the invader. Research to identify a T cell antigen receptor had been so plagued by lack of conclusive proof that some scientists thought it might not exist at all, that T cells worked by some other mechanism.

Cancer and the Immune System 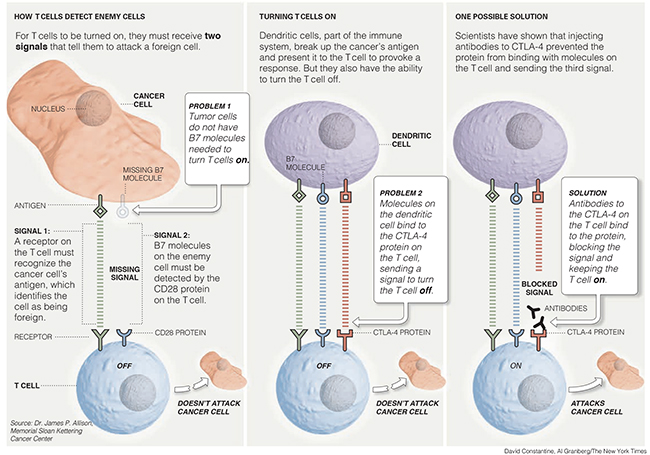 This graphic originally appeared in a 2005 New York Times article about cancer and the immune system that featured Allison and his research. Allison, who was at Memorial Sloan Kettering Cancer Center at the time, is credited as the source.

For years, scientists questioned how cancer evades destruction by the immune system. Allison’s research led to the targeting of a molecule found on T cells that shuts down immune response. He showed that blocking that off-switch, called CTLA-4, with an antibody unleashes an immune response against tumors.

Allison recalls a graduate-level immunology textbook that closed with some advice for budding immunology researchers: “Don’t try to find the T cell antigen receptor because it’s ruined more careers and wasted more time than any other single thing.

“So we tore that page out and stuck it to the wall in our lab because we figured we already had it, or at least an antibody to it.”

In a 1982 paper in the Journal of Immunology, Allison and colleagues identified an antibody that bound only to a specific type of lymphoma cell. Its specificity was a surprise — it didn’t connect with any other lymphoma cell line or with normal spleen, thymus, lymph node or bone marrow tissue.

Intrigued, they tapped their biochemistry expertise to determine the underlying protein structure on the lymphoma cell surface that held the antigen. Then they looked for similar proteins on the surfaces of other types of cells, finding them only on T cells and their precursor cells, but not on the better-known immune system B cells or in the bone marrow.

Their findings suggested that the protein complex made up a T cell-specific surface structure with both constant and variable regions, ideal for acting as the versatile, longsought T cell antigen receptor.

After publication, the young scientist was invited to a Gordon Conference on immunology, an elite meeting of the leading researchers in the field. A major paper in Cell soon confirmed what Allison’s team had suggested.

“The T cell antigen receptor is the ignition switch of the immune response,” Allison explains. But it wasn’t enough to fully ignite immunity by itself.

“Immunotherapy is the most exciting and promising area of cancer research today, and its potential is just beginning to be realized. We’re proud to have Jim leading our efforts to expand and hone this approach.”

More Stories From Conquest
Building a personalized approach to cancer therapy
In 2011, MD Anderson received a $150 million gift — the largest in its history — from the Khalifa Bin Zayed Al Nahyan Foundation.
The beginning of end tobacco
Tobacco use is one of the greatest public health menaces of our time, causing 30% of all cancer cases in the United States.
Get more out of conquest with the iPad app
Fibrous tissue believed to block therapy actually slows cancer's spread
The immuno man
James Allison is a blues-loving scientist from a small town in South Texas who shook off the immunotherapy naysayers and proved the human immune system could fight cancer.
First stop: Research park in Smithville
CD28: The gas pedal
CTLA-4: The brakes

By Katrina Burton
More to worry about than cancer
From patent to patients
Steven Frank is the doctor, inventor and entrepreneur who took the uncertainty out of a cancer treatment
Surgically removing cancer risk
For Denise Megarity, the decision to have her ovaries removed at a young age — and thereby dramatically reduce her risk of multiple cancers — was an empowering one
99 problems but cancer ain’t one
Megan Silianoff writes about the amazing ways her life has changed since her ovarian cancer diagnosis. She considers her illness a blessing. Without it, she’s not sure she would’ve found her true calling.
The adrenaline-fueled life
Reza Mehran, M.D., never stops challenging himself. Whether in the air, operating room or war zone, this surgeon is always up for a challenge. That’s just how he operates.
The ultimate cure for cancer
The American Cancer Society and MD Anderson have been allies in the cancer war for decades.