The ultimate cure for cancer

The American Cancer Society and MD Anderson have been allies in the cancer war for decades.

Given their shared commitment to understanding and eliminating cancer, it should come as no surprise that the partnership between MD Anderson and the American Cancer Society (ACS) has existed almost as long as the cancer center itself.

Shortly after opening in 1941, MD Anderson received its first research grant from ACS. In the almost 70 years since, it’s awarded the institution approximately 670 grants, equaling more than $80 million of support for its mission of eliminating cancer.
“In 2013, we celebrated our 100th birthday,” says John R. Seffrin, Ph.D., CEO of ACS. “If there’s one thing we’ve learned about defeating cancer during that time, it’s that an investment in cancer research has gone from a good bet to a sure bet. What that means is, if we continue to stoke the engines of discovery at institutions such as MD Anderson, we’re hopefully going to get the answers needed to end the unnecessary suffering caused by this disease.”
Prevention, Seffrin adds, is an area both ACS and MD Anderson view as crucial to achieving their shared goal.
“We have to work together to turn prevention into public policy,” Seffrin says. “More than half of the new cancer cases diagnosed each year could be prevented, and I think most people would prefer never to be diagnosed with cancer to being cured of it.”
ACS is working to enact prevention policies such as smoke-free laws; educating lawmakers about providing more access to quality, affordable health care that includes cancer screenings and treatment; and pushing for increased federal funding for cancer research.
Ernest Hawk, M.D., vice president and head of Cancer Prevention and Population Sciences at MD Anderson and co-leader of the cancer prevention and control platform of the Moon Shots Program, agrees with the need for changes in public policy.
“The momentum the American Cancer Society has generated with its multidisciplinary approach to fighting cancer matches our mission stride for stride,” Hawk says. “Our longtime partnership through research funding and prevention awareness continues to grow. We’re excited now to be working even more closely to develop new public policy that will accelerate our common goal of significantly reducing cancer deaths.”
In 2009, MD Anderson honored ACS for its decades of generous support with induction into The Anderson Assembly, an organization created to recognize donors who’ve made a lifetime commitment of $1 million or more to support MD Anderson programs. 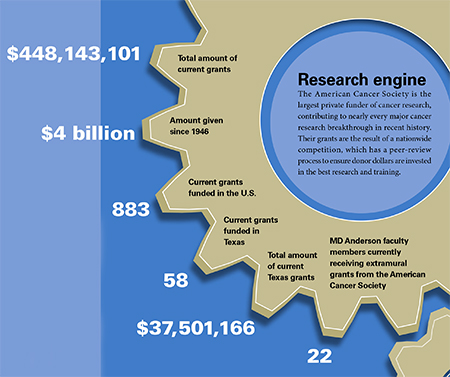 Many patients come to MD Anderson from outside of Houston, and about onethird travel from outside of Texas. To help those seeking treatment far from home, ACS has established Hope Lodges, which provide a free place to stay, in 31 cities. Currently, ACS seeks to raise $30 million to cover construction and operating costs for Hope Lodge Houston, which will be built in the Texas Medical Center on land donated by MD Anderson. Upon completion, it will be the largest Hope Lodge in the country, providing free accommodations and transportation for 62 patients and their caregivers. 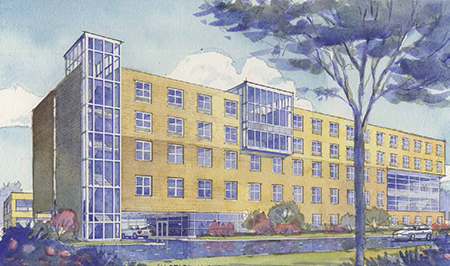 More Stories From Conquest
Building a personalized approach to cancer therapy
In 2011, MD Anderson received a $150 million gift — the largest in its history — from the Khalifa Bin Zayed Al Nahyan Foundation.
The beginning of end tobacco
Tobacco use is one of the greatest public health menaces of our time, causing 30% of all cancer cases in the United States.
Get more out of conquest with the iPad app
Fibrous tissue believed to block therapy actually slows cancer's spread
The immuno man
James Allison is a blues-loving scientist from a small town in South Texas who shook off the immunotherapy naysayers and proved the human immune system could fight cancer.
First stop: Research park in Smithville
The T cell ignition switch

By Katrina Burton
More to worry about than cancer
From patent to patients
Steven Frank is the doctor, inventor and entrepreneur who took the uncertainty out of a cancer treatment
Surgically removing cancer risk
For Denise Megarity, the decision to have her ovaries removed at a young age — and thereby dramatically reduce her risk of multiple cancers — was an empowering one
99 problems but cancer ain’t one
Megan Silianoff writes about the amazing ways her life has changed since her ovarian cancer diagnosis. She considers her illness a blessing. Without it, she’s not sure she would’ve found her true calling.
The adrenaline-fueled life
Reza Mehran, M.D., never stops challenging himself. Whether in the air, operating room or war zone, this surgeon is always up for a challenge. That’s just how he operates.