In 2011, MD Anderson received a $150 million gift — the largest in its history — from the Khalifa Bin Zayed Al Nahyan Foundation.

The 12-floor, 626,000-square-foot facility will be home to the Sheikh Khalifa Bin Zayed Al Nahyan Institute for Personalized Cancer Therapy, an international center of clinical excellence that uses the latest advances in genetic information to develop safer, more effective treatments for patients on a case-by-case basis.
That includes support for preclinical research and clinical trials in which each patient’s cancer cells are examined to determine their genetic and molecular mutations so that therapy can be tailored to their needs.
The building also will be the nerve center for the Sheikh Ahmed Bin Zayed Al Nahyan Center for Pancreatic Cancer Research. This will be dedicated to accelerating discoveries that significantly impact a deadly disease that’s on the rise yet remains underfunded compared to other cancers. Each year, some 43,000 cases of pancreatic cancer are diagnosed. Of those, 80-85% are inoperable.
“It’s a revolutionary time to be at MD Anderson if you’re a cancer researcher,” said Anirban Maitra, co-director and scientific director of the pancreatic research center. “It’s an incredible opportunity to build one of the best, most well-rounded pancreatic cancer groups in the country, bringing MD Anderson’s basic scientists, oncologists, surgeons, radiologists and pathologists all under a single umbrella.
“Integrated, multidisciplinary research and patient care will allow MD Anderson to become the vanguard place for pancreatic cancer treatment and research.”

What about the name on the building? 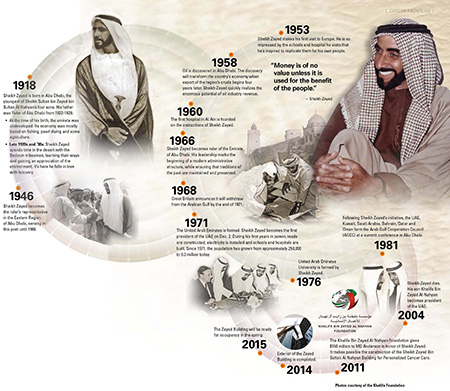 Follow this timeline through the life of Sheikh Zayed Bin Sultan Al Nahyan:

1946
Sheikh Zayed becomes the ruler’s representative in the Eastern Region of Abu Dhabi, serving in this post until 1966.

1953
Sheikh Zayed makes his first visit to Europe. He is so impressed by the schools and hospital he visits that he’s inspired to replicate them for his own people.

1960
The first hospital in Al Ain is founded on the instructions of Sheikh Zayed.

1966
Sheikh Zayed becomes ruler of the Emirate of Abu Dhabi. His leadership marks the beginning of a modern administrative structure, while ensuring that traditions of the past are maintained and preserved.

1968
Great Britain announces it will withdraw from the Arabian Gulf by the end of 1971.

1971
The United Arab Emirates is formed. Sheikh Zayed becomes the first president of the UAE on Dec. 2. During his first years in power, roads are constructed, electricity is installed and schools and hospitals are built. Since 1971, the population has grown from approximately 250,000 to 9.3 million today.

2014
Exterior of the Zayed Building is completed.

2015
The Zayed Building will be ready for occupancy in the spring.

Read about the latest progress in Making Cancer History® at Cancer Frontline.

More Stories From Conquest
The beginning of end tobacco
Tobacco use is one of the greatest public health menaces of our time, causing 30% of all cancer cases in the United States.
Get more out of conquest with the iPad app
Fibrous tissue believed to block therapy actually slows cancer's spread
The immuno man
James Allison is a blues-loving scientist from a small town in South Texas who shook off the immunotherapy naysayers and proved the human immune system could fight cancer.
First stop: Research park in Smithville
The T cell ignition switch

By Katrina Burton
More to worry about than cancer
From patent to patients
Steven Frank is the doctor, inventor and entrepreneur who took the uncertainty out of a cancer treatment
Surgically removing cancer risk
For Denise Megarity, the decision to have her ovaries removed at a young age — and thereby dramatically reduce her risk of multiple cancers — was an empowering one
99 problems but cancer ain’t one
Megan Silianoff writes about the amazing ways her life has changed since her ovarian cancer diagnosis. She considers her illness a blessing. Without it, she’s not sure she would’ve found her true calling.
The adrenaline-fueled life
Reza Mehran, M.D., never stops challenging himself. Whether in the air, operating room or war zone, this surgeon is always up for a challenge. That’s just how he operates.
The ultimate cure for cancer
The American Cancer Society and MD Anderson have been allies in the cancer war for decades.