99 problems but cancer ain’t one

Megan Silianoff writes about the amazing ways her life has changed since her ovarian cancer diagnosis. She considers her illness a blessing. Without it, she’s not sure she would’ve found her true calling.

I was a newlywed, a self-appointed Chicago socialite and an Urban Outfitters’ patron. I was working as a recruiter and harboring an obsession with Jay-Z. I was all of these things and 28 years old when I found out I had ovarian cancer. Looking back, the only thing more shocking than the blindsiding diagnosis was the fact I’d eventually be genuinely happy this happened to me. 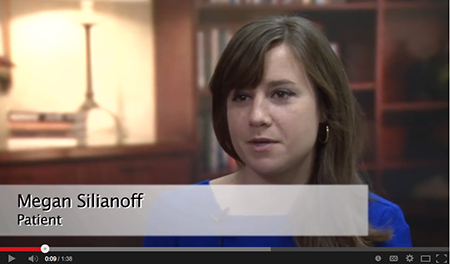 After several days of deferring to my mom to break the news to friends and family, and watching her sob through it every time, I realized I needed to take matters into my own hands. This whole thing was too scary. Too depressing. I wanted to lighten the mood and the message.

I decided to start a patient blog, which allowed me to control how and what people learned about my ongoing prognosis. I could also tell people about the cancer in my own voice; a voice that turned out to be quite irreverent and mildly profane.

My cancer prognosis initially was dire and confusing, consisting of opposing opinions from prestigious hospitals. Originally, I was told I had both breast and ovarian cancer and that chemo would be necessary. However, after seeking second and third opinions, it was determined I didn’t have breast cancer and didn’t need chemo. (I had serous, low malignant potential tumors, which tend to be unresponsive to chemo and radiation. That’s why I got to skip that hell on earth.) Although I had four surgeries in 17 months, I considered myself incredibly lucky.

Shortly into remission I realized I missed my blog. I didn’t miss the cancer aspect — but I did miss the writing. My patient blog allowed me to find my voice and writing style, and establish an audience that responded to what I had to say.

So, in January of 2011, I started “Greetings from Texas,” a lifestyle blog in which I explore and write about whatever it is I feel compelled. Whether it be my obsession with Kylie Jenner’s hair, a recipe for black-bean brownies, an outfit I want to show off or my sexual attraction to Harry Connick Jr.
Eventually, “Greetings” began to cultivate an audience outside of my friends and family. I began to work with brands and attend blogging conferences — at some of which I was a speaker. As my traffic grew, the blog even became mildly profitable.
In the process of building “Greetings” and pursuing domestic adoption with my husband of our daughter, I felt I had more in me than one-off posts. I wanted to share my experiences with cancer and adoption — somber subjects told in a light-hearted way, just like I’d done in my patient blog.
So I decided to write a book. After about a year and half of plugging away, I had my title: “99 Problems But a Baby Ain’t One — A Memoir About Cancer, Adoption, and My Love for Jay-Z.” It was published by Brown Books this past September.
These days, I continue to promote “99 Problems But a Baby Ain’t One.” I conducted a four-city book tour in 2013 and continue to do signings and speaking engagements at various blogging conferences.

I’ve presented my story to companies such as Facebook and the U.S. Navy, hoping to inspire them with my experiences. I’m also working on two new books: a children’s book and an adoption book, which I’m co-writing with an Atlanta author. 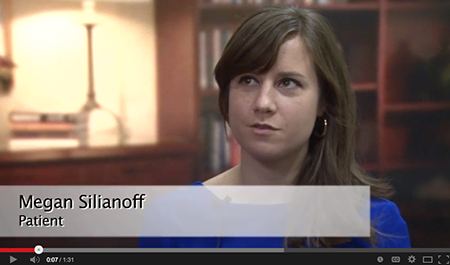 Every day I wake up I’m genuinely excited about my work. Whether it’s writing blog posts for “Greetings from Texas,” working on my books or writing freelance pieces for clients, I’m in love with what I do and my life — a life I never would’ve had without cancer.

Cancer is the best thing that ever happened to me. Without cancer my husband and I would never have adopted Macy, the crazy, whip-smart, Elmo-obsessed little girl who makes us laugh and experience love in a whole new way. Without cancer I never would have become a writer, a career that fulfills and energizes me every day. Without cancer I wouldn’t know how capable and strong I can be when push comes to shove.

I’ll say it again because I acknowledge it’s a provocative thing to declare, but I don’t want to be misunderstood.

Cancer is the best thing that ever happened to me.

Megan Silianoff is a writer from Chicago who started her well known blog, “Greetings from Texas,” after moving to Houston in 2011. Her ovarian cancer diagnosis paved the way for a successful writing career, which includes a published memoir and two more books in the works. In her spare time, she manages social media for Langford Market and Cheeky Vintage, two Houston boutiques. She also has been a contributor to MD Anderson’s Cancerwise blog. She and her husband, Danny, have been married for six years and have a 19-month-old daughter, Macy, and a 7-year-old Vizsla beagle mix named Booker.

Excerpts from “99 Problems But a Baby Ain’t One” 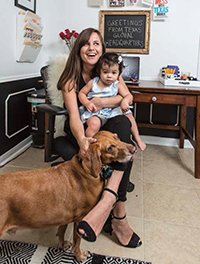 From “Greetings from Texas”:

From her patient blog:

More Stories From Conquest
Building a personalized approach to cancer therapy
In 2011, MD Anderson received a $150 million gift — the largest in its history — from the Khalifa Bin Zayed Al Nahyan Foundation.
The beginning of end tobacco
Tobacco use is one of the greatest public health menaces of our time, causing 30% of all cancer cases in the United States.
Get more out of conquest with the iPad app
Fibrous tissue believed to block therapy actually slows cancer's spread
The immuno man
James Allison is a blues-loving scientist from a small town in South Texas who shook off the immunotherapy naysayers and proved the human immune system could fight cancer.
First stop: Research park in Smithville
The T cell ignition switch

By Katrina Burton
More to worry about than cancer
From patent to patients
Steven Frank is the doctor, inventor and entrepreneur who took the uncertainty out of a cancer treatment
Surgically removing cancer risk
For Denise Megarity, the decision to have her ovaries removed at a young age — and thereby dramatically reduce her risk of multiple cancers — was an empowering one
The adrenaline-fueled life
Reza Mehran, M.D., never stops challenging himself. Whether in the air, operating room or war zone, this surgeon is always up for a challenge. That’s just how he operates.
The ultimate cure for cancer
The American Cancer Society and MD Anderson have been allies in the cancer war for decades.