Higher rates at every stage of the disease

Many research milestones have had an impact, including:

For this retrospective, single-institution study, Aman Buzdar, M.D., professor in MD Anderson’s Department of Breast Medical Oncology, and his team reviewed records of 56,864 breast cancer patients seen at the institution between 1944 and 2004.

Looking at five- and 10-year survival by stage (local, regional and distant, or metastatic), they found an impressive increase in survival in all three stages, as well as overall.

“Now we need to turn our attention to the refinement of breast cancer therapies, to further decrease risk of recurrence and death for our high-risk, early-stage breast cancer patients, and maintain disease control in those with metastatic disease.”

Reported in September 2010 in advance of the 2010 Breast Cancer Symposium. 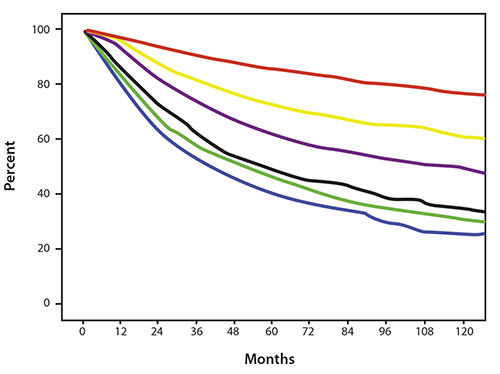 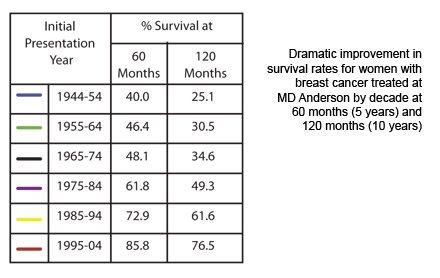 More Stories From Conquest
President will focus on his research passion
Also in the News
A vital sign gets close attention
Over the last quarter century, pulmonary medicine specialists at MD Anderson have helped to improve the quality of life for many cancer patients.
Exercise encouraged during all phases of cancer
Research helping to improve outcomes
Sleep Center and Lab offer relief
Rehabilitation services prescribe the right therapy
Nurses reach for excellence, innovation and safety
There are many definitions for excellence, but in nursing there is one measure that matters most: Magnet designation.
Congress hears, amplifies, channels the nursing voice
There’s the voice of an MD Anderson nurse, and then there is the voice of nursing at MD Anderson.
Paying attention leads to better practices
I*CARE builds the empathic side of oncology
Conveying bad news to a patient or a patient’s family is one of the most challenging aspects of being a medical doctor, particularly in oncology.
More emphasis on their care, cancer experience
Cancer prevention studies build knowledge
$50 million donation now $500 million endowment fund
Campaign to Transform Cancer Care continues