“I was asking what to expect, but Dr. (Michael) Keating told me not to worry about CLL. He said I should go back to Hawaii and enjoy my life to the fullest,” Alliata says. “And I have done more than that.”

Today, at age 55, Alliata is trim and ready for his next triathlon, including a world championship later this year. He and his wife, Dialta, have five children — two sets of twins in college and a 17-year-old daughter.

The Alliatas were living in Los Angeles when he was diagnosed with CLL in April 1999. He came to MD Anderson after learning that Michael Keating, M.D., was “the best in the world for treating CLL.”

When he met Keating, professor in the Department of Leukemia, Alliata was advised that he didn’t need therapy right away. Keating recommended careful monitoring, explaining that CLL usually progresses slowly and that a more effective combination of drugs was on the horizon.

CLL, the most common type of leukemia in the United States, is an often-silent disorder in which too many white blood cells are produced in the bone marrow and the body’s lymphatic system.

To live with magnificent sunsets

Before his diagnosis, Alliata and his family had vacationed in Hawaii. “We fell in love with the beautiful scenery, friendly people and great opportunities for a healthy lifestyle,” he explains.

In August 1999, they moved to a postcard-perfect area of Honolulu. 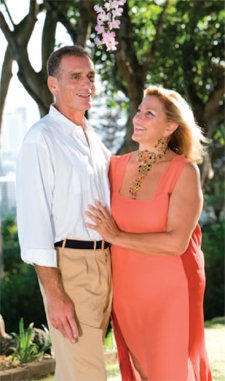 Vittorio Alliata with his wife, Princess Dialta,
who was a magazine director and filmmaker
when the two met.
Photo: Leah Ball at HI LUXURY magazine

“Where else can you see the magnificent sunsets 365 days a year?” he asks. By September 2001, Keating thought Alliata was ready for the three-drug chemotherapy FCR (fludarabine, cyclophosphamide and rituximab). The patient had his first treatment at MD Anderson, then the next five treatments in Honolulu.

“I had no problems during the treatments,” Alliata says. Even though he felt great, he was concerned about the future when he saw Keating in early 2002.

“He told me there probably were hundreds of things I could worry about that might kill me, but that list did not include CLL. Then he gave us a big bear hug,” Alliata remembers fondly.

By the time he celebrated his 50th birthday in 2006, Alliata had decided “approaching middle age wasn’t so bad, thanks to Dr. Keating … and I began seriously training for a triathlon.”

He placed first in his age group in three local competitions, and then qualified for a national championship last September in Alabama.

Alliata says the triathlons for his category include swimming 1,500 meters, biking 40 kilometers and running 10 kilometers. He recently qualified for a world championship in Beijing next September.

The couple met in Rome, where Alliata was born. “I thought Dialta, who was from Florence, was ravishing,” he confides.

Not only were they Italian, but they also were in similar professions. Alliata was publisher of a magazine and a film producer, while his future wife was a magazine director and also a filmmaker.

After marrying, they had five children in three years, confronted his CLL and decided to move to Hawaii to provide the best quality of life and education for everyone.

Their children are twin girls, Azzurra and Yana, 20; twins Fabrizio and Mirtilla, 19, and daughter Allia, 17. The four oldest attend college, and Allia is a high school senior.

All are fluent in multiple languages and have an encyclopedic knowledge of different cultures gained from visiting many parts of the world.

Over the years, summer travels have included sailing in the Mediterranean, exploring Pompeii, hiking on the volcano Stromboli while sailing in the Aeolian Islands, and seeing dozens of art exhibits, musicals and theatrical plays.

A frequent favorite trip involves returning to the Palazzo Cini, a museum in Venice founded by Alliata’s grandfather, Vittorio Cini, and containing a priceless art collection.

“I’m blessed with a wonderful wife and five extraordinary young adult children of whom we are very proud. Not a day goes by that I don’t thank Dr. Keating for helping me live my life to the fullest,” Alliata says.

More Stories From Conquest
President will focus on his research passion
Also in the News
Higher rates at every stage of the disease
A vital sign gets close attention
Over the last quarter century, pulmonary medicine specialists at MD Anderson have helped to improve the quality of life for many cancer patients.
Exercise encouraged during all phases of cancer
Research helping to improve outcomes
Sleep Center and Lab offer relief
Rehabilitation services prescribe the right therapy
Nurses reach for excellence, innovation and safety
There are many definitions for excellence, but in nursing there is one measure that matters most: Magnet designation.
Congress hears, amplifies, channels the nursing voice
There’s the voice of an MD Anderson nurse, and then there is the voice of nursing at MD Anderson.
Paying attention leads to better practices
I*CARE builds the empathic side of oncology
Conveying bad news to a patient or a patient’s family is one of the most challenging aspects of being a medical doctor, particularly in oncology.
More emphasis on their care, cancer experience
Cancer prevention studies build knowledge
$50 million donation now $500 million endowment fund
Campaign to Transform Cancer Care continues