Top
Previous Article
Next Article
Spring 2011 : Also in the News

James Yao, Ph.D., continues to study the effectiveness of everolimus on its own and in combination with other drugs. Photo: Wyatt McSpadden

“Because treatment options available to patients with pancreatic neuroendocrine tumors are so limited, and the data in terms of the size of the treatment effect is so clear, I believe this research will have immediate clinical applications,” says James Yao, M.D., associate professor in MD Anderson’s Department of Gastrointestinal Medical Oncology.

An international team of investigators has discovered that the interplay among a major tumor-suppressing gene, truncated chromosomes and two sets of microRNA provides a molecular basis for explaining the less aggressive form of chronic lymphocytic leukemia.

“Our findings could reveal new mechanisms of resistance to chemotherapy among leukemia patients. This feedback mechanism could help us differentiate between patients with poor or good prognoses,” says George Calin, M.D., Ph.D., associate professor in MD Anderson’s Department of Experimental Therapeutics and co-director of the Center for RNA Interference and Noncoding RNAs.

Reported in the Jan. 4, 2011, edition of The Journal of the American Medical Association.

Newly diagnosed patients with acute myeloid leukemia and myelodysplastic syndrome who have an additional disease or lack good performance status traditionally have been ineligible for clinical trials and often for standard therapies.

Now, a two-drug combination — 5-azacitidine and vorinostat — is safe and active in these patients.

“Our findings suggest current eligibility standards that prevent participation by these patients in Phase I and Phase II clinical trials might be inadequate,” says Guillermo Garcia-Manero, M.D., professor in MD Anderson’s Department of Leukemia.

Reported in December 2010 at the 52nd American Society of Hematology Annual Meeting.

A vaccine that turns the immune system against certain brain tumor cells improved patients’ survival in a Phase II clinical trial. All these patients carried a genetic mutation that drives the most aggressive form of glioblastoma multiforme.

“The next step for the vaccine is a large Phase III clinical trial, which is in the planning stages.”

Reported in the Oct. 5, 2010, edition of the Journal of Clinical Oncology. 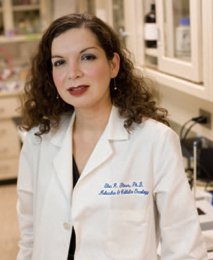 To understand how a family of genes works as
a whole, Elsa Flores, Ph.D., and her colleagues
are studying p53 and p63.
Photo: Wyatt McSpadden

Long overshadowed by p53, its famous tumor-suppressing sibling, the p63 gene does the tougher, important job of stifling the spread of cancer to other organs in mice models.

Not only does a specific form of p63 protein block metastasis, but it also does so by activating the enzyme Dicer, which plays a pivotal role in the creation of microRNAs, tiny bits of RNA that regulate a host of cellular processes.

These findings have now been extended to human cancers, including metastatic mammary and lung adenocarcinomas and head and neck squamous cell carcinomas.

“p63 is a master metastasis regulator, an important role in its own right, but before now, no one understood how Dicer was regulated,” says senior author Elsa Flores, Ph.D., associate professor in
MD Anderson’s Department of Cellular and Molecular Oncology, who led the basic science study using mice models.

An antibody loaded with an anti-cancer agent — brentuximab vedotin (SGN-35) — produced complete or partial remissions in 38% of patients with relapsed or therapy-resistant Hodgkin’s lymphoma.

“That level of objective responses to a drug is impressive for a Phase I trial,” says study lead author Anas Younes, M.D., professor in MD Anderson’s Department of Lymphoma/Myeloma.

“There hasn’t been a new drug considered for Hodgkin’s lymphoma in 30 years. These encouraging results are being confirmed in a large Phase II trial.”

Reported in the Nov. 4, 2010, edition of The New England Journal of Medicine.

To folate or not to folate

Folate’s effect on cancer, once thought to be mainly preventive, has become less clear in recent years, with scientists finding cancer-promoting aspects of folate intake in colorectal, prostate and other cancers.

This discovery has created concern about a naturally occurring B-vitamin found in leafy vegetables, fruits, dried beans and peas.

Under order from the U.S. Food and Drug Administration, its synthetic version, folic acid, has been added to:

It is also taken as a recommended dietary supplement.

Reported by Jean-Pierre Issa, M.D., professor in MD Anderson’s Department of Leukemia, in the December 2010 issue of Cancer Prevention Research.

More Stories From Conquest
President will focus on his research passion
Higher rates at every stage of the disease
A vital sign gets close attention
Over the last quarter century, pulmonary medicine specialists at MD Anderson have helped to improve the quality of life for many cancer patients.
Exercise encouraged during all phases of cancer
Research helping to improve outcomes
Sleep Center and Lab offer relief
Rehabilitation services prescribe the right therapy
Nurses reach for excellence, innovation and safety
There are many definitions for excellence, but in nursing there is one measure that matters most: Magnet designation.
Congress hears, amplifies, channels the nursing voice
There’s the voice of an MD Anderson nurse, and then there is the voice of nursing at MD Anderson.
Paying attention leads to better practices
I*CARE builds the empathic side of oncology
Conveying bad news to a patient or a patient’s family is one of the most challenging aspects of being a medical doctor, particularly in oncology.
More emphasis on their care, cancer experience
Cancer prevention studies build knowledge
$50 million donation now $500 million endowment fund
Campaign to Transform Cancer Care continues