There are many definitions for excellence, but in nursing there is one measure that matters most: Magnet designation.

BY Julie A. Penne

Note: This is the second of a three-part series on nursing. The third part will appear in the summer issue of Conquest.

One of only 378 hospitals worldwide awarded the recognition, MD Anderson has earned the designation from the American Nurses Credentialing Centers three consecutive times.

In fact, with its first designation earned in 2001, the institution is one of the original 50 charter hospitals receiving the Magnet seal.

Magnet designation is one of the many components used by U.S. News & World Report in its annual survey of “Best Hospitals,” in which MD Anderson has been the number one cancer center for the last four years. Less than 7% of U.S. hospitals are Magnet-recognized, according to the American Hospital Association.

In addition to the statement it makes about the institution’s quality of patient care, Magnet also communicates to all levels of nurses who work outside of MD Anderson that the institution values its nurses and the contributions they make. 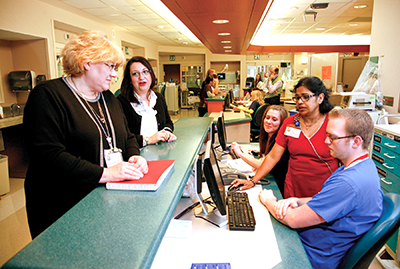 “With each designation renewal, every four years, the bar gets higher, and we’re challenged to show progress, innovation, impact and new goals,” she says. “Our Magnet designation is a great point of pride, but our nursing community never takes it for granted. We treasure it and pursue it because it’s so tough.”

When the Magnet announcement was made, the surveyors cited the Good Catch Program for its impact on patient safety and the Nursing Practice Congress for its open outreach to all nurses to take hold of their practices.

For Barbara Summers, Ph.D., vice president and chief nursing officer the past seven years, the definition of nursing excellence is exceptional practice, transparent and effective governance and empowered nurses at the bedside.

“Individual nurses and the nursing community as a whole are demonstrating and returning, in very tangible ways, the extraordinary investment that MD Anderson has made in nursing education, empowerment, leadership and research programs,” Summers says.

“Our nurses have had the power and the autonomy at the bedside all along, but now our community is truly showing its value to the institution, as well as the entire profession.”

“We make Magnet recognition a major goal. This designation recognizes our extraordinary community of nurses, their commitment to their profession and those they care for.”

More Stories From Conquest
President will focus on his research passion
Also in the News
Higher rates at every stage of the disease
A vital sign gets close attention
Over the last quarter century, pulmonary medicine specialists at MD Anderson have helped to improve the quality of life for many cancer patients.
Exercise encouraged during all phases of cancer
Research helping to improve outcomes
Sleep Center and Lab offer relief
Rehabilitation services prescribe the right therapy
Congress hears, amplifies, channels the nursing voice
There’s the voice of an MD Anderson nurse, and then there is the voice of nursing at MD Anderson.
Paying attention leads to better practices
I*CARE builds the empathic side of oncology
Conveying bad news to a patient or a patient’s family is one of the most challenging aspects of being a medical doctor, particularly in oncology.
More emphasis on their care, cancer experience
Cancer prevention studies build knowledge
$50 million donation now $500 million endowment fund
Campaign to Transform Cancer Care continues