Related story: Patients of all ages

First, they provided radiation. Then, they added chemotherapy and laboratory services, surgery and rehabilitation therapy. Now, MD Anderson’s regional care centers are allowing patients to enroll in clinical trials that offer hope and could change how certain diseases are treated in the future. All of this conveniently located where patients live and work.

In November 2010, MD Anderson’s regional care centers in The Woodlands, Katy, Sugar Land and the Bay Area enrolled their first patients in one of the nine clinical trials available to community patients at the time.

By the end of Fiscal Year 2011, 48 patients had been enrolled on research protocols in the regional care centers. This number rose to nearly 180 by the end of FY2012. By the end of FY2013, the centers are on track to have 200 patients participating in one of 19 open studies, bringing the total to nearly 375 patients since the program’s inception.

The rapid rate of accruals is due, primarily, to increased collaboration between regional care center physicians, who are eager to offer trials to their eligible patients, and TMC primary investigators, who seek to fill their trials and collect significant data.

The growing number of patients who qualify to participate in a trial in a community setting prompted MD Anderson’s Clinical Research Support Center to devote full-time research coordinators to The Woodlands and Sugar Land locations earlier this year, with a goal of adding research coordinators in the Bay Area and Katy as well.

Erica Adlakha, research coordinator in The Woodlands, spends much of her day scanning patient records to identify suitable candidates for available trials.

“We’re accruing patients to trials very quickly,” Adlakha says. “When I find eligible patients, I speak with their physicians. Once the physicians ask the patients if they’re interested, I meet with them to further explain the protocol and answer any questions they might have.

“Most patients want to participate,” she adds. “They know they might be helping themselves and someone in the future. Likewise, the physicians are eager to participate in the research.”

Benjamin Smith, M.D., assistant professor in MD Anderson’s Department of Radiation Oncology, echoes the sentiment that the regional care centers are eager to enroll patients in protocols. Smith is principal investigator on a trial, with the goal of including 288 patients. As of press time, 206 patients have been enrolled, largely due to participation from the centers.

“My trial is asking a question that’s very relevant to community-based patients with less complicated breast cancers,” Smith says. “We’re looking at two different courses of radiation following a lumpectomy. More than half of the patients have been accrued through the regional care centers. We’re working closely together to further establish a collaborative research infrastructure.”

The collaborative research is further supported by a clinical research committee and working group that engages and encourages principal investigators from the TMC to open their trials to community-based patients. Sunil Patel, M.D., assistant professor at MD Anderson’s center in Katy, participates on the committee.

“We work to ensure that there aren’t any logistical issues that might make it difficult for a community patient to participate in a particular protocol,” Patel says. “Our goal is to open as many studies as we can, help our colleagues accrue to their trials and, ultimately, answer these important research questions faster and help patients sooner. We have a steady interest from regional patients, who inquire about trials and want to participate in them.”

Matthew Ballo, M.D., professor in the Department of Radiation Oncology and based in the Bay Area center, opened a trial in 2011 that is almost full. While only a handful of regional care center physicians are principal investigators on their own trials, Ballo expects that to change, given the heavy interest in research among MD Anderson’s community-based physicians.

“As regional care center physicians, we share a career path with our TMC colleagues that includes the research component of MD Anderson’s mission,” he says. “We can offer a larger number of patients in the greater Houston area access to trials with clinical implications, overseen by people who strongly support the institution’s research objectives — and offer hope to patients.” 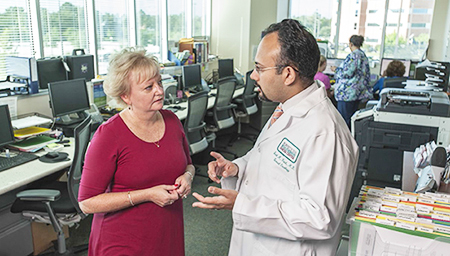 By Joey Tran
Advancements in fertility preservation
Tha-thump, tha-thump goes the pacemaker heart
Taking on rare soft tissue, bone tumors in the pelvis
Cancer prevention as a way of life
An impressive faculty of cancer prevention clinicians and epidemiologists, behavioral scientists and health disparities researchers continue to dissect and investigate methods of prevention to reduce the number of people who develop cancer.
New approaches help smokers quit
One approach doesn't fit everyone when it comes to quitting smoking, but researchers and physicians are beginning to understand addiction and find ways to help smokers kick the habit.
The School of Health Professions: Hands-on wins hands-down
Through the School of Health Professions and the Graduate School of Biomedical Sciences, a collaboration with The University of Texas Health Science Center at Houston, MD Anderson is investing in a future of strong scientific discovery and excellence in health care.
A dose of music therapy shifts the mood
Alma Faz: The race of her life
Audio: Conquest summer 2013