Through the School of Health Professions and the Graduate School of Biomedical Sciences, a collaboration with The University of Texas Health Science Center at Houston, MD Anderson is investing in a future of strong scientific discovery and excellence in health care.

Reza Marvdashti, Ph.D., wanted practical experience for his genetics students at San Jacinto College (SJC), and he had an idea. First, he took the unusual step of using his sabbatical to enroll in MD Anderson’s School of Health Professions in 2009-2010, studying cytogenetics.

Second, he talked to the school’s administration about a collaborative program with his students, one that would allow them to have hands-on experience with well-established faculty.

The results of his efforts have been rewarding for him, the school and his students. Not only did he pass the national American Society of Clinical Pathologists’ Board of Certification for Technologist in Cytogenetics, but he also helped start a program that has been giving his students the experience he hoped for.

Each fall for the past four years, SJC students have spent two days a week for six weeks at the school. The program has been so successful that MD Anderson is now preparing a National Institutes of Health “Bridges to the Baccalaureate Program” grant to be submitted in October 2013. It will include SJC, as well as students in the genetics program at Houston Community College Northwest and in the biotechnology program at Lone Star Community College-Montgomery.

“What we’re hoping for from this grant is to have summer internships to feed students from colleges into our cytogenetics and other programs,” says Vicki Hopwood, assistant professor and director of the SHP’s Cytogenetic Technology Program. 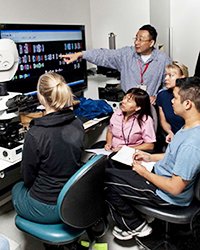 To illustrate what is being done when they submit the grant, SHP has three interns from Lone Star for eight weeks this summer.

“The biggest barrier for students entering our programs is that they need to work and have families to care for,” says Shirley Richmond, Ph.D., professor and dean of SHP, who will lead the grant if it is secured. “When they come, it makes it hard to continue working. Having grants to provide internships and scholarships removes that financial barrier.”

Another avenue opens for the school this August. In addition to the nine undergraduate programs already offered, a master of science in diagnostic genetics is being added as the first graduate-level program.

“Our two-year master of science program addresses the growing need for a graduate level program that combines a strong diagnostic genetics curriculum with a vigorous clinical environment,” says Peter Hu, Ph.D., program director for the master’s degree in diagnostic genetics. “The program is tailored to people seeking a career in this cutting-edge field of clinical laboratory sciences.”

The program concentrates on the mastery of interpretive skills in major areas of the field, including:

Graduate School of Biomedical Sciences: The man who discovered the 'two-hit' theory

Not everyone’s desk is brought from obscurity to a place of honor. 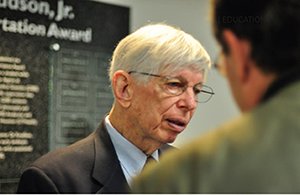 But on March 5, the Graduate School of Biomedical Sciences (GSBS) dedicated both the Art Deco desk used by former dean, Alfred G. Knudson Jr., M.D., Ph.D., and a plaque containing the names of all recipients of the outstanding dissertation award established in his honor.

A geneticist and physician, Knudson, now in his 90s, was recruited to MD Anderson as dean of the school in 1969 by the institution’s first full-time president, R. Lee Clark, M.D. At that time, the school was housed in the Hermann Professional Building. His job was to merge the graduate school, then under the administration of MD Anderson, with the basic science faculty at The University of Texas Medical School at Houston, which had just been established.

“If Dr. Clark wanted something to happen, it did,” Knudson says.

“MD Anderson was a place that didn’t know failure or impossibility. The melding of the two organizations went smoothly and with excitement on everyone’s part.”

Knudson served as dean from 1970 to 1976, making a lasting mark on the school and its educational philosophy.

He is internationally recognized for his “two-hit hypothesis” of cancer causation, which explained the relationship between the hereditary and non-hereditary forms of a cancer and predicted the existence of tumor-suppressor genes that can prevent cancer cell growth. This now-confirmed theory has advanced understanding of errors in the genetic program that turn normal cells into cancer cells.

The Knudson Award was initiated in 1997 by MD Anderson’s faculty to note a distinguished scientist and educator whose early landmark contributions to the field of genetics are made while associated with MD Anderson and the GSBS.

By Joey Tran
Advancements in fertility preservation
Tha-thump, tha-thump goes the pacemaker heart
Taking on rare soft tissue, bone tumors in the pelvis
Regional centers expand cancer care options
Cancer prevention as a way of life
An impressive faculty of cancer prevention clinicians and epidemiologists, behavioral scientists and health disparities researchers continue to dissect and investigate methods of prevention to reduce the number of people who develop cancer.
New approaches help smokers quit
One approach doesn't fit everyone when it comes to quitting smoking, but researchers and physicians are beginning to understand addiction and find ways to help smokers kick the habit.
A dose of music therapy shifts the mood
Alma Faz: The race of her life
Audio: Conquest summer 2013