With its ability to target tumors precisely while minimizing damage to healthy tissue, proton therapy has rapidly gained a foothold as an option for radiation treatment in the past decade. And MD Anderson has gone a step beyond. The institution is the only center in North America to treat patients with one of the most advanced forms of proton therapy, called intensity modulated proton therapy with multi-field optimization (IMPT).

How it works: IMPT relies on complex treatment planning systems and an intricate number of magnets to aim a narrow proton beam and essentially “paint” a radiation dose layer by layer.

Diseases treated: IMPT is best used to deliver a potent and precise dose of protons to tumors embedded in the nooks and crannies of the head and neck or skull base, including nasal and sinus cavities; oral cavity; salivary gland, tongue, tonsils and larynx.

“In the era of personalized medicine, IMPT is a type of radiation so sophisticated that we can adjust it to a patient’s specific tumor with unique precision,” says Steven Frank, M.D., associate professor in the Department of Radiation Oncology. “It’s especially well-suited for patients with complicated tumors nestled in the head and neck region where you want to retain key functions, such as vision, speech, swallowing and taste.”

The patient: Musician keeps it moving

Harry Sheppard remembers exactly when he fell in love with music. 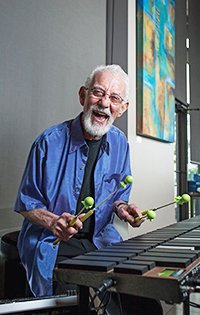 “I was 4 years old, banging on pots and pans. Finally, my mother said to my dad, ‘Get him some drums. He’s ruining all my pots!’” Sheppard says. “At 7, I had my first lesson as a drummer. Years later, I switched to the vibraphone.”

That banging was just the start of an illustrious career as a jazz musician, drumming for greats like Billie Holiday, Benny Goodman and Barbara Streisand. At 85 years young, Sheppard still plays around Houston almost every night of the week. Not even a cancer diagnosis could slow down his career.

It was surgery for a carotid artery that led to the discovery of an “ugly” lymph node, which doctors feared was malignant. The origin: cancer of the base of the tongue.

A fellow cancer survivor and restaurateur, where Sheppard has played every Wednesday night for the past 12 years, suggested he be treated at MD Anderson.

At his first meeting with radiation oncologist, Steven Frank, M.D., to discuss the possibility of receiving proton therapy, Sheppard told his physician he was unsure of treating his cancer, in part, because of his age Dr. Frank’s response: “You are too young to talk like that!”

Sheppard “breezed” through six weeks of intensity modulated proton therapy with manageable side effects, keeping up with most of his music gigs during treatment. And he has no plans of slowing down.

“I can still play circles around 20-year-olds,” Sheppard says. “I just keep doing it and moving straight ahead.”

By Joey Tran
Advancements in fertility preservation
Tha-thump, tha-thump goes the pacemaker heart
Taking on rare soft tissue, bone tumors in the pelvis
Regional centers expand cancer care options
Cancer prevention as a way of life
An impressive faculty of cancer prevention clinicians and epidemiologists, behavioral scientists and health disparities researchers continue to dissect and investigate methods of prevention to reduce the number of people who develop cancer.
New approaches help smokers quit
One approach doesn't fit everyone when it comes to quitting smoking, but researchers and physicians are beginning to understand addiction and find ways to help smokers kick the habit.
The School of Health Professions: Hands-on wins hands-down
Through the School of Health Professions and the Graduate School of Biomedical Sciences, a collaboration with The University of Texas Health Science Center at Houston, MD Anderson is investing in a future of strong scientific discovery and excellence in health care.
A dose of music therapy shifts the mood
Alma Faz: The race of her life
Audio: Conquest summer 2013