Getting the drop on lung cancer

When caught early, lung cancer can be cured; however, it almost always goes undetected till it’s too late. Researchers are working on a blood test that will reveal the disease in the early stages.

Sam Hanash has made it his mission to find a way to detect lung cancer in its earliest stage, when it’s still curable. Photo: Eric Kayne

As a young doctor, Sam Hanash had the difficult duty of delivering bad news to patients with late-stage cancer.

“I had to look them in the eyes,” he says, “and tell them they had only months to live.”

Patients and family members were understandably stunned, Hanash recalls. Often, they would tearfully ask why the disease wasn’t caught sooner.

“I told them certain cancers grow silently in the body and don’t produce symptoms until the disease has reached an advanced stage,” he says. “By then, the prognosis has worsened.”

Believing medicine had failed his patients, Hanash, M.D., Ph.D., professor of Clinical Cancer Prevention, resolved to find a way to detect cancer in its earliest stage, when the disease is still curable. His first target? Lung cancer, the No. 1 cause of cancer deaths because of its absence of early-stage symptoms.

“Instead of offering patients bad news,” he says, “I wanted to offer them a chance for a cure.”

Today, he’s leading a study that, when completed, is hoped to result in a simple, noninvasive blood test that can detect early-stage lung cancer.

“This test, when it’s available, will be practice-changing,” Hanash says.

The project is part of MD Anderson’s Moon Shots Program, a bold plan to quickly improve survival rates for many of the deadliest cancers, including lung cancer.

A stealthy disease that can lurk in the body years before symptoms arise, lung cancer almost always goes undetected until it reaches an advanced — and usually incurable — stage. By the time patients show typical warning signs such as persistent coughing, shortness of breath and chest pain, the disease has already spread beyond the lungs, vastly diminishing the chance for a cure.

National Cancer Institute statistics show that only 16% of lung cancer patients survive beyond five years after diagnosis — simply because their cancer is detected too late.

“Of every 10 people found to have lung cancer,” Bevers says, “nine are, unfortunately, inoperable.”

But the news isn’t all bad. The outlook for lung cancer patients is improving as scientists create new ways to detect the disease earlier.

Lung cancer can be cured, but it has to be detected early, while the tumor is still small and confined to the lung where it developed, Bevers says.

“So it makes sense for high-risk patients, like current and former smokers, to undergo periodic screenings at regular intervals to catch cancer before it spreads,” she explains.

What if the key to fighting lung cancer could be found in a drop of blood?
Watch the video that explores the potential of MD Anderson’s lung cancer screening trial: 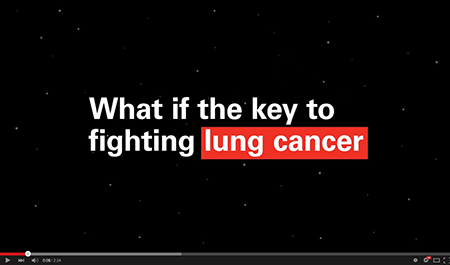 Click on the image to watch a full video

Using low-dose CT to detect lung cancer is new and still catching on, says Hanash, who also is the director of the Red and Charline McCombs Institute for the Early Detection and Treatment of Cancer.

Less than 8% of primary care physicians are referring their high-risk patients for scans, though Hanash expects that number to increase over time.

Still, the technology has serious downsides, including a high rate of false positives.

“Only four percent of patients with abnormal scans in the National Lung Screening Trial were actually found to have lung cancer,” says Hanash. “This means that 96 percent were false positives.”

Suspicious spots often turn out to be noncancerous calcium buildups in lung tissue, scars from previous respiratory infections, and other such harmless nicks, cuts and dings.

Yet every abnormal scan must be taken seriously. Patients with suspicious scans typically undergo a series of follow-up CT scans over two years to detect any growth or change in the troublesome spot, which would point to possible cancer. Some undergo more invasive lung biopsies. In this procedure, doctors remove a small sample of lung tissue with a needle or surgical tool and examine it under a microscope. The procedure can lead to problems such as a collapsed lung, bleeding into the lung or infection.

“False positives put healthy people at risk of complications — and even death — following unneeded biopsies, not to mention the tremendous psychological distress of being told they tested positive for lung cancer,” says Hanash. “We don’t want to send healthy people for unnecessary biopsies.”

And low-dose ct has another downside. if used too often, it can expose patients to too much radiation, which increases their risk of developing cancer.

“But the cumulative radiation, even though it’s low-dose and much less than that of a standard chest CT, can still take a toll,” Hanash warns.

To circumvent these issues, Hanash and colleagues are developing a blood test to detect lung cancer earlier.

“Wouldn’t it be great to have a blood test as our first line of defense?” Hanash asks. “If the blood test signals possible cancer, then, and only then, would patients be sent for further testing.”

The test will hunt for tumor markers — microscopic telltale proteins or other molecules produced by the  body in response to cancer, or by the cancer itself. These markers are released into the patient’s bloodstream in very small amounts, and can be measured with sensitive tests to signal the presence of cancer. Some markers are specific to one cancer, while others are seen in several types of cancer.

Scientists at MD Anderson and beyond have already identified some lung cancer tumor markers. Hanash himself has discovered several. Blood tests designed to detect these previously identified tumor markers are already in use, including one in the United Kingdom and a couple in the United States. But the tests have limited accuracy, have only been tested in a small number of people and are not yet approved by the Food and Drug Administration.

Hanash says we can do better. He wants to bump researchers’ collective efforts up a notch by developing the most accurate and sensitive lung cancer blood test to date.

The first order of business, he says, is to enroll a massive group of current and former long-time smokers, monitor them over time to see who develops cancer, and then pinpoint the tumor markers that occur most frequently in the study participants diagnosed with cancer.

“These are the ‘winning’ tumor markers,” Hanash says, “because they’re most effective at predicting lung cancer. We’ll use them to formulate a better test.”

The test will be sensitive enough to determine if patients have small cell or the more common non-small cell lung cancer, as well as show whether their cancer is in remission or progressing. Someday, Hanash envisions, people may take the test at home using a drop of blood from a finger prick.

Hanash and his colleagues are in the very early stages of launching an expansive international trial in which blood from up to 30,000 heavy smokers will be collected and analyzed at multiple sites throughout the world.

The undertaking, kickstarted with a $10 million grant from the Lyda Hill Foundation, will be massive and unprecedented, he says. The trial will enlist MD Anderson experts from many disciplines, including diagnostic radiology, thoracic surgery, pulmonary medicine, epidemiology and pathology.

“We’ll evaluate dozens of biomarkers in thousands of patients throughout the world,” says Ziding Feng, Ph.D., the study’s leading statistician. “When we finish, we’ll have the information needed to create a highly accurate and comprehensive test that can save lives.”

The initial study will be conducted in conjunction with low-dose CT screening. Ultimately, Hanash foresees the blood test predicting the need for CT scans. If the blood test shows no cancer, then no CT scan would be needed.

“But we’re not there yet,” he says. “Our trial is still in its early stages. We have to crawl before we walk, and walk before we run.”

Study participants visit the center to have their blood drawn and undergo low-dose CT scans once a year for three years to check for lung nodules.

“Our CT scanners are equipped with special software that improves the image quality, which helps us glean as much detailed information as possible,” says Jeremy Erasmus, M.D., professor of Diagnostic Radiology and principal investigator for the MD Anderson study site. “We pay close attention to each nodule’s shape and texture, which may significantly improve our ability to discern whether it’s malignant.”

Additional study sites will soon launch throughout the U.S., China and Europe, says Hanash, who is principal investigator of the overall trial.

“Our intent is to have at least a dozen sites in the U.S. and additional sites in other countries.”

Lung cancer takes the lives of 158,000 Americans a year, making it the leading cause of cancer deaths by far. Lung cancer causes more deaths than breast, prostate, colon, liver and bladder cancers combined.

Hanash says blood tests hold great promise for outwitting the disease. But he says people should also know that quitting tobacco is the key to progress.

Though sometimes caused by familial predisposition, breathing heavily polluted air for long periods of time or exposure to second-hand smoke, asbestos or radon gas, the majority of lung cancer cases are linked to tobacco use.

“Half the people who are regular smokers will die of lung cancer or other smoking-related diseases,” Hanash says. “The answer is obvious: Don’t smoke.”

54% Localized Stage: Only 15% of lung cancers are diagnosed at a localized stage (the cancer is confined to the lungs)

27% Regional Stage: 22% of lung cancers are diagnosed at the regional stage (the cancer has spread to regional lymph nodes)

4% Distant Stage: More than half (57%) of lung cancers are diagnosed at a distant stage (the cancer has spread)

17% Average rate for all stages

By Laura Sussman
Continuing education
Addison Marshall, 22, is on the fast track to success. He’s a student at Texas A&M University carrying a full course load while studying to become a physician assistant. He works at a physical therapy clinic in College Station and teaches a 6 a.m. fitness and conditioning class at a local gym.
The warrior pose
The Little Yogis Program at the Children’s Cancer Hospital provides young patients tools to cope with the pain, anxiety and fear they may face as they undergo treatment.
Living a long life starts early
MD Anderson will lend its cancer prevention expertise to the Coordinated Approach to Child Health (CATCH) program, which is used in schools and after-school programs across the nation. Initial efforts will focus on preventing skin cancer and tobacco use.
The unstoppable Meisha Brown
While being treated at MD Anderson as a child, Meisha Brown was inspired to pursue a career in medical research. Today, she’s a cancer advocate and pursuing her Ph.D.
Colorectal cancer doesn’t care how old you are
According to researchers at MD Anderson, in the next 15 years, more than one in 10 colon cancers and nearly one in four rectal cancers will be diagnosed in patients younger than the traditional screening age.
MD Anderson puts the lab in collaborations
In the modern world of biomedical research, collaboration between academic institutions and pharmaceutical companies is becoming more and more prevalent, necessary and productive.
Suite Relief
Many patients who travel to MD Anderson from outside the Houston area for treatment face the difficult task of finding an affordable place to stay. Several nonprofit groups have been established to help.
Cooperating with Cooper to make great care even better
Eighteen years after completing his surgical oncology fellowship at MD Anderson, Francis Spitz, M.D., is back with the institution — but not in Houston.
Lessons we can learn from a teacher's cancer experience

Lessons we can learn from a teacher's cancer experience