While being treated at MD Anderson as a child, Meisha Brown was inspired to pursue a career in medical research. Today, she’s a cancer advocate and pursuing her Ph.D.

How a young patient metamorphosed into a tireless cancer advocate

Jameisha “Meisha” brown was just 8 years old in June 1998 when she heard her mother talking to the doctor in hushed tones.

At an age when she should’ve been thinking about how to dress her favorite doll, young Meisha’s world was about to turn upside down.

“I knew it was bad,” Brown says. “I heard him mention that he wanted to order an emergency CT scan.”

That day, Brown began a journey that would take her from cancer patient to survivor to advocate. When she was diagnosed with Burkitt’s lymphoma, an aggressive, fast-growing type of B cell non-Hodgkin lymphoma that occurs most often in children and young adults, it was another sad twist in a young life that had already witnessed more than its share of challenges.

“I was raised in what could be considered a disadvantaged family,” she says. “At the time of my diagnosis, my mother was a single mom raising five kids. She was also taking care of my grandmother, who had a stroke 10 years earlier.”

She smiles slightly as she thinks back to the house where she grew up.

“When it rained outside, it rained inside. I was always looking for plastic to cover things with,” she recalls.

And then, just weeks after she had finished the second grade, she received the cancer diagnosis. While playing outside that summer, she began to experience stomach pain and nausea and became more and more fatigued. At the pediatrician’s office, Brown heard the doctor telling her mother she needed to decide which hospital to take her to. That same day she went to MD Anderson, and three days later, she underwent emergency surgery to remove tumors around her small intestine, colon, ovaries and appendix.

Over the next few months, Brown received chemotherapy and endured severe gastrointestinal problems that made a feeding tube necessary. Still, she had some lighter moments during her treatment. Kids are still kids she says, even when they have cancer. 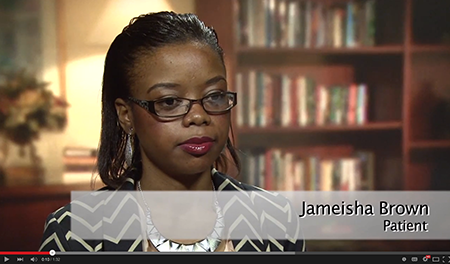 Click on the image to watch a full video about Burkitt’s lymphoma survivor reflects on her childhood treatment.

“We played hard, even in the hospital. I always encouraged the other pediatric patients to ‘live for today.’ We would go skating down the hallway with our IV poles and generally made life difficult for some of our physicians,” she says.

Following three months of standard-of-care treatment, Brown wasn’t better. She was placed in a clinical trial and given a drug regimen of rituximab, cyclophosphamide, hydroxydaunorubicin, oncovin and prednisone. In the end,  it proved to be the right decision, and Brown sees herself as living proof of clinical research’s power to help patients.

“The doctors weren’t saying, ‘we can expect this,’ or ‘this has been proven with that,’” she recalls. “With this treatment they were saying, ‘we hope.’ It gave me a sense that I had a fighting chance because there was the word ‘hope.’”

During her time in the hospital, Brown continued her schoolwork through the Pediatric Education and Creative Arts Program. While participating in the MD Anderson Children’s Art Project, she did a painting of a butterfly symbolizing her metamorphosis from cancer patient to survivor. The butterfly was later made into a glass ornament that was sold through the program. 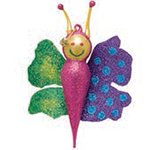 Although Brown was cancer-free by February 1999, she continued participating in the Children’s Art Project until age 19. She also worked through the long-term side effects of the many surgeries and treatments, and is still followed by an interdisciplinary team of cancer specialists.

Today, Brown’s life is still focused on health. She received her master’s degree in health studies from Texas Woman’s University — just blocks from where she was a young patient at MD Anderson. She’ll pursue a Ph.D. in health education, studying chronic disease and health dispairites research at Texas A&M University. She hopes one day to be an MD Anderson scientist working with other cancer patients who come from disadvantaged backgrounds.

“My hope is to work on making health care, particularly for cancer, even more accessible and available to everyone,” says the energetic and upbeat Brown.

For someone in her early 20s — she’s 24 — Meisha Brown already is earning a reputation as a cancer advocate. She was recently featured in a special video on cancer patients in the American Association of Cancer Research’s (AACR) Annual Progress Report, which was released on Capitol Hill in September at the Rally for Medical Research. In 2014, she also received the AACR’s Cancer Advocate Award and MD Anderson’s Legacy Award.

This past October, she made the Society for Public Health Education’s ‘30 Under 30’ list, which highlights health educators under age 30 for their contributions to the promotion and improvement of community health. Brown designs cancer education curriculums for early detection programs serving medically underserved communities in Houston. She’s an associate member of AACR and participates in the association’s Women in Cancer Research and Minorities in Cancer Research special interest groups.

From a house where it rained indoors to her fight with Burkitt’s lymphoma to her studies in the halls of higher education, Brown’s journey continues. The butterfly, it seems, is still transforming. 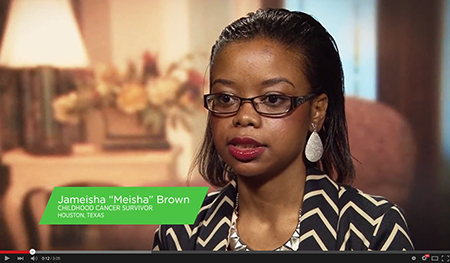 Click on the image to watch a full video about Inspired to Help End Cancer Health Disparities.

“My hope is to work on making health care, particularly for cancer, even more accessible and available to everyone.”

By Laura Sussman
Continuing education
Addison Marshall, 22, is on the fast track to success. He’s a student at Texas A&M University carrying a full course load while studying to become a physician assistant. He works at a physical therapy clinic in College Station and teaches a 6 a.m. fitness and conditioning class at a local gym.
The warrior pose
The Little Yogis Program at the Children’s Cancer Hospital provides young patients tools to cope with the pain, anxiety and fear they may face as they undergo treatment.
Living a long life starts early
MD Anderson will lend its cancer prevention expertise to the Coordinated Approach to Child Health (CATCH) program, which is used in schools and after-school programs across the nation. Initial efforts will focus on preventing skin cancer and tobacco use.
Colorectal cancer doesn’t care how old you are
According to researchers at MD Anderson, in the next 15 years, more than one in 10 colon cancers and nearly one in four rectal cancers will be diagnosed in patients younger than the traditional screening age.
Getting the drop on lung cancer
When caught early, lung cancer can be cured; however, it almost always goes undetected till it’s too late. Researchers are working on a blood test that will reveal the disease in the early stages.
MD Anderson puts the lab in collaborations
In the modern world of biomedical research, collaboration between academic institutions and pharmaceutical companies is becoming more and more prevalent, necessary and productive.
Suite Relief
Many patients who travel to MD Anderson from outside the Houston area for treatment face the difficult task of finding an affordable place to stay. Several nonprofit groups have been established to help.
Cooperating with Cooper to make great care even better
Eighteen years after completing his surgical oncology fellowship at MD Anderson, Francis Spitz, M.D., is back with the institution — but not in Houston.
Lessons we can learn from a teacher's cancer experience

Lessons we can learn from a teacher's cancer experience