MD Anderson’s Breast Medical Oncology Department recently announced news of two significant recruitments, starting at the top with Debasish Tripathy, M.D., an enthusiastic new chair with an optimistic view of his department’s role in improving care and expanding treatment options for breast cancer patients. Another addition made headlines in late July when it was revealed that V. Craig Jordan, Ph.D., the developer of several cancer-fighting drugs, would join the institution this fall.

Jordan is best known for his key role in transforming a once-failed contraceptive medication into a valuable breast cancer treatment that has saved many lives. The drug, later named tamoxifen, originally was created to prevent pregnancy by blocking estrogen. Jordan developed the strategy of long-term adjuvant tamoxifen therapy, in which breast cancer patients take tamoxifen after their primary treatment to lower the risk of recurrence. He also described and deciphered the properties of a new group of medicines called selective estrogen receptor modulators (SERMs). Jordan was the first to discover the preventive abilities of tamoxifen and the drug raloxifene, which are now approved by the Food and Drug Administration to reduce breast cancer incidence in high-risk women.

Tripathy comes from the Norris Comprehensive Cancer Center at the University of Southern California. The New Orleans native recently spoke about his future vision for breast cancer care and research at MD Anderson, and more. 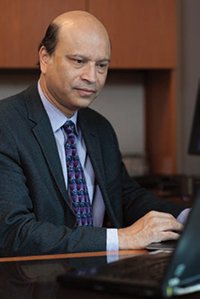 Tell us a little about your work.

I’m interested in understanding why breast cancer cells become resistant to drugs that initially work. Overcoming resistance could make many of our drugs much more effective for a longer period of time, or more able to cure advanced breast cancer, which is a goal we have yet to attain. My research has focused on resistance mechanisms to available drugs that block the function of a growth-promoting gene called HER2. We’ve discovered certain proteins that may cause resistance, and we’re testing strategies to reverse their actions in the hopes it can prolong remissions or even lead to cures in patients with advanced HER2-positive breast cancer, which account for about a fifth of all breast cancers.

What drew you to MD Anderson?

MD Anderson’s rare combination of history, scientific excellence and unparalleled scope has made it the leading cancer research and care institution. We all want to make the largest impact we can in the lives of those with cancer. I feel that I can best do that here.

What’s your vision for Breast Medical Oncology? Where do you see the department heading under your leadership?

I would like to move toward a more patient-centered approach to breast cancer care and research. This approach reflects our growing understanding that the genomics and genetics of each person results in a unique type of cancer for which we need to personalize therapy. This is an amazing time of technological and biological advances, making breast cancer a more survivable disease. We’re also in the midst of changes in health care delivery that aim to make the fruits of progress available as broadly as possible. We want to make sure that our services are available to those in Houston and the surrounding area, but that our impact continues to be worldwide.

What are some of the most exciting recent advancements in the field?

MD Anderson has been a leader in the identification of altered genes that drive cancer growth and other characteristics. This can now be addressed by an array of drugs that are more focused and, therefore, have fewer side effects. This year we witnessed a boom in new biologically targeted cancer drug approvals and we expect that trend to continue due to sustained research efforts. We have newer tools at our disposal to address fundamentally new scientific theories as to why some cancers may be difficult to eradicate. I believe that the coming years will be a triumph for “team science,” where research groups collaborate to use population-based information and detailed testing on genes and proteins of each tumor to develop new personalized cancer therapies and diagnostic tests.

By La Chanda Ricks
Making imaging more accessible to West Houston
MD Anderson Diagnostic Imaging Center in West Houston is now open, bringing cancer care services closer to home for residents of West Houston and the surrounding area.
Reaping the benefits of gardening
Forgetting cancer on a night to remember
The annual Camp AOK prom, which is held each August as part of a weeklong summer camp for “Anderson’s Older Kids,” gives cancer patients and their siblings a chance to dress up and get down.
The cancer prevention vaccine
Close to 80 million people in America currently are infected with the human papillomavirus, more commonly known as HPV. MD Anderson doctors are working to stop HPV-related diseases by increasing awareness and accessibility to what some call the cancer prevention vaccine.
Serving the underserved
MD Anderson is taking care to where the cancer burden is heaviest
Tracking the trajectory
Since being announced in 2012, the Moon Shots Program has launched new approaches in surgery, targeted therapies, drug combinations and more. Get up to speed on the progress in accelerating the end of cancer.
Ovarian and breast cancer

By Scott Merville
Beating lymphoma into remission with a one-two punch
Grounded by disease, a pilot flies again with the help of an immunotherapy drug combo
Big data = Big gains for cancer research
They’re scientists. They’re miners. They dig deep through seemingly endless streams of numbers and terabytes of data to discover hidden gems of understanding about how and why cancer forms.
Braving a surgical no man’s land
The Skull Base Tumor Program is an all-pro team of surgeons and specialists tackling tumors in very hard-to-reach places.
The Giver
Seasoned volunteer Ervin Grice is so good at giving that they asked him to teach others the right way to do it
Taking care of the nurses
Meet four winners of the Arceneaux Award, MD Anderson’s highest nursing honor