Taking care of the nurses

When Debbie Houston came to MD Anderson in the late 1960s, cancer care was in its infancy. Back then, there were cigarette dispensers scattered throughout the Texas Medical Center campus and chemo treatment meant spending many weeks in the hospital.

Nursing was a natural career choice for Houston. Her mother, who’s now 100, was a nurse for 50 years. Houston initially came to MD Anderson because it offered the most competitive salary to part-time nursing students. However, she stayed for more than four decades after she quickly realized making a difference in the lives of cancer patients was the biggest payoff of all.

“I worked with patients with lung and esophageal cancers as a clinical nurse specialist,” she says. “Getting to know them and their families was my favorite part.”

Her compassion for patients and dedication to oncology nursing earned Houston the inaugural Ethel Fleming Arceneaux Outstanding Nurse-Oncologist Award, first given in 1982.

Established by The Brown Foundation Inc. and named for a director of nursing who died of pancreatic cancer, the annual award is the institution’s highest nursing honor. A committee representing MD Anderson’s clinical faculty, patient care administration and nursing staff reviews nominations from peers and patients before selecting a recipient for the honor, which comes with a $15,000 prize.

Arceneaux Award winners vary in ages, ethnicities and nursing specialties, but they have several things in common: a deep love for their patients, a passion for the nursing profession and a profound sense of humility.

“It was a shock and very humbling because I worked with so many deserving nurses, so I felt the pressure to prove my worth,” Houston says. “It inspired me to improve my practice, get involved in oncology nursing organizations and be the best I could be because I was carrying the mantle of this award.”

Former winner is now the chair

Wenonah Ecung joined MD Anderson as a general oncology nurse in 1979 and has risen through the ranks, now serving as vice president for Clinical Administration. Along the way, she completed her master’s degree and officially became a Ph.D. candidate. She’s due to conduct her public defense at the end of this month. Ecung has overseen multiple departments and became chair of the Arceneaux Award selection committee — a role she still holds today.

“It’s a pretty cool responsibility having been a recipient,” says Ecung, who won the award in 1990. “It’s reassuring to know we’re passing the baton to worthy people who really are here to carry on the values of the Arceneaux Award.”

Planning for the June award ceremony begins each fall. Once nominations are finalized, Ecung redacts all identifying information, including gender, area of employment and name of nominator.

“Anything that can create bias in the equation is removed,” she explains. “The committee works blindly for a period of time, and I don’t vote unless there’s a tie.”

Once the committee narrows it down to three finalists, everyone gathers for “speed Arceneaux,” where nominees talk to committee members over lunch, switching tables every fifteen minutes until all have met.

Winning the Arceneaux Award was an honor and a privilege for Ecung. “It was tremendous recognition for a job I love doing, for people I love serving,” she says.

Colleen Villamin was feeling the pressure of wearing many hats just before being nominated for the Arceneaux Award last year. Balancing motherhood with school and a full-time workload proved too much, so she put school on hold and began working part time. Winning the Arceneaux Award motivated her to complete her nursing education and return to the bedside.

“When I received this honor, I felt a huge obligation to fill the shoes of the nursing giants that walked before me,” says Villamin, who worked in the Stem Cell Transplant unit at the time. “I decided to go back to school to complete the Clinical Nurse Leader program and then went back to work full time.”

Since then, Villamin says doors have opened to her that she never thought possible. She’s become a principal investigator of a nursing division study, and Advance for Nurses magazine invited her to write a standing feature, which she titled “Guarding the Profession.”

“I picked that name because one of the roles of Clinical Nurse Leader is to do just that,” she explains. “A lot of the brightest nurses become nurse practitioners, so it’s up to Clinical Nurse Leaders to remain at the hospital and make sure nursing at the bedside is the best it can be.”

Villamin, who now serves in the Thoracic and Cardiovascular Surgery unit, wears her Arceneaux pin with pride. She says patients ask her about it regularly.

“I tell them it’s from people who donated money to recognize outstanding oncology nurses,” she says. “We’re very fortunate that they’ve been able to honor it and keep it going for so many years.”

As seen on TV

At age 10, Diane Barber, Ph.D., knew she would become a nurse someday. It was the late ’60s, and Barber, living in southern Mississippi, religiously watched “Julia,” a television series featuring Diahann Carroll in the titular leading role as an African-American nurse.

“It was the most awesome thing at that time. I didn’t have any family in the health care field,” Barber says. “Julia was such a great role model. I watched her and told my grandmother, ‘That’s what I’m going to do when I grow up.’”

Now a nurse at MD Anderson for more than 16 years, Barber takes care of patients on phase I clinical trials. She says her patients’ courage, spirit and hope motivate her daily.

“I can’t get over how our patients leave their homes and support systems to participate in a phase I program with no guarantee they’ll benefit from it,” she says. “It’s amazing. I think, ‘if they can do this, I can go the extra mile for them.’”

Marrying young to a military officer who traveled the globe, Barber picked up a nursing degree along the way, enrolling in courses from Hawaii to Pennsylvania. Most recently, she obtained her Ph.D., a lifelong goal that she says ties with winning the Arceneaux Award as the proudest accomplishments of her career.

Barber, who currently teaches part time, plans to become a full-time nursing instructor when she eventually retires from bedside nursing.

“I want to teach the next generation of nurses,” she says. “They soak up everything you say. And it’s rewarding to see the students get so excited.”

And the Arceneaux went to …

The award carries a prize of $15,000, which the winners have put to very good use over the years. 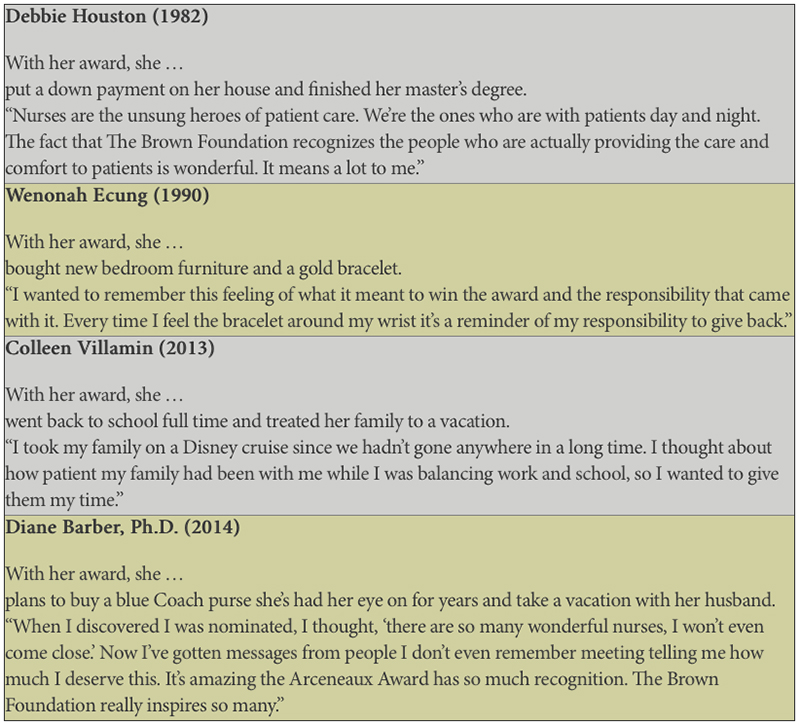 By La Chanda Ricks
Making imaging more accessible to West Houston
MD Anderson Diagnostic Imaging Center in West Houston is now open, bringing cancer care services closer to home for residents of West Houston and the surrounding area.
Reaping the benefits of gardening
Forgetting cancer on a night to remember
The annual Camp AOK prom, which is held each August as part of a weeklong summer camp for “Anderson’s Older Kids,” gives cancer patients and their siblings a chance to dress up and get down.
The cancer prevention vaccine
Close to 80 million people in America currently are infected with the human papillomavirus, more commonly known as HPV. MD Anderson doctors are working to stop HPV-related diseases by increasing awareness and accessibility to what some call the cancer prevention vaccine.
Serving the underserved
MD Anderson is taking care to where the cancer burden is heaviest
Tracking the trajectory
Since being announced in 2012, the Moon Shots Program has launched new approaches in surgery, targeted therapies, drug combinations and more. Get up to speed on the progress in accelerating the end of cancer.
Ovarian and breast cancer

By Scott Merville
Beating lymphoma into remission with a one-two punch
Grounded by disease, a pilot flies again with the help of an immunotherapy drug combo
Big data = Big gains for cancer research
They’re scientists. They’re miners. They dig deep through seemingly endless streams of numbers and terabytes of data to discover hidden gems of understanding about how and why cancer forms.
Braving a surgical no man’s land
The Skull Base Tumor Program is an all-pro team of surgeons and specialists tackling tumors in very hard-to-reach places.
The Giver
Seasoned volunteer Ervin Grice is so good at giving that they asked him to teach others the right way to do it