MD Anderson's team packs up to head back to Houston after a November 2009 workshop in Japan. Photos: Haruo Ogawa

In 2000, Naoto Ueno, M.D., Ph.D., traveled to Japan to talk about Herceptin for breast cancer patients. But he also listened. To patients, investigators, scientists, surgeons.

What struck him repeatedly was the Japanese approach to cancer drug development, treatment and patient care. While he had received his medical degree in Japan, he’d never practiced medicine there, never experienced its hierarchical nature or its traditions. Though he had a deep respect for them, he also knew how beneficial MD Anderson’s multidisciplinary care was for patients and health care professionals.

“Could Japan benefit from this approach?” he asked himself. “Would it translate into another culture?”

“I didn’t know how we could teach it,” says Ueno, professor in MD Anderson’s departments of Breast Medical Oncology and Stem Cell Transplantation and Cellular Therapy. “I just knew that MD Anderson faculty did a good job of it. For us, it’s normal. I wasn’t even sure how to define it.”

But he decided to try.

The biggest challenge was to be culturally sensitive, honoring Japanese pride in their more paternalistic style of leadership while introducing a different way of thinking.

The other challenge was defining “multidisciplinary” and how to translate it. “Multidisciplinary is hard to pronounce in Japanese,” Ueno says. “But the word ‘team’ is easy, and ‘oncology’ has become a rather well-known term. Team Oncology sounded good in Japanese so we decided to call this the Japan Team Oncology Program, or JTOP.”

And that helped with the definition that began to take shape: cancer care delivered by representatives of a variety of health care professions and functions working in concert. At MD Anderson, not only do surgical, radiation and medical oncologists work together to provide patient care, but also mid-level providers like advanced practice nurses, pharmacists and others are encouraged to expand their roles and take part in decision-making processes. 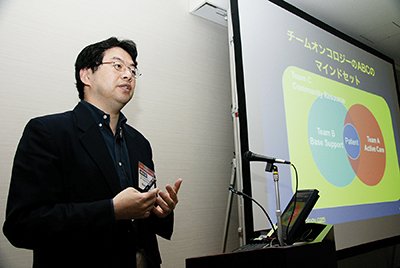 Naoto Ueno, M.D., Ph.D., has shown how the power of one man's vision can galvanize a team of health care
professionals and inspire a nation to re-evaluate its approach to cancer care.


Over the last 10 years Ueno’s efforts, and those of the team he inspires, have evolved from a virtual presentation to 1,000 members of the Japanese Society of Clinical Oncology in 2001, into three-day educational workshops each autumn since 2002, as well as training programs at MD Anderson each spring since 2003. More recently, a website — explaining the institution’s multidisciplinary concept in Japanese — receives 70,000 hits a month.

To date, JTOP has trained more than 420 Japanese health care professionals, many of whom are in leadership positions promoting multidisciplinary care in different oncology centers in Japan. And 49 of those trained at MD Anderson provide similar workshops in their medical communities.

“Our greatest, collective accomplishment, however,” Ueno says with great pride, “was our influence on the Japanese Diet’s passage of the Cancer Act, similar to the one President Nixon signed in 1971. Initiated in spring 2007, it includes professional funding for promoting multidisciplinary cancer care in Japan and for oncology professional development in 18 regional areas of the country.”

A cohesive team of experts

Intent on ensuring the program is stable and ongoing, Ueno has masterfully galvanized a team of experts to help it grow. The dedicated MD Anderson team comprises surgical, radiation and medical oncologists, clinical statisticians, nurses and pharmacists.

In 2002, he recruited, among others, Richard Theriault, D.O., professor in the Department of Breast Medical Oncology, who is a member of JTOP’s newly established Management Executive Committee.

“I went for the first workshop, and it was a phenomenal event,” Theriault says. “Although it was no surprise, we were quick to see that in Japan the system is dramatically different. Multidisciplinary care, as we understand it, is a team of health care professionals working together for the common good of the patient. Things aren’t quite that open in Japan.

“But these workshops set out to explain what multidisciplinary care is, how it’s practiced at MD Anderson, what training nurses and pharmacists receive and how they do their jobs.”

Each year, after general presentations, the 60 participants split into groups of 15 with five surgeons, five nurses and five pharmacists in each. Then, they are given the task of developing a clinical trial.

“It’s very intense,” Theriault says. “A physician helps lead each team while a biostatistician roams from group to group, and the three professions work together to design a clinical trial and prepare to present it to the other participants the next morning.”

Directly after those presentations, Ueno, Theriault and the other MD Anderson experts discuss each attendee as they choose six people — two physicians, two nurses, two pharmacists — who will travel to MD Anderson for a five-week training course the following spring. They weigh criteria such as the person’s resume, participation in the presentation and level of English.

"The majority of cancer patients in Japan are not seen by oncologists, but rather by surgeons specialized in a certain type of surgery, be it breast, thoracic, gastrointestinal. It's the surgeon who takes care of the patient through chemotherapy, radiation and any other type of therapy. Only recently are there two programs that offer oncology training and certification."

Cultural sensitivity a must

Nurses and pharmacists have played an equally important role in the development of the program, taking part in the fall workshops and the spring visits.

Having worked closely with Joyce Neumann on clinical cases and knowing of her interest in professional nursing in Japan, Ueno invited her to join them at the fall conference in 2002.

An advanced practice nurse and program director in the Department of Stem Cell Transplantation and Cellular Therapy, Neumann’s interest in Japan was kindled in 2001 when she lectured at a meeting on stem cell transplantation. During that stay, she visited several hospitals and felt she’d stepped back in time when she saw nurses still wearing white uniforms and caps, and taking a much less assertive role in patient care.

“I’m an advanced practice nurse (APN) who functions much like a nurse practitioner,” she says. “While they have the APN role as clinical nurse specialists in Japan, they do not have the combined medical nursing model that goes beyond the traditional nursing role. They were shocked when I first spoke about expanded roles.”

Neumann emphasizes that when the MD Anderson team (including the nursing team) gives presentations in Japan, they continue to stress that what they are discussing is one example of multidisciplinary care.

The expanded nursing role in Japan will mean a major shift in how the professional nurse is educated and viewed by other professionals, their patients and caregivers. This will mean further empowering the nurse and breaking some traditions that include gender, pay and hierarchy.

“Our model of multidisciplinary care might not be the right model for Japan, but the nurses are very interested in exploring a different professional model,” she says. “I talk about changes our culture has gone through that have helped shape this expanded role for nurses in the United States.”

Barry Feig, M.D., professor, Department of Surgical Oncology, has been instrumental in developing the Japan TeamOncology Program, bringing his expertise in gastrointestinal and breast cancer surgeries. The Chinese character he holds — Wa — means “harmony” and “team work,” qualities he brings to the program.

‘Leading from where you are’

In 2006, Ueno realized the importance of leadership skills that make a multidisciplinary approach possible. So he brought in Janis Apted, associate vice president for Faculty Development.

“I found that a lot of the participants are young and not yet leaders, so I talked about ‘leading from wherever you are in the institution,’” Apted says. “Leadership, I tell them, is a set of behaviors, not a position.”

Ueno then asked her to take those ideas to the larger workshop group in Japan that autumn. Since then, Apted’s presentation on leadership and communication is an integral part of the annual content and has led to the establishment of an Academy of Cancer Experts, founded to focus entirely on leadership.

“I focus on interpersonal skills, influencing others, communication, role playing, career development planning, their goals and how to get there,” Apted says. “They’re hungry to learn, and they take away ideas on how to keep growing and learning.”

The introduction of this model caused its own shift in the workshops.

“Three or four years ago, we adjusted the focus to help participants be more successful in multidisciplinary care through three areas: leadership, communication and evidence-based medicine,” Ueno says.

Hillary Prescott, Pharm.D., in MD Anderson’s Department of Pharmacy Clinical Programs, became part of JTOP in time for the 2007 November symposium in Japan. She is also a member of the newly established Management Executive Committee.

“I am grateful that I was offered this unique opportunity to join the team,” she says. “We’re encouraged to rely on our own expertise. And while we work independently from our own perspectives, we take a team approach as we prepare.

“The other members,” she says of Ueno, Theriault and the MD Anderson team, “are incredible leaders. Everyone has a different expertise and leadership style. It helps me better develop myself as a leader.”

In Japan, she found that until recently physicians only dealt with other physicians. The JTOP model shows how much nurses and pharmacists can take leadership roles. “In fact, the whole program shows that it takes a skilled team with a strong vision to make change,” she says.

Ueno’s vision and his ability to infuse others with his enthusiasm have brought JTOP to its 10th anniversary with strong financial backing from unrestricted grants provided by Chugai Pharmaceutical Co., Roche and, since 2007, Novartis Pharma Oncology. Before 2005, Pfizer Oncology was a partial supporter. Sister institutions in the development are St. Luke’s Life Science Foundation and St. Luke International Hospital in Tokyo.

In addition, an advisory board and the Management Executive Committee have taken form, passing leadership and decision making to a larger, dedicated group. Beginning in 2010, the Tokyo Oncology Consortium-MD Anderson Cancer Center Sister Institution agreement supports this program through the Oncology Education Promotion Foundation in Tokyo.

“Naoto Ueno has impacted cancer care in Japan and inspired a whole team at MD Anderson that participates with no fanfare and works very hard,” Apted says. “We love this project and working with him. It’s no small achievement. He has what I call leadership magic — magic with people — and he’s brilliant in knowing how to get things done through groups of people.”

By Mary Jane Schier
Also in the News