Rafael Pantoja had all but lost hope.

The thyroid cancer he had battled for 14 years was back and spreading.Then, earlier this year, he began taking lenvatinib, a drug that was tested at MD Anderson and approved by the Food and Drug Administration (FDA) in February. Lenvatinib treats patients such as Pantoja, whose thyroid cancer doesn’t respond to the more traditional radioactive iodine therapy. It uses targeted radiation to destroy any thyroid tissue or cancer cells that remain after the thyroid is surgically removed.“At this point in my treatment, lenvatinib was my only option,” says Pantoja, a father of six and certified public accountant who lives in Caracas, Venezuela. “We went for it.”

Pantoja, 62, is one of nearly 300,000 people diagnosed with thyroid cancer each year in the world. 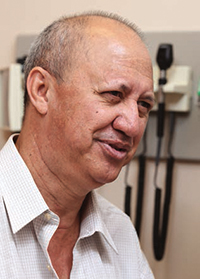 For decades, the standard treatment was to administer repeated and often ineffective doses of radioactive iodine, and sometimes chemotherapy,” says Steven Sherman, M.D., associate vice provost for Clinical Research. “About 10 years ago, with new scientific discoveries, we began recognizing the potential for treating patients with drugs that stop tumors from growing their own blood vessels.”

That’s exactly how lenvatinib works. A global study of the drug, also known as Lenvima, demonstrated a dramatic improvement in progression-free survival, with a 65% response rate.

“These are unprecedented results for thyroid cancer patients with such advanced disease,” says Sherman, who led the study.

Results from the study were published this February in the New England Journal of Medicine, coinciding with the FDA’s approval of the drug. Mouhammed Habra, M.D., associate professor of Endocrine Neoplasia and Hormonal Disorders, led the study’s Phase III component at MD Anderson.

Pantoja, who has been under the care of Steven Waguespack, M.D., professor of Endocrine Neoplasia and Hormonal Disorders, directly benefited as a result of the clinical trials. So far, he hasn’t experienced many of the side effects that sometimes accompany the drug, including diarrhea, fatigue, nausea and weight loss. He is, however, among the 40% of patients whose blood pressure rises after taking Lenvima. He’s now on medication to keep his blood pressure in check.
“Lenvima appears to be working,” says Pantoja, who underwent several surgeries to remove sections of his arm bone after the cancer spread. “I’m already seeing a 75% reduction in thyroglobulin.”

The decline in thyroglobulin — a protein produced by both normal and cancerous thyroid tissue — is usually good news for patients being treated for advanced thyroid cancer.

Pantoja’s grasp of the medical procedures that determine his fate are testament to the long road he’s traveled. His journey began in 2000 when doctors removed a small nodule from his thyroid.

Since then, his thyroid has been removed and he’s undergone radioactive iodine treatments and arm surgeries, including one to implant a prosthetic bone that replaced much of his humerus.

This March, the cancer appeared to be moving into his chest.

“We were really getting worried,” he says. “And then Dr. Waguespack said, ‘You won’t believe this, but there’s this new drug, just approved, that might work for you.’”

“It’s been a long fight,” he says. “But I think we’ve finally found a reason to be happy.”

By Ron Gilmore
MD Anderson collaborates on world’s first skull-scalp transplant
Doctors from MD Anderson and Houston Methodist Hospital have performed what is believed to be the world’s first partial skull and scalp transplant on a man whose treatment for a rare cancer of the scalp muscle left him with a deep head wound that wouldn’t heal.
Treating the cancer patient, not just the patient’s cancer
Palliative care and hospice care aren’t synonymous. Palliative care is a branch of medicine that helps patients deal with the physical side effects and emotional stress that come with cancer treatment and diagnosis. Meet the team that improves quality of life for patients.
The engines powering the moon shots
To better understand the Moon Shots Program, we offer a look at the 10 platforms that drive the research.
Jenna Arnold is reducing risk while leaving menopause for later
Like most parents, Jenna Arnold is doing all she can to ensure that she’ll live a long life to see her son, Jack, grow up and pursue his dreams. Women such as Arnold, who carry BRCA gene mutations, are participating in a first-in-the-nation MD Anderson clinical trial to reduce their risk of cancer while leaving menopause for later.
MD Anderson’s got talent
When they aren’t fighting cancer, these faculty and staff members are expressing themselves
Where in the world is MD Anderson?
The MD Anderson Cancer Network® allows the institution to collaborate with healthcare providers to provide MD Anderson’s model of multidisciplinary care to patients in the communities where they live.
The gift that’s giving life to discoveries
Ten years after San Antonio businessman Red McCombs and his wife, Charline, made a transformative $30 million gift to MD Anderson, their generosity is showing a big impact.
On track for success
Mentors’ guidance is invaluable for young scientists and clinicians
The survivor and the summit
Bree Sandlin’s inner strength and inner voice helped her conquer Stage III triple-negative breast cancer and Mount Kilimanjaro.