Top
Previous Article
Next Article
Summer 2015 : Conquest: Where in the world is MD Anderson?

Where in the world is MD Anderson?

The MD Anderson Cancer Network® allows the institution to collaborate with healthcare providers to provide MD Anderson’s model of multidisciplinary care to patients in the communities where they live.

More than 14 million cancer cases are diagnosed worldwide each year — and that number is expected to grow.

In fact, World Health Organization scientists predict that number will reach 24 million cases a year by 2035. To avoid a “tidal wave” of cancer tomorrow, MD Anderson and other health care institutions are taking action today. 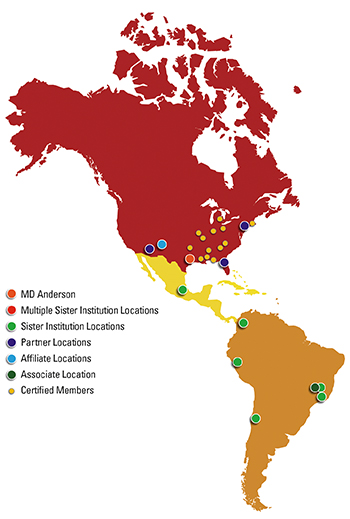 “Our mission and vision challenge us to be the single most impactful institution in relieving the burden of cancer globally, and we can achieve this by extending our brand of prevention, care, research and education to like-minded organizations worldwide,” says MD Anderson President Ron DePinho, M.D.

To do that, the institution’s Global Academic Programs (GAP) facilitates the Sister Institution Network — the largest global network of cancer centers (32 institutions in 23 countries) working collaboratively on research and education. Currently, MD Anderson is involved in 93 international research projects in 24 countries. The MD Anderson Cancer Network® allows the institution to collaborate with healthcare providers to provide MD Anderson’s model of multidisciplinary care to patients in the communities where they live. Here’s a look at new cancer cases by region and where the Cancer Network and GAP are teaming with hospitals, health systems and institutions across the nation and around the globe in Making Cancer History®. 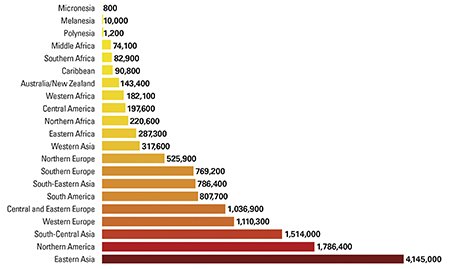 By Ron Gilmore
MD Anderson collaborates on world’s first skull-scalp transplant
Doctors from MD Anderson and Houston Methodist Hospital have performed what is believed to be the world’s first partial skull and scalp transplant on a man whose treatment for a rare cancer of the scalp muscle left him with a deep head wound that wouldn’t heal.
Treating the cancer patient, not just the patient’s cancer
Palliative care and hospice care aren’t synonymous. Palliative care is a branch of medicine that helps patients deal with the physical side effects and emotional stress that come with cancer treatment and diagnosis. Meet the team that improves quality of life for patients.
The engines powering the moon shots
To better understand the Moon Shots Program, we offer a look at the 10 platforms that drive the research.
Jenna Arnold is reducing risk while leaving menopause for later
Like most parents, Jenna Arnold is doing all she can to ensure that she’ll live a long life to see her son, Jack, grow up and pursue his dreams. Women such as Arnold, who carry BRCA gene mutations, are participating in a first-in-the-nation MD Anderson clinical trial to reduce their risk of cancer while leaving menopause for later.
MD Anderson’s got talent
When they aren’t fighting cancer, these faculty and staff members are expressing themselves
The gift that’s giving life to discoveries
Ten years after San Antonio businessman Red McCombs and his wife, Charline, made a transformative $30 million gift to MD Anderson, their generosity is showing a big impact.
On track for success
Mentors’ guidance is invaluable for young scientists and clinicians
The survivor and the summit
Bree Sandlin’s inner strength and inner voice helped her conquer Stage III triple-negative breast cancer and Mount Kilimanjaro.
A new drug delivers renewed optimism
The FDA-approved lenvatinib is helping thyroid cancer patients who don’t respond to standard treatment