Top
Previous Article
Next Article
Spring 2012 : The Privilege Is in the Service

While the cancer journey is an individual road, there is common ground where patients’ experiences intersect, regardless of their path in life.

BY Julie A. Penne

On a busy day, the workroom in the medical oncology clinic brings together faculty and staff from MD Anderson, The University of Texas Health Science Center and Lyndon B. Johnson General Hospital. Photo: John Everett

It doesn’t matter if they live in luxurious homes or modest housing, maintain plump bank accounts or keep just enough cash on hand for necessities, drive a new car or take mass transit to appointments. They share moments of uncertainty, anger and fear for the future.

Cancer is the common denominator, and it’s a powerful one.

As patients at either MD Anderson or Houston’s Lyndon B. Johnson General Hospital (LBJ), one of the busiest county hospitals in the nation serving one of the largest uninsured populations, they also share access to some of the best cancer care in the United States.

It’s an unusual model and one that provides mutual benefit to MD Anderson, the Harris County Hospital District (HCHD), which operates LBJ, and patients.

Since 1995, MD Anderson teams have provided innovative and multidisciplinary cancer care for thousands of LBJ patients at no expense to Harris County.

During the past 17 years, the service has expanded from one part-time medical oncologist coming one day a week to 15 regular attending faculty, 18 fellows, more than a dozen part-time clinical faculty and numerous professional support employees.

In addition to the medical oncology clinic led by Alyssa Rieber, M.D., chief of medical oncology at LBJ and assistant professor in MD Anderson’s Department of General Oncology, faculty and staff run three other busy clinics. 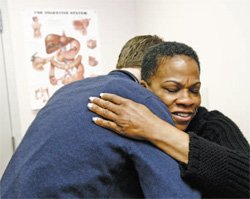 Sonya Hicks says her oncologist, Patrick Archie,
M.D., was honest and open with her. For that,
she will always remember him as one of her
"angels."
Photo: John Everett

Every day of the week, there is at least one MD Anderson team — often two teams — seeing patients in clinic, making rounds or performing surgery and other procedures at LBJ. Patients at LBJ may also participate in several clinical trials approved by MD Anderson’s Institutional Review Board.

The financial bottom line is an annual contribution of more than $1.5 million in professional services provided to care for uninsured, underinsured and underserved patients through HCHD. As part of its community service tradition,
MD Anderson pays the salaries and benefits of employees who support this work.

But for patients who have access to MD Anderson physicians and fellows, the bottom line is hope, dignity, specialized expertise and a motivated team that cares about every aspect of their lives.

It’s all about the patients and collaboration 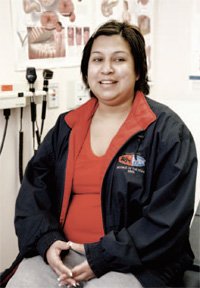 For 47-year-old Sonya Hicks, diagnosed with advanced rectal cancer in May 2011, it wasn’t just her doctor’s clinical experience that won her over. Her “angel team” were Patrick Archie, M.D., a third-year hematology and oncology fellow, and Curtis Wray, M.D., a surgical oncologist from UT Health.

She says they were honest with her, taking the time to answer her questions and listen. Today, after radiation at Bayshore Medical Center, chemotherapy and surgery by Wray at LBJ, Hicks has no evidence of cancer.

“I’ve started my walk toward healing,” says Hicks, who cut off one of her 200 cornrows every day to take control of her hair loss during chemotherapy. “After I was told I had cancer, I prayed, and God told me that He would take care of me. But I also knew that if I wanted to live, I had to get with the program. Dr. Archie and Dr. Wray helped me every step of the way.”

Angela Martinez, a 31-year-old wife and mother of two children, says she knew she was with the right team after her first treatment. Diagnosed with lymphoma in her right thigh, Martinez says the lump, nearly the size of a cantaloupe, shrunk almost immediately after her first chemotherapy infusion.

After her chemotherapy, Martinez’s oncologist, Siobhan Lynch, M.D., third-year hematology and oncology chief fellow, recommended radiation at MD Anderson. Every day for six weeks, Martinez drove herself and her two children on summer break to the Texas Medical Center (TMC) for treatment while her husband continued working.

“Dr. Lynch and the whole team were just awesome,” Martinez says. “They were independent, strong and so supportive.”

Martinez is one of many LBJ patients referred to MD Anderson’s TMC campus for part or all of their treatment, including radiation treatment, specialized surgery, stem cell transplantation or care for complex or uncommon cancers such as leukemia and sarcoma.

Lewis Foxhall, M.D., vice president for health policy at MD Anderson, says the LBJ program is a natural extension of the institution’s commitment to the underserved and uninsured.

While some Harris County residents with cancer need the specialized services that can only be provided at the cancer center, many uninsured or underinsured patients can be treated by MD Anderson teams at the LBJ facility. 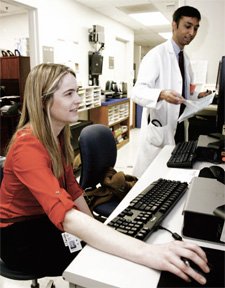 This allows them to establish a “medical home,” Foxhall says. Many patients have conditions, such as diabetes or high blood pressure, which require regular attention during and after their cancer treatment.

“The team at LBJ truly is dedicated to providing the best cancer care with the resources available to them. They care a great deal about their patients and apply many aspects of multidisciplinary care practiced at MD Anderson’s Texas Medical Center campus,” Foxhall says. “We take a team approach to care and work hand in glove with our colleagues at UT Health and LBJ.”

Among the beneficiaries of the program are the 18 medical oncology fellows who spend their second year and part of their third year seeing patients at LBJ in a general oncology setting.

Working under dedicated MD Anderson faculty, the fellows see a wide range of patients, and they are responsible for all aspects of their care.

“Case-based training is vital to our fellows’ experience. They have the advantage of seeing a patient through the entire spectrum of care, from initial diagnosis to treatment to follow up,” Rieber says. “In the first year and a half of their fellowship on the main campus, fellows work closely with attending oncologists but they don’t always fully connect with the patient. At LBJ, they’re responsible for each patient’s total care, though under supervision.”

The educational component of the LBJ program is key, says Vicente Valero, M.D., the first faculty member assigned to LBJ and a primary force behind the growth of the clinical program. He continues to attend multidisciplinary breast cancer conferences and reminds fellows “to think about service.”

After his diagnosis, Juan Hinojosa was
referred to MD Anderson to have the
tumor in his chest removed. Today,
after surgery at MD Anderson and
chemotherapy at LBJ General Hospital,
he is disease free.
Photo: John Everett

“It’s important that the fellows at LBJ realize that they, as doctors, may be the only advocate or caregiver that patients have,” says Valero, professor in MD Anderson’s Department of Breast Medical Oncology.

Valero is one of the dozen MD Anderson senior faculty regularly scheduled at LBJ to teach and supervise fellows. He brings a depth of experience with breast cancer just as Katherine Pisters, M.D., professor in MD Anderson’s Department of Thoracic/Head and Neck Medical Oncology, contributes expertise in lung cancer.

According to Harris County Hospital District President and CEO David Lopez, the MD Anderson practice at LBJ is a national model for public-private health care partnerships, providing seamless care for patients through collaboration.

“Our arrangement with MD Anderson offers so many benefits. Our patients get great care without going into the TMC. The taxpayers of Harris County keep their dollars focused on other needs.
MD Anderson extends its research reach into the community. And many young oncologists get frontline experience,” Lopez says.

“All of the physicians at LBJ, including pathologists, surgeons and radiologists, are working for the patient, not competing against each other,” he continues. “It’s similar to the TMC, which was built on competition, but its collaborations sustain it.”

Anesthesiology team focuses on the patient
MD Anderson's anesthesiology team evaluates, prepares and monitors every surgical patient, helps with special procedures, conducts research and emphasizes continued education.
Anesthesiology technologists enhance OR contributions
Center takes aim at new cancer targets
Faces of care
A closer look at cancer screening guidelines
If the release of the U.S. Preventive Services Task Force (USPSTF) recommendations on screening has taught us anything, it’s that not all cancer screening guidelines are created equal.
Room service part of personalized approach
Imagine ordering your hospital meals from a special menu and having them delivered by hotel-trained wait staff. Or, as a caregiver, eating well while supporting a family member.
Latest MD Anderson news

Connection becomes circle of comfort for patients
Gus Gutman, Bob Kukla and Larry Link probably would not have met except for being blindsided by bladder cancer.
The voice center
New life for damaged vocal cords
Audio: Conquest spring 2012