A mother's joy, a patient's hope

More new mothers who experience the joy of birth are giving transplant patients all over the world a chance for rebirth.

They are donating their baby’s stem-cell-rich umbilical cord blood to MD Anderson’s Cord Blood Bank, a program that has been growing exponentially since it collected the first unit in 2005. 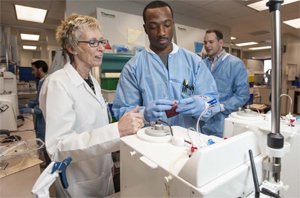 The first dedicated bank in the United States was opened in New York in 1993, as research in cord blood transplants sprouted. Today, that bank is the largest in the nation, but MD Anderson’s young bank is the fastest growing and has the largest collection of cord blood units from diverse populations.

Between 2005 and the end of fiscal year 2012, the MD Anderson Cord Blood Bank collected more than 42,000 units with more than 16,000 banked and listed on the international registry. Nearly 800 of the units were transplanted in patients at MD Anderson, throughout the United States and the world. Other units, not suitable for transplant, are used in research.

Starting in 2005 with The Woman’s Hospital of Texas, which has the largest obstetrical program in Houston, and then adding Ben Taub General Hospital one year later, which delivers a large percentage of babies from minority populations, the program now has four major Houston hospitals on board.

Later this summer, Memorial Hermann Hospital and HarrisHealth’s Lyndon Baines Johnson Hospital will join the program. There is no charge for patients donating the cord blood to MD Anderson’s Cord Blood Bank, unlike most private cord blood banks, which store the units for only that family’s possible use.

“It always will be the parents’ decision if they want to donate their child’s cord, but once they hear that the tissue is discarded after delivery and that it won’t affect their baby, they are open to the idea,” says Sue Armitage, assistant director of MD Anderson’s Cord Blood Bank. “Many more parents are now aware of this option than when we started, but it’s always important to take time to answer all their questions.”

In addition to the Houston hospitals where MD Anderson Cord Blood Bank representatives are on-site to speak with parents, there is an outreach program at hospitals in Detroit and California. Plus, a collection kit is available to any expectant mother who contacts the bank, but who lives in an area that does not have access to cord blood banking. The kit is accompanied by an online training module for physicians, who will collect the unit to be sent to Houston.

All this growth is forcing the Cord Blood Bank to move from the area it now shares with the Stem Cell Processing Lab on the North Campus to a newly renovated facility near South Campus. The new facility will feature cryostorage for 50,000 units and expanded clean rooms for meticulous processing and testing of the cells.

About 50 people work for the bank, half are recruiters working at partner hospitals. Depending on the hospital, bilingual recruiters are available either five or seven days a week, 24 hours a day, to meet with parents before the delivery and collect the cord blood after the baby is born.

'A natural and easy decision'

So when Trevino and her husband were expecting their second child, Ava, five years ago, the decision to donate the baby’s cord blood really wasn’t a decision at all. It was a given.

“Working with patients every day, you see all that they go through and you want to take that involvement to another level,” she says. “We were so happy to donate Ava’s cord blood, especially because of the great need for donors from minorities. It was a natural and easy decision.”

Trevino is one of many mothers who have donated their babies’ cord blood to the MD Anderson Cord Blood Bank.

Turn to The Learning Center for cancer and health information
Insights leveraged to improve outcomes
A fully integrated approach
Collaboration helps speed drug discovery
Calm in the midst of storm
MD Anderson's garden spaces are an integral part of campus design, acting as respites from the concrete, traffic and Houston heat, but playing their own surprising role in the healing process.
More than an ounce of prevention
Studies build knowledge
Military service provides ‘an accidental gift’
Experience and values shape careers and patient care
Exposing the silent killer
Intervention brings awareness to second-hand smoke exposure in households
Social media reminds patients, caregivers they're not alone

By Laura Nathan-Garner
Mexico, Texas team up to reduce tobacco use
Is your neighbor a health benefit or health risk?

Is your neighbor a health benefit or health risk?

By Katrina Burton
Angelo Rizzo and Eddy Davis
Cancer survivors use exercise during, after treatment
Happiness is a warm blanket
The Volunteer Endowment for Patient Support