Every cancer patient has a story.

Nadia Jones, a 5-year-old being treated for rhabdomyosarcoma in the Children's Cancer Hospital at MD Anderson, was the youngest to share her upbeat attitude and story at the campaign launch.

And many were invited to share them as MD Anderson launched the public phase of its $1 billion Making Cancer History®: The Campaign to Transform Cancer Care at the Hilton Americas-Houston on Feb. 18.

During an evening that celebrated the institution’s dedication to its mission, eight patients — ages 5 to one month shy of 80 — stood on highlighted platforms placed at intervals around the room. Each speaker concluded his or her story by drawing a red slash through the word “cancer” that appeared on a projection screen, symbolically eliminating cancer from his or her life.

The star-studded affair was hosted by Phyllis George, mistress of ceremonies, and featured Barbara Padilla, a soprano who sang several operatic arias and shared her story of surviving Hodgkin’s lymphoma.

With the promise of changing the way cancer is perceived and managed throughout the world, MD Anderson has already raised $780 million from community leaders and benefactors, foundations and corporate supporters.

“Hopes are that the $1 billion mark will be reached with help from the public by December 2011, which is one year ahead of schedule,” says Patrick Mulvey, vice president for Development. 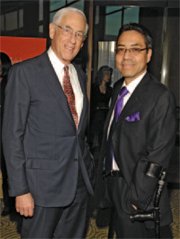 “Now is the time for this campaign because of a convergence of opportunity and need,” says John Mendelsohn, M.D., president of MD Anderson. “We now have the knowledge and the scientific tools to identify abnormal genes and molecules in an individual patient’s cancer. With this information, we can select therapies that have a high probability of working by targeting those abnormalities.”

This ability is due in large part to what we have learned from the Human Genome Project, which was completed nearly a decade ago. Projections are that in 2012, a person’s whole genome can be sequenced in a week for $1,000, Mendelsohn says.

That’s the opportunity. The need is for funding.

“We have dozens of translational and clinical investigators and fabulous new technologies. Together, they help us apply our knowledge more quickly and select the right therapy for the right patient at the right time,” Mendelsohn says. “Currently, this research is not paid for by insurance companies or by Medicare. Philanthropic funding is crucial to our success.”

Why invest in cancer care?

Naturally, donors want to know that the money they give will be spent in a productive way to do something important, meaningful and innovative.

“If your goal is to advance health care in a disease that the World Health Organization says is going to be the number one killer on the planet next year,” Mendelsohn says, “and if your goal is to invest with people and institutions that have a track record, then I think The University of Texas MD Anderson Cancer Center is a good choice.”

A group of virtual institutes forms the centerpiece of the campaign. Through them, MD Anderson faculty leaders have created a new approach to cancer research designed to bring together people from diverse departments and disciplines in programs and centers of excellence that focus on the entire continuum of cancer care, from prevention to survivorship. Funds raised in the campaign are essential to launching these institutes and driving concerted progress. The five institutes include:

The Duncan Family Institute for Cancer Prevention and Risk Assessment

Established through a $35 million contribution from the Dan L. Duncan Family Foundation, this institute will break new ground in addressing genetic and lifestyle risk factors that lead to cancer.

The Institute for Basic Science

This institute will focus on areas most critical to advancing fundamental knowledge about cancer genetics and genomics; epigenetics; stem cell and developmental biology; structural biology; environmental and molecular carcinogenesis; biological pathways; and inflammation and cancer.

The Institute for Cancer Care Excellence

This institute has created a program focused on finding ways to enhance the quality of cancer care, ensure the safety and well-being of patients, measure the effectiveness of treatment with accurate clinical outcomes data and reduce costs of care.

The Institute for Personalized Cancer Therapy

The goal of this institute is to select individualized cancer therapy for each patient based on the genetic and molecular abnormalities in that particular patient’s cancer.

This institute was launched in 2005 with a $30 million gift from the Charline and Red McCombs family of San Antonio. It focuses on translating basic science discoveries about the genes that cause cancer and the molecular pathways that promote its growth, survival and metastasis into new diagnostic tests and treatments targeting key genes and pathways.

Investigating the Nature of Cancer
Though they are seldom seen by patients, pathologists take the first look at a tumor, evaluate what they discover, and help answer all-important questions for physicians and patients.
SPORE Grants Turn Into Hope for Patients
Individualized Options for Prostate Cancer Patients
Manage Symptoms Throughout Cancer Journey
Baseball Great Aaron Latest 'Living Legend'
New Choice for Cancer Patients in Turkey
Attacking Childhood Obesity With 'CAN DO' Attitude