Ten years after San Antonio businessman Red McCombs and his wife, Charline, made a transformative $30 million gift to MD Anderson, their generosity is showing a big impact.

A decade after Red and Charline McCombs gave $30 million to MD Anderson, the funds are fueling groundbreaking advances in cancer research

Ten years ago, San Antonio businessman Red McCombs and his wife, Charline, made a transformative, unsolicited $30 million gift to establish the Red and Charline McCombs Institute for the Early Detection and Treatment of Cancer at MD Anderson. The donation was the largest the institution had received to fund research at the time, and led to the most aggressive expansion of cancer research in its history.

The 87-year-old McCombs says his desire to give comes from examples set by his parents.

“My father made 25 bucks a week, which he’d give to my mom so she could put $2.50 aside for the church,” he says. “And although we didn’t have any extra space, and certainly no extra money, Mom would take in children and keep them while their families worked out their problems.”

McCombs first encountered MD Anderson as a college student while visiting a patient. He was impressed by what he saw, and the experience stuck with him. Years later, he reached out to then-President Charles LeMaistre (1978-1996) to offer some praise.

“I called Mickey LeMaistre and complimented him on the care I saw being offered to everyone there,” he says. “Mickey explained how everyone they see is troubled, either because they’re a patient or because a loved one is a patient, so they take extra care not to add to that. I told him it was the best program I’d ever seen.”

Through the years, McCombs’s relationship with MD Anderson continued to develop. He joined the MD Anderson Cancer Center Board of Visitors (BOV) in 1986, led the Institutional Initiatives Committee (1993-1994) and chaired the BOV (1995-1997). His daughter, Marsha Shields, joined the BOV in 2009.

“I have a soft place in my heart for MD Anderson because they’re the best in the world at what they do,” he says.

A gift for prevention

In 2005, McCombs received a brochure describing the South Campus Research Initiative (SCRI), and its potential impact on cancer care and research immediately appealed to him. Once again, he picked up the phone. 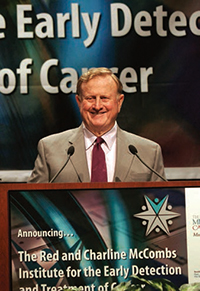 “I told John Mendelsohn (MD Anderson president, 1996-2011) the SCRI was the greatest approach to this dreadful problem, and I’d give $25 million to support it,” he says. “Then Dr. Mendelsohn called back and said for $30 million they could put my name on the facility. I said, ‘For $5 million more, we’d like that.’”

From there, given McCombs’ belief in the value of early detection, the McCombs Institute for the Early Detection and Treatment of Cancer was born.

“The best treatment we have in the world — with all the zillions of dollars and brilliant scientists working on this — is early detection and prevention. Period,” McCombs says.

Sam Hanash, M.D., Ph.D., who was recruited to lead the McCombs Institute in 2009, shares McCombs’ passion. About 20 years ago, he met a patient who changed the trajectory of his career.

“I diagnosed a patient with an advanced-stage brain tumor,” Hanash says. “The father was so distraught and wanted to know why we couldn’t have detected the cancer earlier when it probably could’ve been cured. That’s what locked me into wanting to see how we can prevent cancer and detect it earlier.”

Now, 10 years after the McCombs’ gift, more than one-third of MD Anderson research is channeled through the McCombs Institute and its seven centers, each devoted to a particular area of cancer research (see below).

The numerous groundbreaking advances made in the first decade of the McCombs Institute are extremely promising. Yet, McCombs didn’t become a legendary entrepreneur by being satisfied with standing still. In a letter to Hanash, he indicated that “the institute is on the right track but must press onward — because if you’re on the right track and stop, you’ll be run over.”

“Mr. McCombs is eager to see scientific discovery applied in the clinic. And that’s exactly what we’re committed to — translational medicine — so that the discovery passes what’s known as the `valley of death’ — the abyss that must be crossed when laboratory research is translated into drugs or therapies that help patients,” says Hanash. He adds that in another 10 years he expects early detection to have a marked impact on cancer mortality worldwide.

“This disease is a bigger threat to the world than terrorism,” McCombs says. “Someone in every extended family is going to go down with cancer. It’s that big of a robber of life and dignity, and we all need to do everything we can to stop it.”

More than one-third of MD Anderson’s research is channeled through the Red and Charline McCombs Institute for the Early Detection and Treatment of Cancer. Here’s an update on the impact being made by some of the institute’s many centers:

By Ron Gilmore
MD Anderson collaborates on world’s first skull-scalp transplant
Doctors from MD Anderson and Houston Methodist Hospital have performed what is believed to be the world’s first partial skull and scalp transplant on a man whose treatment for a rare cancer of the scalp muscle left him with a deep head wound that wouldn’t heal.
Treating the cancer patient, not just the patient’s cancer
Palliative care and hospice care aren’t synonymous. Palliative care is a branch of medicine that helps patients deal with the physical side effects and emotional stress that come with cancer treatment and diagnosis. Meet the team that improves quality of life for patients.
The engines powering the moon shots
To better understand the Moon Shots Program, we offer a look at the 10 platforms that drive the research.
Jenna Arnold is reducing risk while leaving menopause for later
Like most parents, Jenna Arnold is doing all she can to ensure that she’ll live a long life to see her son, Jack, grow up and pursue his dreams. Women such as Arnold, who carry BRCA gene mutations, are participating in a first-in-the-nation MD Anderson clinical trial to reduce their risk of cancer while leaving menopause for later.
MD Anderson’s got talent
When they aren’t fighting cancer, these faculty and staff members are expressing themselves
Where in the world is MD Anderson?
The MD Anderson Cancer Network® allows the institution to collaborate with healthcare providers to provide MD Anderson’s model of multidisciplinary care to patients in the communities where they live.
On track for success
Mentors’ guidance is invaluable for young scientists and clinicians
The survivor and the summit
Bree Sandlin’s inner strength and inner voice helped her conquer Stage III triple-negative breast cancer and Mount Kilimanjaro.
A new drug delivers renewed optimism
The FDA-approved lenvatinib is helping thyroid cancer patients who don’t respond to standard treatment