Understanding the “what” and “how” of telomerase may be critical in treating and eliminating cancer. Telomerase is the enzyme that adds DNA sequence repeats (“TTAGGG” in all vertebrates) to the ends of telomere regions, thereby rescuing malignant cells from destruction in telomere crisis. 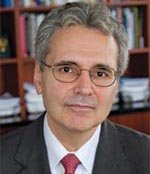 “Telomerase is overexpressed in many advanced cancers, but assessing its potential as a therapeutic target requires us to understand what it does and how it does it,” says senior author Ronald DePinho, M.D., MD Anderson president.

In a series of experiments, the team found:

“These findings allow us to anticipate how tumor cells might respond to telomerase inhibition and highlight the need to develop drug combinations that target telomerase and these adaptive resistance mechanisms,” DePinho says.

Genomic instability caused by an erosion of the protective caps on chromosomes, followed by activation of an enzyme that reinforces those caps, allows malignant cells to evade destruction and acquire more deadly characteristics, according to

The research focused on telomeres. Telomerase is inactive in normal cells. In cancer, the enzyme telomerase becomes activated and stabilizes telomeres, preserving damaged cells so they survive and reproduce.

In a strain of mice engineered to develop prostate cancer, all mice that went through this two-step process developed lethal cancer and 25% had the disease spread to the spine. Two groups of mice that avoided this cycle developed only precancerous lesions or localized prostate cancer.

Chin and MD Anderson President Ronald DePinho, M.D., and colleagues conducted this research while at Dana-Farber Cancer Institute in Boston.

Telomeres — repetitive nucleotide sequences at the tips of chromosomes that prevent genomic damage during cell division. With each division the telomeres shorten, leading eventually to genomic instability and cell death, a period termed “telomere crisis.” Telomeres have been compared with the plastic tips on shoelaces. They prevent chromosome ends from fraying and sticking to each other, which would scramble an organism’s genetic information and cause diseases such as cancer.

Telomerase — an enzyme that adds DNA sequence repeats (“TTAGGG” in all vertebrates) to the ends of telomere regions to preserve their length across cell divisions. Telomerase activity is low or absent in normal cells, which have enough segments of repeat nucleotides (telomeres) at the ends of their chromosomes that protect DNA stability during cell division. In cancer, telomerase becomes active during telomere crisis and saves the genomically abnormal cells, allowing them to reproduce.