Top
Previous Article
Next Article
Fall 2012 : 'The final marker is the patient'

Charles Cleeland, Ph.D., has devoted his life to understanding and lightening patients' symptom burden from pain to fatigue and beyond. Photo: Wyatt McSpadden

There were probably times when Charles Cleeland, Ph.D., — a champion for patients’ quality of life — thought he was tilting at windmills.

In those days, oncologists and scientists were working so diligently to find cures for cancer that they had little time to consider treatment side effects. But that didn’t deter Cleeland, professor and chair of MD Anderson’s Department of Symptom Research.

Starting with the most common symptom — pain — he persevered. He is the pioneer behind the Brief Pain Inventory that set up the 0-10 scale, allowing patients to express their level of pain.

And while acceptance of the need to treat pain on the basis of patient self-report took years, it is now a reality around the world, translated into many languages.

And he hasn’t stopped there. As cancer research moves toward personalized care so patients’ therapies can be tailored to their genetic make-up, he continues the campaign for incorporating patient-reported side effects into drug development.

“We might focus on some biomarker,” says Nora Janjan, M.D., of the National Center for Policy Analysis. “But the final marker is the patient.”

Janjan is one of an increasing number of people from academia, the pharmaceutical industry, policy groups and government agencies who come together under the auspices of Assessing Symptoms of Cancer Using Patient-Reported Outcomes (ASCPRO). This independent working group is headed by Cleeland and Jeff A. Sloan, Ph.D., professor in the Department of Oncology and Health Sciences Research in the Division of Biostatistics at Mayo Clinic’s College of Medicine.

Established in 2006, ASCPRO reviews the current use of symptom measures as clinical-trial and clinical-research outcomes and makes recommendations to facilitate the use of symptom assessment, based on patient-reported outcomes (PRO). Recently, the group commissioned a multisymptom task force to make recommendations for measuring multi-symptom endpoints in cancer clinical trials, published Aug. 28, 2012 (online in advance of print) in the journal Cancer.

Sloan, who met Cleeland at an international meeting on patients’ quality of life, immediately recognized a potential mentor. When he moved to the Mayo Clinic’s College of Medicine in 1995, he started asking questions like:

“Then, Charlie and I were at a meeting in Barcelona with top names in the field from Europe, the United States and Canada also asking these questions,” Sloan says. “I thought if we could get these people together, we could do something.

“We wrote some papers on clinical significance that described the state of the science and methodological advances that were being made. We further collaborated on foundational work related to the guidance document released by the U.S. Food and Drug Administration (FDA). That led us to form ASCPRO to serve as a resource for people who wanted to do patient-related outcomes research and needed objective assessment tools,” he says.

While the FDA document, in addition to assuring drug safety, mandates that a clinical benefit must be shown, methods for judging that benefit have been controversial. In the June 6, 2010, edition of the Journal of Pain and Symptom Management, Cleeland and Sloan put forward that: “The effect of a treatment on how a person feels or functions is best known through patient self-report.” 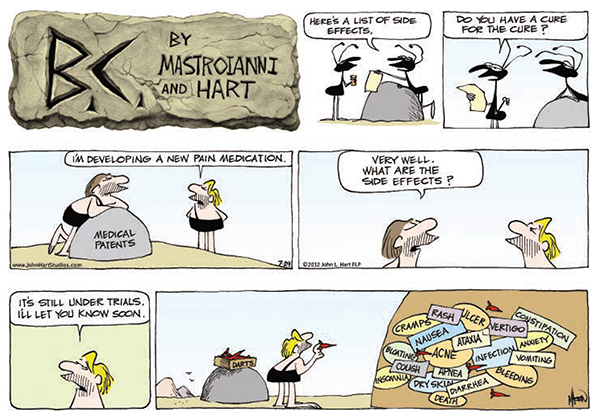 Charles Cleeland, Ph.D., and his diverse associates from across academia, industry, policy
groups and government agencies are crusading for increased attention on treatment side
effects and the importance of self-report.
Reprinted with permission of John L. Hart FLP

Can we trust self-reports?

Patient self-report has not always been seen as reliable by the medical community.

“In the 1950s, consensus was that patients weren’t good sources for rating pain, so clinicians were doing it,” Sloan says. “That was the state of knowledge because we didn’t have a reliable measure of pain. Now, we do, and it’s being used.”

“Lots of doctors still don’t pay attention. It’s not part of their checklist,” Janjan says. “They aren’t aggressive enough in taking care of treatment-related symptoms. Yet, it’s only through patient-reported outcomes that we can identify and track what patients truly experience.

“Any clinical therapy or trial is for the patient. We get so focused on the war that we forget the battle is for patients to do better, for them to remember the cure and support, not to deal with how they suffered through and after treatment.”

Despite the fact that patient-reported outcomes have become more accepted, the concept bumps against significant barriers.

“The major battle is still over which tool to use to address symptoms,” Sloan says. “In fact, we won’t go too far wrong because there are many tools out there that have been validated — more than 10,000 at last count. When people in the field can’t agree over methods, doubts are raised.”

Another barrier, he says, is the “perfectionism streak.” Blood pressure cuffs aren’t perfect either, he says, but we know and accept them.

“The classic example is Charlie’s work in pain and the 0-10 scale, asking patients ‘how’s your pain?’ It’s very simple. This has given us data that 6 is a clinically significant level of pain.”

Ann O’Mara, Ph.D., head of Palliative Care Research, Community Oncology and Prevention Trials Research Group in the Division of Cancer Prevention at the National Cancer Institute (NCI), manages the budget for PO1 (Program Project) and RO1 (NIH Research Project) grant-funded studies and has known Cleeland since she arrived at NCI in 2001.

“My role with ASCPRO is very limited for ethical reasons,” she says. “I bring the National Institutes of Health perspective on what NCI and NIH funds, the organizational structure of NCI and the bigger picture of research that it brings to symptom research. I also introduce other investigators with similar interests, of whom the ASCPRO group might not be aware.

“We control disease with many treatments now, but create a whole new set of symptoms. Charlie’s push and that of ASCPRO is to study drug development for its treatment value, but also how it relieves, or doesn’t cause, symptoms.”

“This is where communication between patient and physician is so important,” she says. 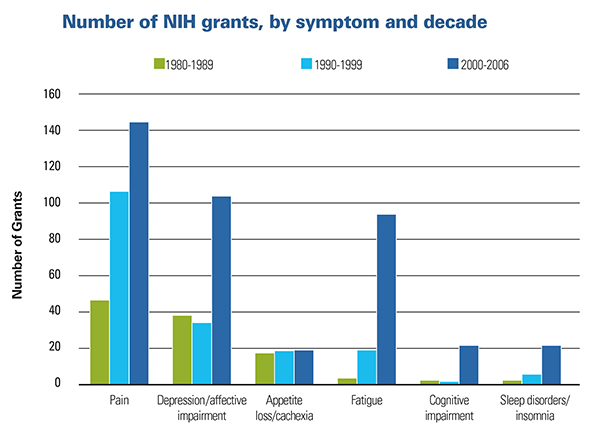 Used with permission from the National Institutes of Health.

Connie Chen, Pharm.D., and senior director of Global Outcomes Research, Oncology at Pfizer Inc., met Cleeland more than 10 years ago when they both researched arthritis and pain.

“Pfizer places a great deal of importance on patients in its clinical trials,” she says. “Listening to patients gives us the opportunity to hear what effect a drug is having on them. They help us know how we should develop a drug moving forward, so we strive to get self-reported symptom information early into the Phase I/II stage of a clinical trial whenever possible.”

However, she admits there are practical and logistical problems in gathering patient-reported data. “When we put in questionnaires for patients, we do this in a scientifically rigorous manner — similar to other endpoints within the clinical trial and realizing the costs to collect, analyze and report the results. But we know it’s going to benefit the end-user.

"The problem is that there can be differences in the way information is understood. We need to do a lot more education.”

Yasuhiro Torigoe, Ph.D., at Genentech, met Cleeland several years ago and was immediately interested in his PRO work.

Currently, Genentech has 30 to 40 Phase III trials that use PRO in breast, gastric, lung and other cancers, with many more in the pipeline.

When it comes to selecting a measurement tool for many of Genentech’s studies, Torigoe choses the MD Anderson Symptom Inventory (MDASI), developed by Cleeland and his group.

Taking the MDASI to another level

To include possible side effects on a drug’s labeling, the FDA specifies that researchers must employ a standard published manual. Torigoe went an extra step to guarantee he could use the MDASI.

“We knew its scientific merit, and I wanted to use it for trials in brain and lung,” he says. “I encouraged Charlie to develop the manual, even gave him an outline and reviewed it several times.”

Like other entities, the pharmaceutical companies have encountered barriers in incorporating multi-symptom endpoints into their clinical trials. These include:

However, Torigoe firmly believes that the ultimate goal is not only for a patient to survive, but also to have better quality of life without the symptoms of chemotherapy, which some of the newer targeted therapies offer. “Symptom assessment is critical to showing patient benefit from these new treatments,” he says.

Chen agrees, “The patient’s perspective should be heard so we can share, better understand and educate a wider audience of decision- and policy-makers, and other health care professionals. And so patients can have a larger say in the choice of therapy, taking into consideration how treatments affect their symptoms and day-to-day well-being and function. We can’t have a trial without the patient’s voice.”

Due to his decades-long perseverance, Cleeland is no longer tilting at windmills. Rather, along with a growing host of partners across academia, industry, policy groups and government agencies, he’s forging inroads toward ensuring the patient’s voice will be heard — and heeded.

By Katrina Burton
MD Anderson No. 1 in cancer care again

Childhood cancer survivors find new role at MD Anderson
Nurses do their best to understand the patient’s perspective as they provide care. However, none can relate as well as three MD Anderson nurses. Shelby Robin, Anna Smith and Richard Wang know first-hand the ups and downs of being a patient because they were patients themselves as children.
Interns see their cancer up close for the first time
Chaplains bring a spiritual presence to stem cell transplants
The room is quiet, but the sound of hope still rings loud and clear as a young cancer patient prepares for his stem cell transplant.
Readers seek research, treatment news