Imagine a cancer treatment so promising someone travels 5,000 miles to MD Anderson to receive it.

That person is Maria Escalera.

That treatment is an experimental gene therapy drug called FUS1 nanoparticle. Escalera got to MD Anderson from her home in Venezuela by airplane. The drug got to the clinic by way of a unique type of funding called a Specialized Programs of Research Excellence, or SPORE, grant.

“They call me their miracle patient,” says Escalera, whose tenacious lung cancer, which had spread to her pancreas and liver, has been halted by the treatment she received as part of a clinical trial. “I’m very grateful to the scientists whose research led to this drug. It has stopped the cancer, giving me precious time to travel with my husband, play with my granddaughter and enjoy life.”

Although Jack Roth, M.D., has never met Escalera, he feels he knows her well. Roth is one of the lead scientists who developed the FUS1 nanoparticle drug, and he has followed the progress of all those testing the drug’s safety, its ability to locate and get inside cancer cells using a novel delivery method, and its effectiveness against cancer.

“Drs. David Stewart and Charles Lu, both in the Department of Thoracic/Head and Neck Medical Oncology, are supervising the clinical trial. I don’t directly interact with patients in the trial to avoid any chance of bias,” says Roth, professor in the Department of Thoracic and Cardiovascular Surgery and director of the W.M. Keck Center for Innovative Cancer Therapies at MD Anderson. “Ms. Escalera is one of several patients whose cancer has responded to the therapy, which provides evidence the drug produces anti-tumor activity.

“Our team has been working on gene therapy for 20 years, and the last 10 years we also have been perfecting using tiny hollow spheres — called nanoparticles — as a new way to deliver the drug to patients whose cancer has spread,” Roth continues. “Seeing them benefit from our efforts after so many years is extremely rewarding.”

Roth says the drug wouldn’t have been developed without the financial support provided by the SPORE grant and philanthropic funding.

In the early 1990s, leaders at the National Cancer Institute wanted to provide more support for translational research, which focuses on moving basic research findings to patients, as well as moving clinical observations to the lab for exploration. The problem was that this type of research didn’t fit well with the funding mechanisms in place. 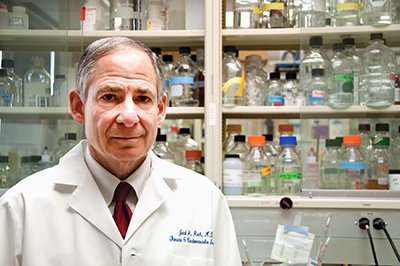 Maria Escalera is benefiting from the SPORE-funded research of Jack Roth,
M.D., who, along with colleagues at MD Anderson and UT Southwestern,
discovered a gene that prompts cancer cells to self-destruct.

Another important aspect of SPORE grants is that they require a collaborative approach — bringing many minds together to work on a project — which was a unique concept at the time.

It was Roth’s collaboration with John Minna, M.D., at The University of Texas Southwestern Medical Center, that resulted in securing the lung cancer SPORE grant for both institutions in 1996.

Since then, MD Anderson has become the top recipient of SPOREs, garnering 20% of all these highly coveted grants. The 12 SPOREs at the institution are in bladder, brain, breast, endometrial, head and neck, leukemia, lung, lymphoma, melanoma, ovarian, pancreatic and prostate. Together, they represent more than $23.3 million for translational research projects this year.

What has made MD Anderson so successful in obtaining SPORE grants? There are several factors, but according to a SPORE expert at the NCI, the institution is well positioned to compete for these grants because of its commitment to translational research.

“MD Anderson has a long history of conducting translational research in many of the areas we fund,” says James Doroshow, M.D., director of the Division of Cancer Treatment and Diagnosis, which oversees the SPORE program at NCI. “In addition, when it comes to participants for clinical trials, its patient population is better than perhaps any other institution’s in the country.”

The caliber of MD Anderson scientists is another important factor, since at least four investigators working on the proposed SPORE projects must have a proven scientific track record, as evidenced by having previously secured other grants.

“Many of our scientists have been successful in obtaining funding for their individual research endeavors,” says Provost and Executive Vice President Raymond DuBois, M.D., Ph.D. “This makes our applications even more attractive to the SPORE review committees when several of these accomplished faculty come together to work on the translational research projects. I believe another reason for our success is because we’ve invested in many of the resources required to conduct leading-edge research.”

The lung SPORE is one example where the dollars have translated the ideas of several great minds into treatments that now help people like Escalera.

Escalera was diagnosed with small cell lung cancer four years ago in Venezuela. She had heard that MD Anderson was the best place for cancer treatment, so the distance didn’t stop her from coming here.

“I have a very strong faith in God and an equally strong desire to live so I can spend as much time as possible with my family,” Escalera says. “I believe I’m doing so well because of my faith and will, but also because of my wonderful doctor.” 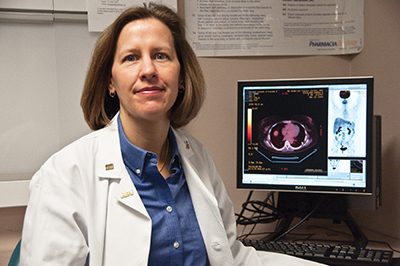 “Small cell lung cancer tends to grow more quickly and is more likely to spread,” says Faye Johnson, M.D., Ph.D., assistant professor in the Department of Thoracic/Head and Neck Medical Oncology and Escalera’s oncologist. “When Ms. Escalera first arrived, her lung cancer had already spread to her pancreas, so we were pleased that she responded to traditional chemotherapy.”

Unfortunately in 2007, Johnson discovered the lung cancer had spread to Escalera’s liver. This time, the chemotherapy didn’t produce the same results. But there was still hope thanks to Roth and his collaborators.

“We began exploring gene therapy because we were not satisfied with the results achieved by surgery, radiation and chemotherapy, especially when the cancer had spread,” Roth says. “We had two main objectives: identify a gene that would prompt cancer cells to commit suicide, and find a way to deliver that gene so it could locate and infiltrate the cancer cells wherever they had spread in the body without harming normal cells.”

Finding a gene and a delivery system

According to Roth, the SPORE ’s emphasis on collaboration brought together the strengths of MD Anderson’s scientists and UT Southwestern’s scientists to tackle the issue. Together, they found the gene they were looking for: FUS1. Through yet another collaboration with scientists at Baylor College of Medicine, they discovered the delivery system: encasing the gene in tiny balls of specially created fat, called biodegradable nanoparticles.

It was a long road before the treatment was available for patients, but the timing was right for Escalera.

“Dr. Johnson had mentioned the clinical trial before, but I declined because the drug needs to be injected every 21 days, which was difficult since we lived in Venezuela,” Escalera says. “But when the chemotherapy quit working, I was ready to do whatever was needed to beat the cancer.”

Escalera began the FUS1 nanoparticle treatment on May 18, 2009, and all indications show her cancer has been halted.

“MD Anderson has long believed in the promise of translational research, and current advances in biomedical research offer more opportunities than ever before,” DuBois says. “So, we’ll continue to invest in this important area of research, as well as be good stewards of the SPORE funding we receive.”

MD Anderson in Alignment From Pathology to Bioinformatics

In addition to committing significant resources into a large number of highly specialized services for scientists, MD Anderson has developed expertise in diagnostic imaging and biostatistics and bioinformatics, two specialties that have taken on greater importance as more and more research involves staggering amounts of data.

“Even our approach to treating cancer — which revolves around specific multidisciplinary disease sites — works in our favor, since this also is how the SPORE grants are set up,” says Robert Bast, M.D., vice president for translational research, and principal investigator on MD Anderson’s ovarian SPORE. “Not only are our oncologists experts in breast or prostate or brain cancer, but other specialists who support them — such as pathologists or radiologists — also focus on a specific cancer site.

“So, when the NCI looks to fund teams that have the best chance of turning their ideas about lung cancer into treatments, the fact that we have experts who work on nothing but lung cancer gives us a big boost,” Bast says.

Investigating the Nature of Cancer
Though they are seldom seen by patients, pathologists take the first look at a tumor, evaluate what they discover, and help answer all-important questions for physicians and patients.
Individualized Options for Prostate Cancer Patients
MD Anderson Launches Public Phase of Capital Campaign
Every cancer patient has a story.
Manage Symptoms Throughout Cancer Journey
Baseball Great Aaron Latest 'Living Legend'
New Choice for Cancer Patients in Turkey
Attacking Childhood Obesity With 'CAN DO' Attitude