“In the old days, if you had cancer, you didn’t talk about it,” says Houston oil and gas executive and former Texas Secretary of State George Strake. “People sort of whispered about it.”

But secrecy has never been Strake’s style.

So when a biopsy in December 2008 indicated he had prostate cancer, Strake didn’t go into hiding. He didn’t panic.

“I’ve always said that worry is man’s least productive emotion — not to be confused with preplanning,” he says. “I try to keep my cool.”

That’s what he did, talking to family and trusted friends, then plunging into research on prostate cancer. He even read the exhaustive “Guide to Surviving Prostate Cancer,” by Patrick Walsh, M.D., medical writer and professor of urology at Johns Hopkins University.

But, he says, the number of effective treatments — and possible side effects — was daunting. How to wade through them and choose the right option for him?

Prostate cancer will strike one in six men in the United States. More than 190,000 were diagnosed with the disease in 2009.

Searching for answers, Strake made an appointment with Deborah Kuban, M.D., professor in the Department of Radiation Oncology and director of the Multidisciplinary Prostate Cancer Clinic at MD Anderson, a clearinghouse of sorts for men facing prostate cancer.

Five years old, the clinic attracts an ever-growing number of patients eager to have a team of experts take an unbiased look at their cases.

Options include open and robotic surgery, external beam radiation, proton therapy and radioisotopic implant. There is “watchful waiting,” also called active surveillance, and newer treatments under study, such as high-intensity focused ultrasound and cryotherapy, or freezing.

Each treatment has different short- and long-term side effects and complications that will likely affect a patient’s quality of life, Kuban says.

Created to foster openness and collaboration for the benefit of men facing this disease, the clinic and its staff are determined to be responsive to patients’ needs. 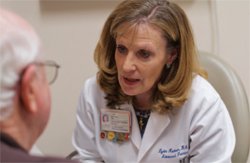 When a 2006 survey revealed that patients were interested in having a practical and comprehensible Internet site, they got one. When they asked for a step-by-step itinerary of their clinic visit, they got a “visit map” and a “treatment map.”

Clinic staffers also developed a teaching packet that contains a standard set of information for all patients that explains the options.

To encourage patients to follow up with their care team, Advanced Practice Nurse Lydia Madsen is the “point person” for every patient at the beginning and end of his clinic visit.

A typical appointment includes a visit with Madsen, a resident or a fellow and two physicians. Once the team has reviewed each patient’s case, the physicians confer, then decide on a joint recommendation for treatment.

Before they leave the clinic, patients receive a letter detailing the physicians’ consultation and recommendations. “Sometimes there’s not one best treatment,” Kuban says. “We rule out those that won’t work and give them a list of best options.”

After the huddle, an expert recommendation

Strake was impressed with his clinic visit. “Three experts talked to me in turn, then they huddled up and gave me a recommendation.” 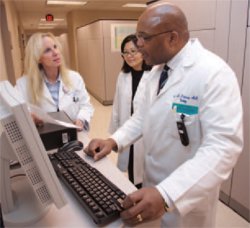 Deborah Kuban, M.D. (left), director of the
Multidisciplinary Prostate Cancer Clinic,
discusses a patient's case with Jeri Kim, M.D.,
of the Department of Genitourinary Medical
Oncology, and Curtis Pettaway, M.D., of the
Department of Urology.

He chose radiation therapy, which involved a 7 1/2-week course of daily weekday visits to the main campus’ Radiation Treatment Center.

Kuban was flexible with him, allowing him to delay treatment until after a hunting trip and a long-planned anniversary cruise.

Strake came to know many of the clinic staff, and even a year later can reel off the names of employees in a range of areas from valet parking to reception to treatment. The daily treatments also fostered camaraderie among the “band of brothers” undergoing radiation at the same time. “The other guys were great. It was a real conglomeration,” he says.

Because he continued working, Strake was grateful for the ease and speed of his daily treatments. “My appointments were at 9:00 a.m., and I was back in the office by 10:00 a.m.,” he remembers.

Working closely with MD Anderson specialists in urology and medical oncology has enriched Kuban’s experience and practice, she says. “Because you’re face-to-face, it’s helped me understand what my colleagues deal with. We get to know each other, and it’s helped improve relationships.”

And the clinic is an important step toward personalized cancer care. “We take the patient’s cancer into account, of course, but also other medical problems he may have, as well as his lifestyle, to direct him to the best treatment or treatments.”

Perhaps because they are listened to and treated as equal decision makers in their treatment, a high percentage of clinic patients — nearly 80% — decide to participate in clinical research trials.

For his part, Strake is a true believer in the open, multidisciplinary approach pioneered at the clinic. “If you can narrow down the options by yourself, fine. But I didn’t know how to go about it.”

As for the experts who studied his case and gave him a recommendation, “I got the feeling they were interested in what was best for me,” he says. “That really sold me.”

Clinical Trials: in an Investigator's Words

Christopher Logothetis, M.D., professor and chair of the Department of Genitourinary Medical Oncology at MD Anderson, is passionate about the importance of clinical trials to the future of prostate cancer treatment. He spoke with Conquest about their promise and the practical issues involved.

Christopher Logothetis, M.D.,
is chair of the Department of
Genitourinary Medical Oncology.

They span the continuum of cancer treatment, from prevention through treatment, and they always serve three masters: the patient, the science and the development of effective therapies to treat the disease.

The trial must always be in the individual interest of the patient. Patients must be well informed, and we must ensure that the risk of the trial is proportional to the risk posed by the disease.

All new studies should benefit not just the patient, but also should inform physicians on how to approach patients with similar characteristics — that is, patients with the same diagnosis and prognosis.

We are careful to give treatments a chance to prove themselves. Do they work? Do they not?

Some of the categories of new treatment development include identifying biomarkers to tell us how to derive the most benefit for patients. These markers may predict who will develop cancer, or who will — or won’t — respond to certain drug therapies. These are Phase I trials.

And finally, in Phase III, we design trials to assess the amount of improvement and measure the degree of benefit to patients nationally. In that way, we can have a national influence.

What types of patients participate in clinical trials?

Most prostate cancer patients at MD Anderson are willing to participate. They’ve been educated and informed. They know that the trial is in their personal interest, and that it will benefit the next generation.

They feel they’re part of a bigger community addressing this issue. In fact, patients and their advocates are a big driver of the research agenda.

At MD Anderson, some notable trials for prostate cancer include these, which are offered through the Multidisciplinary Prostate Cancer Clinic:

Clinical trials offer hope to patients, provide crucial data for research and are essential to finding answers in our quest to understand, treat and, someday, beat cancer.

Investigating the Nature of Cancer
Though they are seldom seen by patients, pathologists take the first look at a tumor, evaluate what they discover, and help answer all-important questions for physicians and patients.
SPORE Grants Turn Into Hope for Patients
MD Anderson Launches Public Phase of Capital Campaign
Every cancer patient has a story.
Manage Symptoms Throughout Cancer Journey
Baseball Great Aaron Latest 'Living Legend'
New Choice for Cancer Patients in Turkey
Attacking Childhood Obesity With 'CAN DO' Attitude