After 15 years teaching at Pilot Elementary School in Greensboro, N.C., she understands many children are confused about cancer and curious about her wheelchair.

“I’m always open and honest with my students. On the first day of classes, I talk about my cancer experience. This model of a skeleton helps me show which of my bones are missing,” she says while pointing to the left hip area.

She believes using a wheelchair actually has its advantages.

“I can communicate better because I’m more approachable at the students’ eye level. Also, I can demonstrate that someone in a wheelchair isn’t handicapped. In fact, I tell them I’m handi-capable,” Richardson says, “and I get great parking spaces.”

Richardson had just celebrated her 14th birthday when she felt sporadic pain in her left hip. The active eighth grader thought she had “twisted something” while playing volleyball and cheerleading.

Even with rest, pain relievers and a heating pad, the pain persisted. X-rays ordered by an orthopedic specialist found a fist-sized tumor at the base of her spine.

June 23, 1987, is a date neither she nor her parents, Lee and Betsy, will ever forget. After the biopsy was analyzed, the doctor had his diagnosis: a fast-growing terminal bone cancer titled dedifferentiated chondroblastic osteogenic sarcoma.

“I still remember the tears in my dad’s eyes when he told me,” Richardson says. “I asked him if I was going to die soon. He just shook his head and said, ‘I don’t know.’”

Despite the doctor’s prediction that she had three to six months without any treatment, perhaps two years with aggressive therapy, she and her parents “decided we wouldn’t go down without a fight. I insisted that I be part of every decision, that nothing be kept from me or sugar-coated.”

The next few days focused on library research near the family home in Metairie, La. Back then, there was no Internet or cell phones to help with their search for hope. 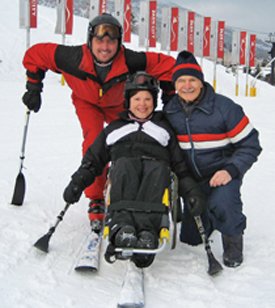 First, she would take a combination of potent anti-cancer drugs aimed at shrinking the tumor. If chemotherapy worked, Jaffe explained, surgery would follow.

Richardson vividly recalls the drugs’ side effects, especially “the shocking nerve pain, constant state of nausea and losing my hair.” Though the tumor did shrink slightly, she faced a radical operation and losing her leg.

On Oct. 26, a team of MD Anderson surgeons removed the remaining tumor along with bones and tissues in her left hip — but they did not amputate her leg. The next chapter included several weeks of intensive care, both kidney and lung failure, and receiving 200 units of blood products.

“Through it all, my family and friends helped me fight to stay positive. I was determined to live and realize my dream of becoming a teacher,” Richardson stresses.

She credits MD Anderson’s Children’s Art Project for providing a creative outlet on some of the darkest days. One of her designs led to a scarf, tote bag and Christmas card.

‘I couldn’t be happier’

“Teaching is extremely rewarding, but very challenging. There is so much for students to learn in today’s fast-paced, technical world,” she says.

Although her leg was saved, Richardson soon decided it was more comfortable and practical to use a wheelchair. “I can and do walk — on a treadmill for exercise and when I’m inside friends’ homes — but it’s very tiring,” she explains.

“My first ski trip in 2008 was fabulous. I’m excited that Russell will be able to share the fun with Dr. Jaffe (who started the ski trips in 1982), other survivors and their families,” Richardson says.

Overall, she concludes, “Cancer has given me much more than it has taken away. The trials I have overcome, the people I’ve met along the way and the lives I’ve touched in the process are priceless.”

The next step
Sgt. George Alderete, a 32-year veteran of the Houston Police Department — 12 of which were spent in the Homicide Division — has witnessed a side of death that few people see.
Countdown to day 100: signaling survivorship
Ovarian cancer survivor wears her ‘halo of health’ with pride
Leveling the playing field
It's All Happening in the Children's Cancer Hospital
Nurturing future cancer prevention leaders
Volunteer pilots help connect patients with treatment
Eight reasons to give
Medicare goes nuclear
Yoga Gets Resounding Support From NCI

Yoga Gets Resounding Support From NCI