MD Anderson’s Moon Shots Program has expanded its targets, adding some of the most intractable cancers to its campaign to more rapidly convert scientific discoveries into life-saving advances.

“Our multidisciplinary, goal-oriented moon shots programs, enabled by the deep expertise and advanced technology of our execution-oriented platforms, are poised to accelerate declines in mortality for some of the most common types of cancer,” says MD Anderson President Ronald DePinho, M.D. “After the first two years, we’re transitioning from the foundational phase to the results phase, and some moon shots already are making practice-changing advances in the clinic and in cancer prevention and control.”

All 12 moon shots have planned or opened novel clinical trials of new immunotherapies, drugs that free the immune system to attack tumors, as well as targeted therapies and drug combinations.

In the longer term, collaboration with moon shots platforms and basic scientists will heighten understanding of the molecular details of cancers, treatments and how the two interact. Ten platforms provide expertise and technology in the areas of cancer prevention and control, drug development, and big data-driven patient care and research. Many moon shots include prevention and early detection projects.

The six new moon shots began life as pilot projects that were chosen by external reviewers during the summer of 2014 from among 14 proposals. Leaders received initial funding to plan and develop their ideas a year ago.

Both pilots and inaugural moon shots were again peer-reviewed this summer by the program’s external Scientific Advisory Board, which scored all 12 based on criteria that included potential to measurably reduce cancer mortality, breadth and depth of multidisciplinary teams and quality of scientific plans. The board’s feedback helped mold priorities and funding for fiscal year 2016. 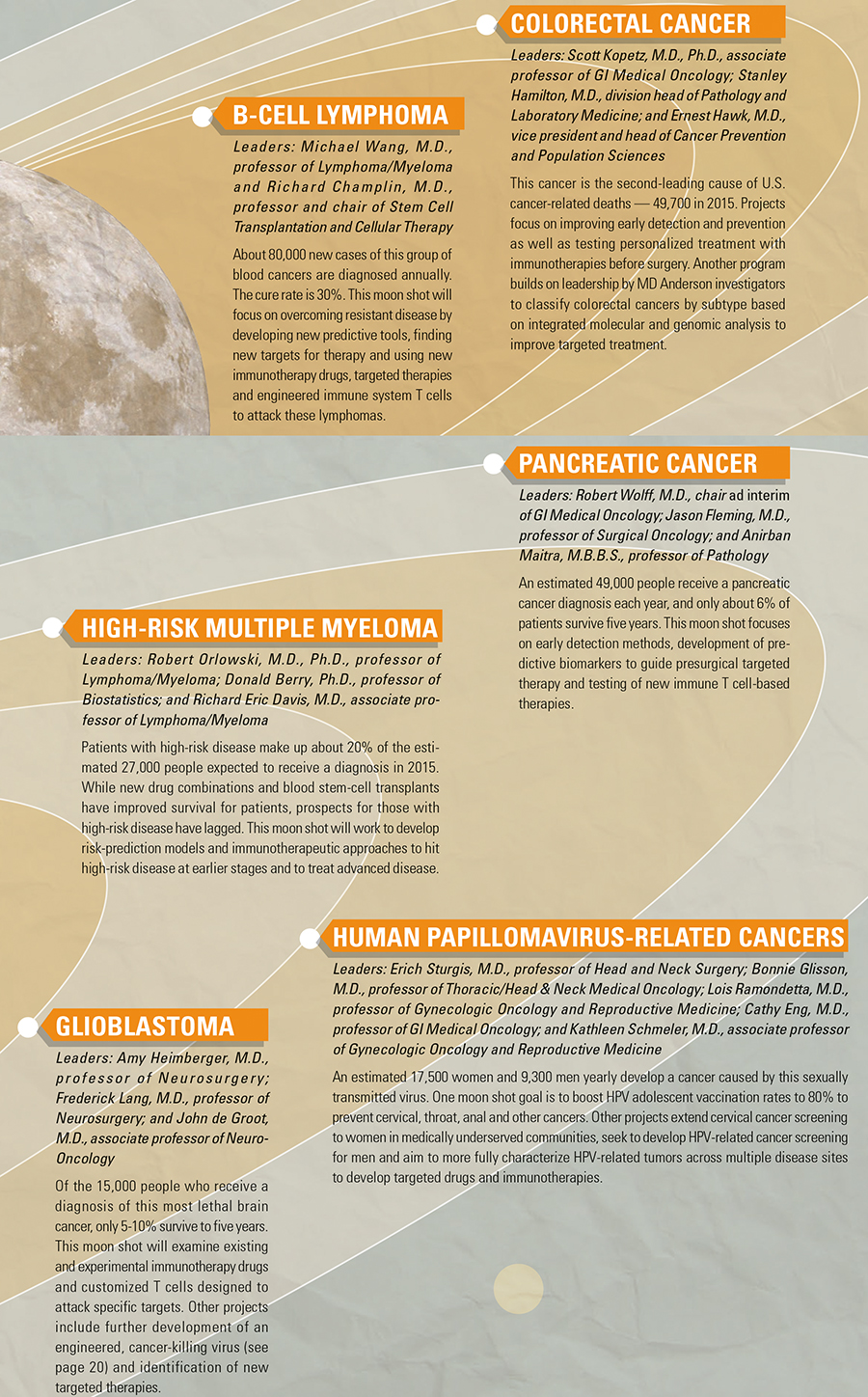 SO FAR, THE MOON SHOTS PROGRAM HAS RECEIVED $290 MILLION
IN PRIVATE PHILANTHROPIC COMMITMENTS.

By Scott Merville
Former four-star admiral tapped as Moon Shots leader
MD Anderson has appointed former U.S. Public Health Service four-star Admiral Joxel Garcia, M.D., as the inaugural executive director of the cancer prevention and control platform, part of MD Anderson’s Moon Shots Program.
Generic heart medication may improve outcomes for ovarian cancer patients
Immunotherapy drug extends survival for kidney cancer patients
Rethinking radiation treatment
People who have cancer that spreads to the brain from other sites in the body may soon undergo a change in medical care.
SPOREs bring allies together to do more in the war on cancer
MD Anderson has had the highest number of Specialized Programs of Research Excellence in the nation with its eight programs.
Quitters never win? Sometimes they do
MD Anderson’s tobacco treatment program is helping smokers beat the physical and psychological aspects of addiction
All over the map
Last year, patients traveled from more than 100 countries, 228 Texas counties, 49 states, Washington, D.C., and the U.S. Virgin Islands for the very best in cancer care.
Innovations in the OR
Surgeon scientists are testing unconventional therapies in the operating room
Unleashing the cold virus to kill cancer
MD Anderson researchers are turning the common cold virus into a cancer-seeking missile that attacks brain tumors
They are survivors. They are still fighting.
If you think cancer ends with surviving, think again
The veteran volunteer

By Andy Olin
Beyond "the fork in the road"
A program helps patients move beyond cancer by connecting them with educational and career counseling.