When they aren’t fighting cancer, these faculty and staff members are expressing themselves

Given that his father’s big band once opened for Nat King Cole at New York’s Paramount Theater, it’s no surprise that music’s in Geoff Giacco’s blood.

Giacco is among many MD Anderson faculty and staff members with artistic sides, which they pursue outside the confines of their labs, offices and nursing stations. This wealth of talent is one reason the institution annually offers avenues for showcasing creativity such as “MD Anderson Idol” and the Faculty Art Exhibition.

For Giacco, a manager of MD Anderson’s Tumor Registry, which catalogs and tracks patient information, music provides much-needed balance to his work life.

“It helps free my mind for the analytical thinking that’s required in my job as an epidemiologist,” he says. “It’s a great way to relieve the stress of the day.”

For more than 30 years, Giacco has performed guitar and vocals with his band, Cowjazz. The group can be heard on musician-development website Reverbnation and regularly plays at Houston venues such as Bohemeo’s, Last Concert Café and Natachees. Giacco’s 89-year-old father occasionally joins them on stage to play flute.

During the last three years, Giacco has been a finalist in “MD Anderson Idol.” He also participates in the employee choir.

“It’s a lot of fun to entertain my co-workers and our patients. It’s a very different experience from the normal workday,” he says.

Despite a demanding schedule, Hagop Kantarjian, M.D., chair of Leukemia, finds time to paint. In fact, many of his paintings, stunning in their use of vibrant primary colors and eclectic in style, line the hallways of his department’s suite. 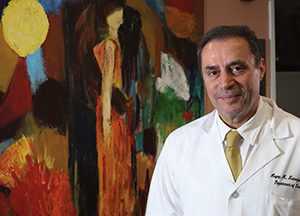 For Kantarjian, who’s modest about his artistic abilities, the impetus of his work is enjoyment, not fame.

“I’m not good enough to exhibit my work,” he says. “Perhaps never. Painting is just fun and it relaxes me and alleviates my anxieties. I will be a long-time amateur painter.”

Amateur or not, his work adheres to styles that he prefers, particularly those of an artistic movement popular at the turn of the 20th century known as fauvism. French for “the wild beasts,” fauvism emphasizes strong, bold colors. Among its leaders are Henri Matisse and André DeRain. Kantarjian’s work also is influenced by artists from other genres including post-impressionists Paul Cézanne and Paul Gauguin, and impressionist Edgar Degas.

“I call myself a post-modern surreal impressionistic neo dada-fauvist,” he says with a grin. “I love fauvistic colors, post-impressionist and abstract work. My style has evolved over the years and is often influenced by my evolving love of different artists.”

Born and raised in Beirut, Kantarjian began painting as a child, but put down his brush for several years because of the Lebanese civil war, which lasted from 1975 to 1990.

“I picked it up in 1993 under the tutelage of a Russian émigré from St. Petersburg named Efim Fruman,” he says. “I evolved with his mentorship over the next four years, and then decided to paint as I like.”

Although several of Kantarjian’s paintings depict cityscapes and urban settings — including neighborhood scenes from his childhood — he also enjoys other subjects including still life and nudes. Of the nudes, he jokes: “No one else likes them or wants them, so they end up in the garage.”

Beyond providing him with a relaxing hobby, Kantarjian says he gets some of his best ideas in leukemia research when he’s painting.

“However,” he adds, “at my age, I often forget them as soon as I leave the studio.”

During the day, Karen Stepan dedicates her time to addressing the emotional, spiritual, social and practical needs of MD Anderson patients and their families through her work with the Psychosocial Council. 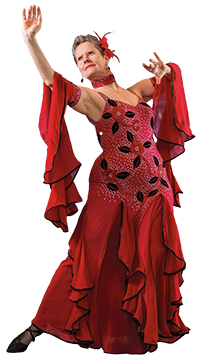 But at night, she slips on her dancing shoes.

We’re not talking about two-stepping at the local honky-tonk. Stepan is an accomplished ballroom dancer. In 2013, she won the National Dance Council of America’s World Pro-Am Bronze Rhythm Championship and took second place in the World Pro-Am Smooth Championship.

“I’ve always enjoyed watching others dance, especially in the Rodgers and Hammerstein musicals,” says Stepan. “When I was growing up, I wanted to jump into one of those stories and be part of that experience. I hope audiences I perform for feel the same way.”

Stepan’s competitive dance journey began in 2008 by training with professional dance partner Christopher Muller. She participated in local competitions, winning her dance level and age group. As her confidence grew, she set her sights on national and international competitions.

“It’s an entirely new experience at that level,” says Stepan, who has mastered the waltz, tango, fox trot, cha-cha, rumba and swing. “I really didn’t know what to expect, but I knew it would be tough.”

Dancing has also helped Stepan in her work at MD Anderson. It’s helped her lead as well as follow, which has been useful because her job calls for guiding and supporting those she serves.

“It’s important to be mindful of the balance between being a leader and a follower,” she says. “Both are important roles, and the key is being able to excel at either one.”

Although Irene Tamí-Maury, Dr.PH, says her paintings hang mostly at home or in friends’ houses, she shared her colorful, expressive work at the MD Anderson Faculty Art Exhibition in early May.

She has shown before, taking first place at an art exhibit for one of her sculptures while attending dental school in Venezuela.

Tamí-Maury, an assistant professor of Behavioral Science, gravitates toward landscapes. One of her paintings, Parakupá-Vená, portrays a magnificent waterfall in pastel tones, emulating stained glass. Parakupá-Vená is the indigenous name for Angel Falls, the world’s highest waterfall located in Canaima National Park, Venezuela. Tamí-Maury created her favorite painting, Twilight, with her son when he was 13. The work portrays moody, dark colors applied with sponges, a technique that allows colors to overlap and fade into one another. She prefers landscapes because wilderness has always served as an emotional retreat.

“Painting is therapeutic,” she says. “It provides me a sense of tranquility and helps me focus on something else besides work. It also keeps my brain oxygenated and open to new ideas and thinking.”

By Ron Gilmore
MD Anderson collaborates on world’s first skull-scalp transplant
Doctors from MD Anderson and Houston Methodist Hospital have performed what is believed to be the world’s first partial skull and scalp transplant on a man whose treatment for a rare cancer of the scalp muscle left him with a deep head wound that wouldn’t heal.
Treating the cancer patient, not just the patient’s cancer
Palliative care and hospice care aren’t synonymous. Palliative care is a branch of medicine that helps patients deal with the physical side effects and emotional stress that come with cancer treatment and diagnosis. Meet the team that improves quality of life for patients.
The engines powering the moon shots
To better understand the Moon Shots Program, we offer a look at the 10 platforms that drive the research.
Jenna Arnold is reducing risk while leaving menopause for later
Like most parents, Jenna Arnold is doing all she can to ensure that she’ll live a long life to see her son, Jack, grow up and pursue his dreams. Women such as Arnold, who carry BRCA gene mutations, are participating in a first-in-the-nation MD Anderson clinical trial to reduce their risk of cancer while leaving menopause for later.
Where in the world is MD Anderson?
The MD Anderson Cancer Network® allows the institution to collaborate with healthcare providers to provide MD Anderson’s model of multidisciplinary care to patients in the communities where they live.
The gift that’s giving life to discoveries
Ten years after San Antonio businessman Red McCombs and his wife, Charline, made a transformative $30 million gift to MD Anderson, their generosity is showing a big impact.
On track for success
Mentors’ guidance is invaluable for young scientists and clinicians
The survivor and the summit
Bree Sandlin’s inner strength and inner voice helped her conquer Stage III triple-negative breast cancer and Mount Kilimanjaro.
A new drug delivers renewed optimism
The FDA-approved lenvatinib is helping thyroid cancer patients who don’t respond to standard treatment