By combining two drugs, researchers shrank tumors in some patients with treatment-resistant Ewing’s sarcoma, a cancer that primarily affects the bones and most often occurs in teens and young adults. 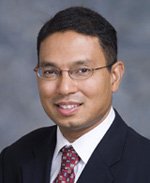 The two drugs address molecular pathways that cause cell growth and survival, abnormal blood vessel growth, and resistance to chemotherapy and radiation.

Lead researcher Aung Naing, M.D., assistant professor in MD Anderson’s Department of Investigational Cancer Therapeutics, says that prior to the Phase I clinical trial, patients were heavily treated and resisted most other treatments.

“We’re encouraged that five of 17 patients with Ewing’s sarcoma — about 29% — responded to the treatment,” Naing says. Tumors in those five patients reduced by more than 20%.

When the two drugs, cixutumumab and temsirolimus, were used as single agents, treatment results were mixed. Researchers theorized that combining the drugs would help stave off onset of drug resistance, a common occurrence and major obstacle in cancer treatment.

“By combining drugs in a scientifically rational way, we may be able to overcome resistance to single agents and provide benefit to patients with advanced Ewing’s sarcoma,” says study senior author Razelle Kurzrock, M.D., professor and chair of the Department of Investigational Cancer Therapeutics.

Reported in the March 31, 2012, edition of Clinical Cancer Research and at the April 2012 annual meeting of the American Association for Cancer Research.