A two-prong approach combining ibrutinib and rituximab (Rituxin®) produced profound responses with minor side effects in a Phase II clinical trial. Although this study has a short follow-up time, investigators are encouraged that the vast majority of patients are responding and can continue on treatment.

Reported in December 2012 at the 54th annual meeting of the American Society of Hematology.

‘Trojan horse’ assault on ALL

The findings from a “Trojan horse” assault on cancer cells have led to a new MD Anderson clinical trial for acute lymphocytic leukemia (ALL) patients older than 65.

One of the biggest complications in treating older patients for this disease is that treatments cause myelosuppression, which makes patients more vulnerable to infection. Older patients are particularly susceptible to this and other complications.

The idea is to take a very well-tolerated antibody and combine it with low-dose chemotherapy. That way, oncologists might not need to use full-dose chemotherapy and can reduce side effects.

Reported in December 2012 at the 54th annual meeting of the American Society of Hematology.

Link found between statins and IBC

The retrospective study follows a previously reported Danish study indicating there is some evidence to suggest the anti-inflammatory properties of statins could reduce the risk of breast cancer recurrence. Investigators also wanted to know if IBC was truly an inflammatory disease.

In comparison with the patients who had no record of statin use, the greatest improvement in disease-free survival was noted in patients with past hydrophilic (water-soluble) statin use. These patients showed about 50% recurrence risk reduction compared with non-statin users. 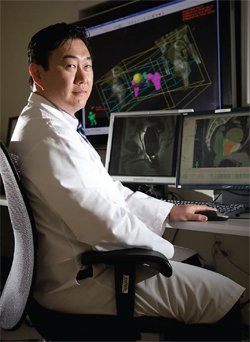 The first study was multi-institutional, one of the largest quality-of-life studies of its kind ever conducted in such a patient population. More than 1,000 patients were treated with proton therapy for various stages of prostate cancer. Information was gathered directly from men who actually underwent the therapy, rather than from their treatment providers. In the post-treatment analysis, researchers found that prostate cancer patients treated with proton therapy reported excellent urinary and bowel summary scores, similar to the healthy men in the control group.

The second study focused only on prostate cancer patients treated with proton therapy at MD Anderson. The findings complement those of the multi-center study. All of the men were treated for localized prostate cancer between 2006 and 2009, receiving different doses of proton therapy with or without hormone therapy. No meaningful difference in quality-of-life changes was found between the groups. Three years post-treatment, both groups reported high satisfaction rates with their proton therapy.

Reported at the 54th annual meeting of the American Society for Radiation Oncology. 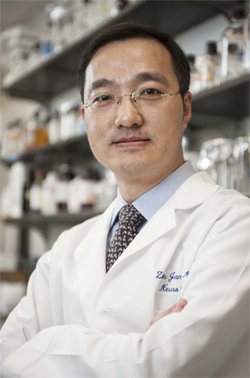 Brain tumors may have an Achilles’ heel

Researchers have tracked down a cancer-promoting protein’s pathway into the cell nucleus — and discovered how, once there, it fires up a glucose metabolism pathway on which brain tumors thrive.

They also found a vital spot along the protein’s journey that can be attacked with a type of drug not yet deployed against glioblastoma multiforme, the most common and lethal form of brain cancer. PKM2 (pyruvate kinase M2) is very active during a person’s infancy, when rapid cell growth is desired, but eventually it turns off.

Tumor cells turn PKM2 back on, and it is overexpressed in many types of cancer. To activate genes involved in cell proliferation and the processing of glucose into energy, PKM2 must get to the nucleus. If a drug can keep PKM2 out of the nucleus, it would block the cancer-promoting pathways, making PKM2 an Achilles’ heel for cancer.

Reported in November 2012 in the online edition of the journal Nature Cell Biology.

Doxorubicin has long been known to damage heart muscles, especially at higher accumulated doses. Yet, the 50-year-old chemotherapy drug remains an effective agent, used mainly in combination with other drugs against malignancies, including breast, lung, ovarian and bladder cancers, as well as leukemia and lymphoma. However, its use is limited by its toxicity to the heart, which can lead to heart failure.

Now, scientists have discovered that topoisomerase 2b (Top2b) actually drives the drug’s attack on heart muscle. This new finding provides a new approach for identifying patients who can safely tolerate doxorubicin and for developing safer drugs.

Clinical study is under way to determine whether the amount of the Top2b protein in the blood can be used to identify patients who are more sensitive to doxorubicin. Identification of high-risk patients, hopefully, will lead to close follow-up and early protection of their hearts to minimize doxorubicin’s ravage.

Reported in the Oct. 28, 2012, edition of the journal Nature Medicine.

A previously invincible mutation in chronic myeloid leukemia (CML) has been thwarted by an investigational drug in a Phase I clinical trial. All 12 patients in the trial with chronic phase CML and the T3151 mutation had a complete hematologic response (absence of CML cells in the blood) after treatment with ponatinib.

Eleven had a major reduction in CML cells in the bone marrow and nine achieved a complete cytogenetic response (no cells in the marrow). This is a promising new treatment for patients who have run out of options. Its activity against a wide variety of mutations and in patients with no known mutations suggests a broad range of efficacy.

Reported in the Nov. 28, 2012, edition of the New England Journal of Medicine.

Disparity in breast cancer treatment leads to disparity in outcomes, according to a recent study. 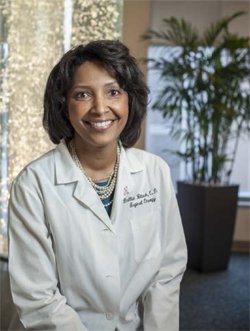 Researchers found that African-American women with early stage, invasive breast cancer were 12% less likely than Caucasian women with the same diagnosis to receive a minimally invasive technique, axillary sentinel lymph node biopsy. This procedure was accepted as standard of care for the staging of breast cancer in 2002 and became the preferred practice by 2007 when the National Comprehensive Cancer Network and other national organizations endorsed the minimally invasive procedure.

The study also found that black women who underwent the older, more invasive complete lymph node dissection had higher rates of lymphedema. Caused by blockage of the lymphatic channels, this condition can lead to significant chronic symptoms, such as arm swelling and pain.

A mother's joy, a patient's hope
Turn to The Learning Center for cancer and health information
Insights leveraged to improve outcomes
A fully integrated approach
Collaboration helps speed drug discovery
Calm in the midst of storm
MD Anderson's garden spaces are an integral part of campus design, acting as respites from the concrete, traffic and Houston heat, but playing their own surprising role in the healing process.
More than an ounce of prevention
Studies build knowledge
Military service provides ‘an accidental gift’
Experience and values shape careers and patient care
Exposing the silent killer
Intervention brings awareness to second-hand smoke exposure in households
Social media reminds patients, caregivers they're not alone

By Laura Nathan-Garner
Mexico, Texas team up to reduce tobacco use
Is your neighbor a health benefit or health risk?

Is your neighbor a health benefit or health risk?

By Katrina Burton
Angelo Rizzo and Eddy Davis
Cancer survivors use exercise during, after treatment
Happiness is a warm blanket
The Volunteer Endowment for Patient Support