Education has formed the foundation for MD Anderson since it was established in 1941 as part of The University of Texas System.

Its first formal training program began in 1949 with four histotechnology students, whose education taught them to prepare human or animal tissue samples for microscopic examination. Courses for other allied health disciplines were added over the years.

“The Bureau of Labor Statistics predicts that within a few years we will have a greater shortage of allied health professionals than nurses and doctors. Our school’s goal is to prepare more allied health specialists who are critical to MD Anderson’s continuing to lead the world in excellent cancer care and research,” says Michael Ahearn, Ph.D., the school’s founding dean.

He notes that enrollment has increased more than 10-fold — from 35 allied health students a decade ago to 367 for fall 2011.

Ahearn says one reason for this growth is more donors supporting scholarships. About 15% of current students receive financial support.

In recent years, more than 40% of the school’s graduates have been hired at MD Anderson, another 25% went to other Houston-area hospitals and the others were in high demand across the country.

Training for students interested in allied health careers is in short supply.MD Anderson’s school offers the only baccalaureate molecular genetics program in Texas and one of six accredited in the United States. The diagnostic imaging program is one of only two that award degrees in Texas.

“Our students have access to an unparalleled array of equipment, laboratories and expert clinical and teaching faculty. In addition to MD Anderson’s extensive resources, students can take clinical rotations at several other Houston-area hospitals and diagnostic laboratories,” says Ahearn, who retired at the end of August.

The most important educational advance for MD Anderson was gaining approval to award bachelor’s degrees to allied health students in 2001 and to jointly confer master’s and doctoral degrees in the biomedical sciences in 2002.

“After becoming a degree-granting institution, the next major milestone was earning an initial five-year accreditation in 2005 from the Commission on Colleges of the Southern Association of Colleges and Schools (SACS) that reaffirmed MD Anderson as a leading academic institution. SACS approved re-accreditation last year,” notes Stephen Tomasovic, Ph.D., former senior vice president for academic affairs.

Tomasovic and Ahearn have shared leadership in much of MD Anderson’s educational progress over the years. Before both retired recently, they reflected on their highly satisfying careers.

After coming to MD Anderson in 1965, Ahearn directed the diagnostic ultrastructure hematology laboratory for 23 years and then joined the Office of Academic Programs with increasing administrative responsibilities.

In addition to being the founding dean of the School of Health Professions, he has directed the Carl B. and Florence E. King Foundation Summer Programs in Biomedical Sciences for graduating high school students. He also started a summer workshop for high school science educators now named for him.

Advice from someone who’s been there

Tomasovic was recruited to MD Anderson in 1980 as an assistant professor in the Department of Tumor Biology and began teaching in the Graduate School of Biomedical Sciences (GSBS) the next year. 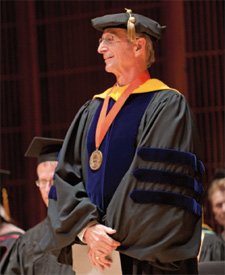 Stephen Tomasovic, Ph.D., prepares to give his keynote address at
the 2011 commencement for the School of Health Professions,
where he shared advice he had used during 31 years at MD Anderson.
Photo: Kevin McGowan

He developed the cancer biology program at GSBS, was honored as the John P. McGovern Outstanding Teacher, was elected president of the graduate school faculty and, in 1999, was named associate dean.

For MD Anderson, he served as founding chair of the Institutional Animal Care and Use Committee and the Faculty Senate. Since 1998, he has held key administrative appointments that culminated in 2006, when he was appointed MD Anderson’s senior vice president for academic affairs.

In that position, he has been responsible for coordinating policies and programs affecting more than 7,000 trainees, 1,500 faculty members and 250 support staff.

Among their many honors for educational contributions, Tomasovic and Ahearn both were inducted into The University of Texas System’s Academy of Health Science Education and named UT System Distinguished Teaching Professors.

They also shared the podium at the August graduation for 120 students at the School of Health Professions.

In his keynote address, Tomasovic told the students they will have “many opportunities and challenges as well as stress and worry” in their chosen careers.