Delving further into the soil

While Raghu Kalluri, M.D., Ph.D., professor and chair of Cancer Biology, started his career studying the cellular scaffolding of the kidney, his research focus has methodically shifted to examining other structural components, such as blood vessel formation. He’s currently interested in the cellular and non-cellular components of the tumor microenvironment.

Clearly, cancer cells depend on the cellular environment to sustain their growth and survival, which raises the question: Are non-cancerous cells unwitting participants or enabling partners? With non-cancerous cells being the major constituents of a tumor, understanding the host microenvironmental contributions (the soil) is critical to tackling this disease.

A wound that never heals

Unresolved scarring, known as fibrosis, often occurs in the kidney, lung and liver, which leads to irreversible organ damage and eventual failure. Similarly, a tumor can be thought of as a fibrotic organ that contains cancer cells.

By drawing upon knowledge from a seemingly unrelated field, LeBleu is shedding light on how cancer cells co-opt stromal cells to aid in progression and metastasis. Instead of relying on assumptions about the contribution of normal cells, detailed molecular analysis now reveals how normal tissues evolve before, during and after the emergence of metastases. This will open new avenues for the rational design of the next generation of therapeutics.

Cancer cells can be thought to resemble virally infected cells in two ways. First, they are technically considered “self” by the immune system (as opposed to bacteria, pollen, cells from another human and other materials considered foreign), as they arise from the body’s own cells — like wolves-in-sheep’s-clothing.

Second, both the originating cell (cancer or virally infected) and healthy host cells are critical for survival. Recent research has also demonstrated that the immune response is often suppressed in the tumor microenvironment. This suppression allows cancer cells to flourish.

John Miller, Ph.D., who trained as a virologist and is now a postdoctoral fellow with Lynda Chin, M.D., professor and chair of Genomic Medicine, is working to understand how cancer cells reprogram the immune system.

Because metastatic tumors are the cause of most cancer deaths, knowing which stromal and immune components alter at fertile secondary sites will provide clues to how the immune system could be reactivated to fight cancer cells.

Miller and Chin are mining genomic data from pre- and post-treatment patient samples to identify immune components that influence disease course in melanoma. With a sense of urgency to bring this to patients, Miller hopes that his work will lead to developing immune-based therapies.

Today, scientists recognize that Paget’s observations were valid and that when developing new treatments for patients, both the seed and the soil should be considered. Yet, many scientific experiments continue to rely on studying cells that are grown in plastic dishes, living conditions that are completely artificial and, therefore, inherently biased.

Once a promising target is identified, his group performs these screens in the appropriate organ context to validate the target. By directly studying patient tumor tissue samples that often resist standard of care, his research group ensures that research findings are directly applicable to patients, who currently have no therapeutic options.

In collaboration with MD Anderson’s Center for Co-Clinical Trials, they’re also generating new mouse-model systems that carefully control for lineage, genetic and microenvironmental influences. Draetta envisions that in the near future similar analyses will be available for individual patient tumors — making personalized medicine a reality. 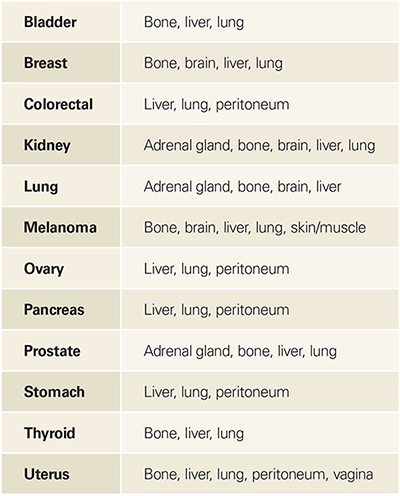 More Stories From Conquest
How MD Anderson is preparing for health reform
With the passage of the Affordable Care Act in 2010 and most provisions due to take effect in 2014, it’s reasonable to ask what MD Anderson is doing to prepare.
A drug. A disease. Three studies. Four investigators.

By Laura Sussman, William Fitzgerald and Sandi Stromberg
Creating an umbrella of care
Patients in cancer treatment often have other health issues that can affect treatment and/or quality of life. Over the past 25 years, MD Anderson has added myriad services to handle these conditions while providing quality care for patients.
A front door to answers
With longer lives come complications
Understanding complications in the midst of complexity
The tiredness that doesn't take a break
Tailored care for older patients
When joints, tendons and bones creak
Seed, soil and metastasis
In 1889, Stephen Paget, an English surgeon and pathologist, hypothesized that metastasis (the spread of cancer) did not occur randomly. It took nearly a century before Isaiah Fidler came along to prove him right.
Children's Art Project celebrates 40th anniversary
Food on the brain: Internal mechanisms behind obesity
Lipidomics, an emerging field: Where obesity, diabetes and cancer meet
No magic food: Understanding nutrition and the causes of cancer
50 years of educating scientists
As the graduate school celebrates its 50th anniversary, its two leaders assess their first year as deans and look forward to an exciting future.
Understanding epigenetics to develop new therapies
Some might call it fate. Three scientists who started their careers in different parts of the world and come from different scientific disciplines now work together at MD Anderson to develop new treatments for patients.
Building a community

By Hilary Graham
Expanding the search

No. 1 again for MD Anderson