Nurses do their best to understand the patient’s perspective as they provide care. However, none can relate as well as three MD Anderson nurses. Shelby Robin, Anna Smith and Richard Wang know first-hand the ups and downs of being a patient because they were patients themselves as children.

Related story: Through the microscope

Nurses do their best to understand the patient’s perspective as they provide care. However, none can relate as well as three MD Anderson nurses. Shelby Robin, Anna Smith and Richard Wang know first-hand the ups and downs of being a patient because they were patients themselves as children.

Shelby Robin was diagnosed with Ewing’s sarcoma, a bone cancer, when she was 12 years old. She made the difficult decision to have her leg amputated after six rounds of chemotherapy.

Refusing to let that hold her back, she went on to be a cheerleader in high school, ski down double-black diamond slopes on the hospital’s rehabilitation ski trip, become president of her sorority and graduate as the top nursing student from The University of Texas School of Nursing at Austin.

She now works full time as an inpatient nurse in the same hospital that saved her life — MD Anderson Children’s Cancer Hospital (CCH).

“As a patient, I spent most of my time with the nurses. They became my friends and were the ones who made me feel like everything was going to be OK one day. That’s what I try to do now for kids like Khrystin Andrews (above), who are going through the same thing I did.” 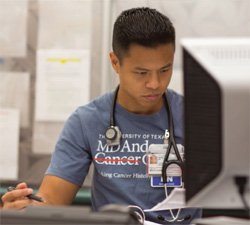 Richard Wang knows what life in the trenches is all about. At 9 years old, he was diagnosed with rhabdomyosarcoma, a soft tissue cancer, and went through chemotherapy, radiation and surgery at the CCH.

Cancer-free, Wang joined the U.S. Army and served as a medic and nurse, spending several months working with the military’s intensive care unit in Baghdad.

When he returned from Iraq, he completed his nursing degree and clinical training in MD Anderson’s sarcoma unit. He graduated from nursing school in May 2011, then joined MD Anderson as a full-time nurse on an inpatient unit.

In the summer, he serves as a counselor at Camp Star Trails, funded by the Children’s Art Project, for patients and siblings ages 5 to 12 — the same camp he attended during treatment.

Anna Smith was diagnosed with the bone cancer, osteosarcoma, at age 13, and endured a year of chemotherapy and five surgeries.

Now a nurse in the outpatient clinic at CCH, she says impacting patients in the way her nurses impacted her is rewarding but difficult at the same time.

“When I see patients come through who look just like I did as a patient, but their story doesn’t end up like mine, it makes me wonder how I got so lucky. Then, I have to stop and tell myself, ‘I’m here to do just what I’m doing right now’ — to give these kids hope and support them in their battle, to show them that they can beat this, and life will go back to normal.”

Smith serves on the hospital’s Family Advisory Council, learning from families of patients what she can do as a nurse to make their time at MD Anderson better.

She’s not only an advocate for MD Anderson patients. Smith has traveled twice to Washington, D.C., to speak on Capitol Hill on behalf of childhood cancer survivors and CureSearch. She also represents other nurses on the national steering committee for the Association of Pediatric ematology/Oncology Nurses and has served as local chapter president.

By Katrina Burton
MD Anderson No. 1 in cancer care again

Interns see their cancer up close for the first time
Chaplains bring a spiritual presence to stem cell transplants
The room is quiet, but the sound of hope still rings loud and clear as a young cancer patient prepares for his stem cell transplant.
Readers seek research, treatment news