Top
Previous Article
Next Article
Summer 2016 : What's in your genes?

Inheriting a greater risk for cancer

“I thought it might be genetic,” she says. “I worried about my family and my children.”

Hereditary cancers are caused by genetic mutations passed down from parents to children. The National Cancer Institute estimates these genetic “mistakes” play a role in about 5 to 10% of all cancers.

More than 50 hereditary cancer syndromes have been identified, and genetic tests have been developed to detect many of these.

After her breast cancer diagnosis, Nonnie Arriola, left, learned she had a BRCA1 mutation. The inherited mutation raises the risk for breast and ovarian cancers. Genetic testing also revealed her mother, Becky Carson, and her daughter, Brianna, carry the mutation.
Photo: Wyatt McSpadden

“New patients want to know, ‘Why did I get this disease and is my daughter at risk?’” says Karen Lu, M.D., chair of Gynecologic Oncology and Reproductive Medicine. “In some cases, we can actually give them that answer.”

Knowing that a particular cancer is hereditary is extremely powerful, not only for patients but also for their families, says Banu Arun, M.D., professor of Breast Medical Oncology.

“Physicians in those clinics are aware of the importance of genetic testing and champion the program,” says Arun. “The process is simple.”

Counselors first meet with patients to discuss family history and determine if testing is necessary. Patients who decide to proceed undergo a simple blood draw. Results are back within weeks. Counselors and patients discuss the results and potential next steps.

After undergoing genetic testing, Arriola learned she had a BRCA1 mutation, which significantly increases the risk of developing breast and ovarian cancers.

After completing treatment, she had a double mastectomy to reduce the risk of the cancer recurring. Earlier this year, she completed reconstructive surgery and is doing well.

First-degree relatives — parents, siblings or children — of people with cancer-causing genetic mutations have a 50% chance of inheriting the same mutation, which dramatically raises their own cancer risk.

They’re treated in MD Anderson’s high-risk clinics, where they may undergo more stringent cancer screenings, take anti-cancer drugs, are encouraged to adopt healthier lifestyles, or even have surgery to remove ovaries, fallopian tubes and/or breasts — an option known as preventive or prophylactic surgery.

“It’s a positive ripple effect for the family,” says Arun. “We’ve found when relatives are tested and take preventive measures, they can avoid the devastating cancers that run in their families.”

“My mother was having yearly mammograms but is now going every six months.

She’s also having her ovaries removed this year,” Arriola explains. “My daughter is only 20, but she’ll start screening early and is considering future options. She wants to have kids one day, and now knows she may need to start earlier than planned.” 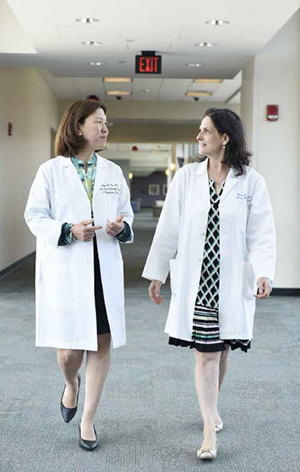 Current guidelines recommend that women with BRCA1 or BRCA2 mutations have their ovaries and fallopian tubes removed by ages 35 to 40, explains Lu, although doing so will cause early menopause.

Studies like this are made possible through information obtained through genetic testing.“We know that patient care and research goes hand in hand,” Arun says. “We need to ask and answer meaningful clinical questions while we’re seeing patients.”

Below is the National Cancer Institute’s list of the most common inherited cancer syndromes, the gene or genes that are mutated in each, and the types of cancer most often associated with them.

The Sabin Family Fellows aren’t afraid to push the limits

Broadening the immunotherapy attack
A successful immune attack that began with melanoma is being extended to other cancers
Survivor volunteer offers coffee, tea and hope to patients, caregivers
The AGCTs of cancer
How MD Anderson researchers are working with The Cancer Genome Atlas to unravel the mysteries of the disease
A Healing Light
How lasers are used to attack ‘inoperable’ brain and spinal tumors
They made Jonathan Cope’s new jaw with a 3-D printer
Plastic surgery experts are using the technology to craft customized body parts that replace those damaged by cancer
On this night, they’re not patients, just teens at prom
Prom Party Palooza gave teen cancer patients the chance to put cancer aside and just have a good time
MD Anderson is helping an at-risk group beat nicotine addiction
People with psychiatric disorders are more likely to be smokers. A new program is training community health providers to deliver tobacco cessation services.
Shorter radiation course recommended for early-stage breast cancer patients
Aggressive HPV-related cancer responds to immunotherapy drug