Gus Gutman, Bob Kukla and Larry Link probably would not have met except for being blindsided by bladder cancer.

Treated at MD Anderson for bladder cancer in 1995, Gus Gutman continues to help other patients from his home in Minnesota through Anderson Network's Telephone Support Line. Photo: Mims Photography

When diagnosed, each was 60-ish, enjoying successful careers and, otherwise, in excellent health. Today, all three are grateful survivors who through Anderson Network have extended the circle of comfort they received when confronted with difficult treatment choices.

“Hearing I had bladder cancer in 1995 was a big shock,” recalls Gutman, a Holocaust survivor whose parents fled the Nazis in their native Germany when he was 4 years old. Gutman, his wife Greta and their three children lived in Austin, Texas, where he was an organic chemist for the 3M Company and known for developing an anti-static tape for which he holds the patent.

“I was trying to comprehend losing my bladder and getting a urinary diversion bag when a nurse urged me to go to MD Anderson,” he says.

After his treatment team outlined options, Gutman decided on pre-operative chemotherapy and surgery, in which his bladder was removed and a neobladder or internal urine collection pouch was made from part of his lower intestine. More chemotherapy followed.

“When I read about Anderson Network, I called and offered to talk about my experience. It was a way to give back for my wonderful care,” says Gutman, who continues to share hope from his home in Lilydale, Minn.

Petroleum engineer Bob Kukla relocated his family 14 times during 37 years with the Marathon Oil Corporation. In 2003, two weeks after retiring as a vice president, he learned he had a rare form of bladder cancer. 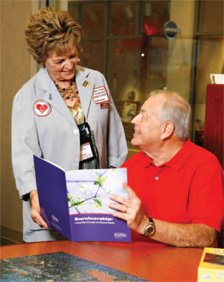 Janice Bordovsky, a cancer survivor and
volunteer in Anderson Network's Mays
Clinic Hospitality Center, visits with
Bob Kukla, who was matched with Gus
Gutman when he was diagnosed with
bladder cancer.
Photo: John Everett

“We had moved to the Houston area in 1997, so I wanted to go to MD Anderson,” states Kukla, who had four rounds of chemotherapy prior to surgery. When told he would need a urinary diversion, he asked Anderson Network for names of survivors who had undergone different procedures. One of them was Gutman.

Kukla remembers that “Gus helped me understand how the neobladder worked, how it felt, how he had returned to normal activities.”

Before leaving MD Anderson after surgery, Kukla was walking a mile a day and within a few months was back on the golf course and planning hunting and fishing trips. A high priority was offering to talk with new patients who contacted Anderson Network. He quickly became a busy telephone volunteer.

“Being a Networker is very fulfilling. I understand how scary a cancer diagnosis can be. I want to help others feel comfortable with their decisions so they’ll have no regrets,” he says.

Kukla and his wife Unna, who have three children and 10 grandchildren, are active in their church and enjoy traveling. His philosophy: “Enjoy each day.”

Larry Link was the picture of good health in 2000. His advertising business was flourishing. He and his wife, Carol, had raised three children and were looking forward to grandparenting. 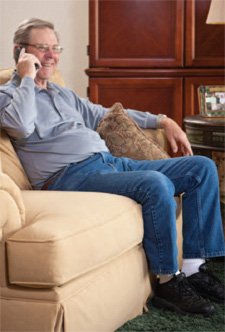 “I was devastated when the doctor said I had bladder cancer,” relates Link, who came to MD Anderson to explore his treatment options.

Since he had early stage disease, Link qualified for a clinical trial that was evaluating the immunotherapeutic agent BCG (Bacillus Calmette-Guerin). The BCG infusions worked for a while, but after several recurrences he faced losing his bladder.

Link already was an Anderson Network member who had talked with others for whom BCG was an option. Now, he needed to know about urinary diversion methods. Gutman and Kukla were among the Networkers he spoke with about the internal pouch.

“They helped reassure me,” says Link, who had his bladder removed and received a neobladder just before Thanksgiving 2007. He soon resumed swimming, golfing and fun family and church activities.

Link recently sold the last of several companies and bought a hay farm near his home in Granbury, Texas.

“The hay business isn’t too good due to last year’s severe drought, but I enjoy working a few hours almost every day on the farm,” Link says, adding, “And I’m always ready to talk to anyone about bladder cancer and surviving it.”

Anderson Network recently celebrated its 25th anniversary of providing hope and practical help to cancer patients and caregivers around the globe.

As part of MD Anderson’s Department of Volunteer Services, Anderson Network is best known for its successful telephone support service that has matched more than 25,000 patients and loved ones with survivors of similar diseases.

Anesthesiology team focuses on the patient
MD Anderson's anesthesiology team evaluates, prepares and monitors every surgical patient, helps with special procedures, conducts research and emphasizes continued education.
Anesthesiology technologists enhance OR contributions
Center takes aim at new cancer targets
MD Anderson team members dedicated to easing cancer burden of underserved patients
While the cancer journey is an individual road, there is common ground where patients’ experiences intersect, regardless of their path in life.
Faces of care
A closer look at cancer screening guidelines
If the release of the U.S. Preventive Services Task Force (USPSTF) recommendations on screening has taught us anything, it’s that not all cancer screening guidelines are created equal.
Room service part of personalized approach
Imagine ordering your hospital meals from a special menu and having them delivered by hotel-trained wait staff. Or, as a caregiver, eating well while supporting a family member.
Latest MD Anderson news