A front door to answers

While the X-ray showed a mass on Kenneth Cook’s lung, his community doctor was unsure of the diagnosis. That’s when Cook’s daughter, Brenda, stepped in. She’d worked at MD Anderson early in her career as a pharmacist. Her mother had been treated for stomach cancer at the institution. She knew it was the only place to go.

Fortunately, in the process she found MD Anderson’s Mary Ann Weiser Suspicion of Cancer Clinic, the legacy of Mary Ann Weiser, M.D., a dedicated clinician who died of metastatic colon cancer in 2006.

Carmen Escalante, M.D., professor and chair of General Internal Medicine, remembers the day Weiser came into her office. “She said, ‘There’s a problem. Many patients have cancer, but there’s no way they can come to MD Anderson without a diagnosis. I want to learn to do this.’ So she started the clinic on her own with few resources and built it into what it is today.”

“This has become an important patient service,” says John Patlan, M.D., associate professor in the department and director of the clinic since 2008. “With the patient volume having doubled in the past five years, I’m now in the clinic five days a week and gladly welcome another general internist and nurse practitioner this fall.” 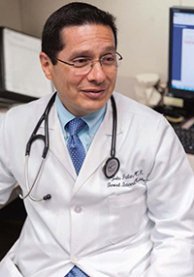 John Patlan, M.D., directs the
clinic and helps patients overcome
the unknown by getting a diagnosis
and a treatment plan.
Photo: Adolfo Chavez III

“The beginning of the cancer journey is the hardest phase of illness,” he says. “People can deal with adversity better than uncertainty. We try to help patients have a diagnosis and a plan. They can cope better when they know what they have and what to expect. Also, we’re an important point of access to care. Patients can often be seen the same day or the day after they call.”

While he’s a general internist, he says he’s learned a lot about oncology in his nine and one-half years at the institution. “In addition, I can spend more time with patients than a community doctor or a specialist.”

In the case of Cook, a diagnosis of stage 4 lung cancer brought him under the care of Frank Fossella, M.D., professor in Thoracic/Head and Neck Medical Oncology. Cook agreed to a biopsy to determine if he carried a certain abnormal gene that would suggest the benefits of a particular drug. When it was found he didn’t, he was moved under the care of Marieberta Vidal, M.D. assistant professor in Palliative Care and Rehabilitation Medicine.

With a diagnosis and his side effects under control, Cook took off for one last visit to his Arkansas hometown. That gave the man — who’d worked more than 30 years for Monsanto Oil and Chemical Company, rising from field worker to accountant with a degree in economics — time to visit with his brother, sister and childhood neighbors. And for one last time, he could stand in front of the stone World War II Memorial that bears his name.

More Stories From Conquest
How MD Anderson is preparing for health reform
With the passage of the Affordable Care Act in 2010 and most provisions due to take effect in 2014, it’s reasonable to ask what MD Anderson is doing to prepare.
A drug. A disease. Three studies. Four investigators.

By Laura Sussman, William Fitzgerald and Sandi Stromberg
Creating an umbrella of care
Patients in cancer treatment often have other health issues that can affect treatment and/or quality of life. Over the past 25 years, MD Anderson has added myriad services to handle these conditions while providing quality care for patients.
With longer lives come complications
Understanding complications in the midst of complexity
The tiredness that doesn't take a break
Tailored care for older patients
When joints, tendons and bones creak
Seed, soil and metastasis
In 1889, Stephen Paget, an English surgeon and pathologist, hypothesized that metastasis (the spread of cancer) did not occur randomly. It took nearly a century before Isaiah Fidler came along to prove him right.
Delving further into the soil
Children's Art Project celebrates 40th anniversary
Food on the brain: Internal mechanisms behind obesity
Lipidomics, an emerging field: Where obesity, diabetes and cancer meet
No magic food: Understanding nutrition and the causes of cancer
50 years of educating scientists
As the graduate school celebrates its 50th anniversary, its two leaders assess their first year as deans and look forward to an exciting future.
Understanding epigenetics to develop new therapies
Some might call it fate. Three scientists who started their careers in different parts of the world and come from different scientific disciplines now work together at MD Anderson to develop new treatments for patients.
Building a community

By Hilary Graham
Expanding the search

No. 1 again for MD Anderson