More than 42% of adults in the United States were smokers back in 1964, when the Surgeon General’s Report on Smoking and Health definitively linked smoking to lung cancer and other pulmonary diseases.

Fifty years later, the smoking rate has fallen to 18% — 42 million people less than in 1964. Despite that significant reduction, far too many Americans continue to smoke¹. In addition to heart disease, stroke, lung diseases (including emphysema, bronchitis and chronic airway obstruction) and diabetes, smoking can cause cancer almost anywhere in the body.

“The public seems to think we’ve won the battle against tobacco, but the 18% population usage has been difficult to improve in recent years,” says Ernest Hawk, M.D., vice president and head of Cancer Prevention and Population Sciences.

Motivated in large part by the daily suffering of patients and their families² stemming from tobacco use, a cross-functional team led by Hawk, who is also co-leader of the Moon Shots Program’s cancer prevention and control platform, and Mark Moreno, vice president for Governmental Relations, developed the EndTobacco program.

This comprehensive program brings MD Anderson and other leaders in prevention and tobacco control together to more rapidly decrease tobacco-related cancers³ and help end tobacco use through policy, education and community-based clinical services. Aligned with principles of the World Health Organization and the Centers for Disease Control and Prevention, EndTobacco has already taken important steps. The program began within the walls of the institution and will expand to organizations and communities across the state, the nation and the world.

“We must play a more active, intentional and productive role in making tobacco history⁴, just as we strive to make cancer history,” says Hawk. “Nothing else we do could have a greater contribution to our mission at the population level.”

Fact: nearly 16% of american high school students smoke. at the current rate, 5.6 million of those younger than 18 will die prematurely from a smoking-related illness.

Fact: when quitting smoking, the younger, the better. but quitting is beneficial at all ages. on average, nonsmokers live 10 years longer than smokers. 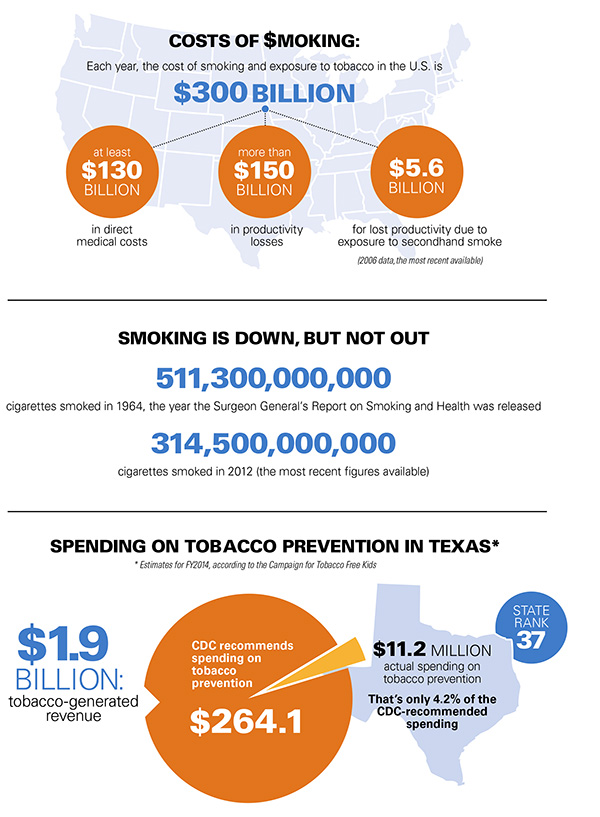 More Stories From Annual Report
Cancer can't. We can.
Improving survival with a new surgical protocol for ovarian cancer
Triathlete and marathoner Leslie Russell teaches reading to children with dyslexia in the Spring Branch Independent School District. It’s a job she loves in the community where she grew up.
Could proton therapy be the ‘holy grail’ for head and neck cancer treatments?
The good news is death rates continue to decline for the most common types of cancer, including lung, colon, breast and prostate.
Designed to greatly improve patients’ wait experiences

By Emily Watkins
Finding the least disruptive solution to get patients back on their feet
Tucked in the elbow crook of Louisiana’s eastern border with Mississippi lies the small town of Independence.
In early-stage breast cancer, a less aggressive approach can be just as effective
When treating women with breast cancer, less is sometimes more.
Anxieties are eased by talking to someone who’s been there

Anxieties are eased by talking to someone who’s been there

Patients are given a voice so they can be heard

By Lindsay Lewis
A childhood cancer survivor’s teenage worries? College and boys
Like many first-time parents, Gerardo and Dilma Camarillo worried when their 9-month-old daughter, Ivana, was running a fever. Pediatricians, friends and family reassured them.
Tiny clues left behind by cancer may help scientists solve its mystery
Tiny, virus-sized particles released by cancer cells may be the next big thing in the world of cancer biology. Exosomes, derived from cells and blood serum of patients, have been shown to detect pancreatic cancer and, possibly, breast cancer, and are also linked to increased cancer progression and tumor growth.
Grants fuel tomorrow’s cancer breakthroughs
A state of Texas program designed to expedite innovations in new cancer treatments has helped MD Anderson recruit several new faculty members during the past year.
Industry collaborations boost the immune system’s cancer-fighting abilities
MD Anderson’s expertise in cancer immunotherapy attracted the interest of four major pharmaceutical companies, which signed three-year collaborative agreements in early 2014 to develop new ways for the immune system to destroy tumors.
Developing a drug to starve cancer cells
The first experimental drug to be produced by MD Anderson’s drug discovery and development institute will kill cancer cells in a new way — by depriving them of the fuel necessary for growth and survival.
Moon Shots Program: Tracking the trajectory | 2014
Uncovering a protein’s key role in the spread of ovarian cancer

By Scott Merville
The road to recovery, minus the traffic
Marietta Cline is one busy woman. As a doctor with four children who loves to travel and build custom furniture, she’s a go-getter with little time to spare.
13 hospital systems in 11 states ... and counting

By Julie Penne
An exchange program brings the best to Brazil
As a youngster growing up in São Paulo, Diogo Bugano Diniz Gomes was fascinated by how things worked and how to fix them when they broke.
A call to action in South Texas
Since its introduction in the 1940s, the Pap test has been successfully detecting abnormal cells in the cervix that, if left untreated, could lead to cancer. In fact, that success has led to a 70% drop in cervical cancer rates in the United States.
The physician assistant will see you now
Jenny Dahl was within a semester of graduating with a nutrition degree when an invitation changed her mind — and her future.
Degrees of separation: Science stars are born at graduate school

Degrees of separation: Science stars are born at graduate school

By Ronda Wendler
The angelic side of Austin’s devilish taco king
The center that provides veterinary and preclinical research services to support MD Anderson has received new, leading-edge laboratory equipment, thanks to a $20,000 gift from Torchy’s Tacos in Austin.
Achieving a win-win-win

By Adelina Espat
With elevated risks, these survivors and ‘previvors’ aren’t taking any chances
When doctors told Mariana Torrado she had breast cancer, she didn’t believe them at first.
Solving baby boomers’ problem with hepatitis C
Baby boomers — Americans born between 1945 and 1965 — grew up in one of the wealthiest, most idealistic and physically fit generations in history.
Should you be screened for liver cancer?

Should you be screened for liver cancer?

By Katrina Burton
Outreach delivers screening and hope to communities in need
More than 3,500 local women who are low income and uninsured have received free mammograms through an MD Anderson community outreach initiative.
A survivor is saving lives through early detection
It was 1980 when Janelle Hail of Frisco, Texas, discovered a small lump during a self-breast exam. A visit to the doctor resulted in an early breast cancer diagnosis. The then-34-year-old mother of three feared for her life. Today, she attributes her survival to early detection.
4,000 miles in 70 days — and the ride of her life is just beginning