In September 2010, Harry Longwell of Dallas wrestled with a problem many fundraisers would love to have.

Fiscal Year 2010 had ended, and the chair of the most ambitious campaign in MD Anderson history was pleased to report that Making Cancer History®: The Campaign to Transform Cancer Care had met its $1 billion goal two years ahead of schedule.

But there were funding needs still unmet. Longwell, chair-elect of the MD Anderson Cancer Center Board of Visitors (BOV), challenged the campaign executive committee and MD Anderson's Development Office to raise the bar. The goal was increased to $1.2 billion, with a new target date of December 2011. 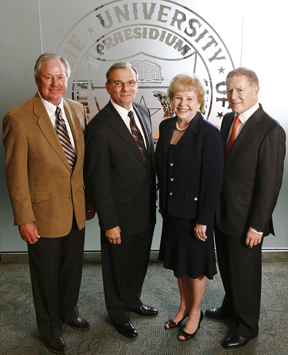 "That's our best possible gift to mankind. It's been a pleasure to be one of many who worked on this campaign. Everyone pushed a little harder, and we made it," Loeffler says.

Longwell, whose fundraising efforts for
MD Anderson go back to the Fulfill the Promise campaign of the 1990s, was fully aware of the institution's world-class reputation, leadership, generous donor base and strong volunteer support system when asked to lead the campaign.

"It wasn't a hard decision," he says. "We're all proud to have been part of this pivotal effort to transform cancer care. It's been a labor of love. Through such phenomenal generosity, MD Anderson can accomplish the extraordinary."

Among programs the campaign funds will support are:

"The effort represents confidence in MD Anderson as the world's premier cancer center," says Ronald DePinho, M.D., president of MD Anderson. "The Campaign to Transform Cancer Care completed during the tenure of my predecessor, John Mendelsohn, will enable MD Anderson to make major progress in preventing, detecting and treating cancer. We have the opportunity to do great good for humanity."

"It confirms everything we believe about the world's No. 1 cancer center," he says. "Those who invested in this campaign said, 'We believe in MD Anderson's mission to eradicate cancer — now go and make it happen.' And that's what we're going to do."

Expanding hope
For the past 15 years, Bill Hyslop’s world has revolved around quality — and numbers.
Project helps underserved in quitting smoking
“Do you smoke cigarettes now?” is an important question.
Cancer treatment opens new vistas for teenager
A youth symphony violinist, first-chair trumpet player in his high school band, varsity cross-country runner and stellar student with an affinity for physics, Shane Leonard didn’t have cancer on his busy agenda.
Quality Drives Patient Care
Institutional Review Board ensures patient safety
In 2004, James Yao, M.D., learned that one patient can open a whole new world of possibilities.
ICU team takes ventilator-associated pneumonia down to zero
When Joseph Nates, M.D., joined MD Anderson’s faculty in 2002, he discovered a high incidence of ventilator-associated pneumonia.
Seeds of Survivorship

Regional care centers add surgery
As he ends each week traveling from Katy to the Bay Area to care for his patients, Richard Ehlers, M.D., never loses sight of his calling.
Screening reduces lung cancer-related deaths
Reginald Munden, M.D., sees a light at the end of the tunnel with the release of the findings of the National Lung Screening Trial.
How one survivor copes with side effects
The mirror is not always a glowing reflection of one’s self. For Jason Cox, there was a point when he didn’t even recognize himself.
Educating Professionals and the Public
Programs take aim at shortage
Pathologist a role model for high school students
Breast Pathologist Aysegul Sahin, M.D., loves to share her knowledge and experiences with young people. The benefits are far from one-sided, she believes.
ASPIRE
A Smoking Prevention Interactive Experience
Junior faculty benefit from experienced scientists
After more than 15 years of submitting grants, Khandan Keyomarsi, Ph.D., knows what it takes to be successful. It’s this knowledge that led her to develop a program geared toward junior faculty, so they would know, too.
Health care in the community church
Cancer Prevention Researcher Lorna McNeill, Ph.D., has embarked on an important ministry.
Student benefits from mentoring
Andria Schibler hopes the yeast she uses every day will do much more than make bread dough rise. Her ultimate goal is to help improve leukemia patients’ survival.
Quality in Our Facilities
The physical expression of a vision
Facilities focus on meeting needs of patients, visitors, employees
Completion of 1MC fulfills Mendelsohn’s dream
The towering new building anchoring MD Anderson’s Mid Campus resembles a ship with its prow facing the Texas Medical Center.
New spaces meet patient and research needs
More patient beds, a firm foundation
It was all part of the initial plan. When architects, engineers and construction workers returned to MD Anderson’s Alkek Hospital in 2007, the foundation was in place.
New research facilities move patients closer to promising therapies
Advances in cancer detection and treatment will materialize rapidly in the coming decade thanks to the convergence of genome analysis, advanced imaging and the development of targeted therapies at MD Anderson’s South Campus Research Buildings III and IV.
Designers listen to end users
If you had to design a space that appealed to a 5-year-old as well as a 25-year-old, what would it look like?
Philanthropy Ensures Quality
Endowment will help children affected by cancer for years to come
When it comes to philanthropy, there are myriad ways to make a difference.
Volunteer couple shares gifts of time and money
He’s often on the golf course and you can find her riding a bike, but Twilight and Marc Freedman become a pair when they volunteer at MD Anderson.
Holiday giving program raises millions while spreading Christmas cheer
Elementary school students learn tradition of giving
Pennies on Monday, nickels on Tuesday, dimes on Wednesday, quarters on Thursday and counting on Friday.
Texas 4000 — the ride to raise research dollars
Don’t underestimate college kids. Each summer, about 50 students from The University of Texas at Austin saddle bicycles and ride for 70 days from their central Texas campus to Anchorage, Alaska.
Audio: Annual Report 2011