Rolling, rolling, rolling — the Hat Cart moves out of the Department of Volunteer Services and on toward the Ambulatory Treatment Center and even the Rotary House International Hotel.

The volunteers who push the cart, stocked with scarves, turbans, caps and other headgear, share these complimentary head coverings, conversation, resources and scarf-tying demonstrations with patients.

Collaborating with the Beauty/Barber Shop, this evening program is a labor of love for (photo, from left) Cyndi Pfeifer, Elizabeth Lucas, Janet Bennett and Christine Haman.

Used since the 1980s, it was discovered by MD Anderson’s Robert Bast Jr., M.D., professor and vice president for translational research.

Healthy, post-menopausal women participated in the ongoing study and returned annually for the simple blood test. Note: Of the five women in the study who were found to have ovarian cancer, all were early stage.

“With these findings, I’m cautiously optimistic that, in the not-too-distant future, we may have a method that detects the disease in its earliest, curable stages,” says Karen Lu, M.D., professor in the Department of Gynecologic Oncology and Reproductive Medicine and the trial’s principal investigator.

Reported in May 2010 in advance of the American Society of Clinical Oncology annual meeting.

Costly tests added to the current standard screening — cystoscopy — to check for recurrence of non-muscle invasive bladder cancer may not be so helpful after all. Besides adding to the cost, the tests also produce an increased number of false positives.

“Our findings should encourage clinicians to make more judicious use of the available ancillary ‘urinary markers,’ which would mean less anxiety for bladder cancer patients as well as cost savings for the entire community,” says Ashish Kamat, M.D., associate professor in the Department of Urology and director of MD Anderson’s Urologic Oncology Fellowship Program.

Reported in March 2010 in advance of the American Society of Clinical Oncology Genitourinary Cancer Symposium.

Although MD Anderson’s Department of Urology is dedicated solely to cancer treatment, it was rated No.10 among all types of urology programs in the nation in U.S. News & World Report’s 2010 “Best Hospitals” survey. 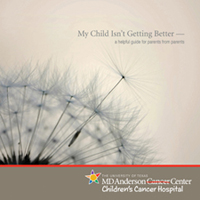 Parents have resource for end-of-life issues

As part of its family-centered care philosophy, MD Anderson Children’s Cancer Hospital has developed a resource for families facing end-of-life care for their child with cancer.

“My Child Isn’t Getting Better” was co-written by parents and staff who serve together on the Children’s Cancer Hospital Supportive Care Committee. The question-and-answer booklet provides parent-to-parent advice for families making decisions regarding end-of-life care. Hospital staff use the booklet as they counsel families.

Voices of perseverance and innovation

Tracking down, turning off cancer switches
Prime TIME for vaccine inventor
Decoding the mystery of melanoma
Transplant paves way to start family
How Do Genes Talk to Cells?
Research Briefs

Young physicians help keep her on her toes

By Mary Jane Schier
Voices of support and progress

Voices of support and progress