Matching gifts are twice as nice

Employees or retirees from participating companies work as volunteers at MD Anderson. After working a set number of hours, their company matches those hours with a financial donation to MD Anderson. The result is two gifts from one effort.

Jeff Miller’s decision to support the program started shortly after his retirement from ExxonMobil in 2006.

“I was at the Houston Marathon and overheard another runner telling about a young high school athlete who had lost a leg to cancer and was being treated at MD Anderson,” Miller says. “I’m a former youth sports volunteer and that story really touched me. I just felt I should pay him a visit and offer support.” 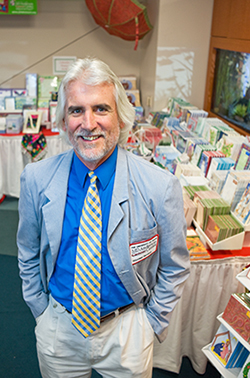 During that visit, Miller learned about the matching program and decided to enlist.

“Cancer touches so many people, including my family,” he adds. “My dad died from cancer two years into his retirement, both my brothers have had cancer and my mother-in-law, too. It was time to help.”

“Our caring and compassionate volunteers share their gifts of time, talent and skills daily to make a difference in the lives of our patients and caregivers,” says Executive Director Susan French.

Cyndi Pfeifer works for Chevron as a natural gas scheduler. After losing a close friend to cancer, she decided to enroll in the program.

She spends some of her time working on the Hat Cart, giving hats to patients undergoing chemotherapy. As a mother, she has a special place in her heart for pediatric patients.

“My heart really goes out to these kids,” Pfeifer says, “especially our teenage patients. They can be very selfconscious about their appearance and when you hand them a special hat, it can make their day.”

With the recent economic challenges many people face, the Matching Gift Program provides a way to continue financial support for MD Anderson and double the positive impact of volunteers in the fight against cancer.


Fagen has a legacy of giving

Harry Fagen left nothing to chance. The $1 million planned gift he left in his will to MD Anderson exemplifies his meticulous lifestyle and reflects his generosity to others.

For 40 years, Fagen worked as a sales representative at the Dallas Apparel Mart. He didn’t project the boisterous personality of the typical salesperson and was described as “private” by those who knew the lifelong bachelor.

Still, a closer look at his life reveals a tradition of service that continues after his death.

Born in 1923 in Teltz, Poland, he immigrated to New York with his family and grew up in the Bronx. He joined the Army Air Corps during World War II and flew 39 missions over Europe as a B-24 Liberator bombardier–navigator and was awarded several honors including the Distinguished Flying Cross.

Fagen often donated his time and money to help others. For almost a quarter century, he made dozens of donations to MD Anderson.

His will includes donations to 14 different charities, one of them a planned gift to support future pediatric clinical trials at MD Anderson Children’s Cancer Hospital, which will continue his legacy of giving for generations to come.

For more information about designating a planned gift, call 866-928-9494 or visit the Planned Giving website.

Understanding the heroic and the villainous versions of inflammation is central to the Center for Inflammation and Cancer in MD Anderson’s Institute for Basic Science.

Raising funds to support this research is just one piece of MD Anderson’s blueprint for breakthroughs in its $1.2 billion Making Cancer History®: The Campaign to Transform Cancer Care. 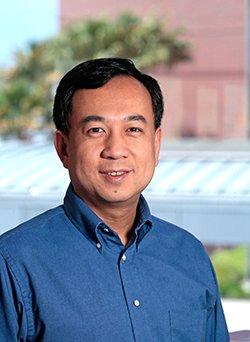 Chen Dong, Ph.D., directs the Center for Inflammation and Cancer.

Scientists know that inflammation is a response to irritation or injury that promotes healing and ties into the immune response.

“We also know cancer can subvert the inflammatory response for its own benefit to generate new blood cells, suppress the immune system and stimulate the spread of the disease,” says Chen Dong, Ph.D., professor in the Department of Immunology and director of the center.

“However, there’s a strong possibility that we can use inflammation to provoke an immune response that attacks and destroys cancer, then prevents recurrence,” Dong says. “True cures for cancer lie in our own bodies. We can generate immunity to cancer that truly eliminates recurrence.”

The center draws researchers from 10 MD Anderson departments that study the molecular mechanisms of inflammation and its role in cancer development or suppression.

Voices of perseverance and innovation

Tracking down, turning off cancer switches
Prime TIME for vaccine inventor
Decoding the mystery of melanoma
Transplant paves way to start family
How Do Genes Talk to Cells?
Research Briefs

Young physicians help keep her on her toes

By Mary Jane Schier
Voices of support and progress

Voices of support and progress